Interview with a Ute: Five questions and a blog bet with Block U

Share All sharing options for: Interview with a Ute: Five questions and a blog bet with Block U

What's up with Utah? I mean, besides an affinity for ducking the Broncos in non-conference games. Jazzy Ute of SB Nation's Block U blog knows this Utah team inside and out, and he agreed to answer some questions for us about Wednesday's Vegas bowl.

What Utah player is most dangerous? What are the Utes biggest strengths and weaknesses? Should Jazzy Ute and Kellen Moore just get a room already? Check out the Q&A after the jump, and get the details on our blog bet. 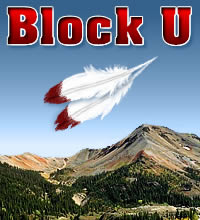 Check out Block U for the latest on the Utes and plenty of game week previews and Kellen Moore - Justin Bieber comparisons. Jazzy Ute runs himself a fine site. Many thanks to him for the lowdown on the Utes.

1. Describe your team's season to date in 100 words or less. "Tater zoobs" must be two of those words.

Utah's season started with a lot of hope and then it crashed and burned around the first of November. We're still reeling. But probably in higher spirits than you Tater Zoobs.

Shaky Smithson. He's really done it all this season. He's thrown a touchdown, returned kicks for touchdowns, caught touchdowns and I'm sure scored with your wife and or life partner. He's just that good. Unfortunately, he's also a senior and that means the Las Vegas Bowl will be his last appearance in a Utah uniform. But it's been one helluva season.

Kellen Moore, without question, is the guy Utah would love to have. Do I really have to explain why the Utes would take him? He's, in my opinion, the best quarterback in the nation.

3. Imagine for a moment that your team is ESPN's college football coverage. What part is Ron Franklin and what part is Pam Ward? (In other words, strengths and weaknesses.)

Unfortunately, Utah's strengths have been inconsistent this season. At the start of the year, it was certainly their offense. But over the last few games, that hasn't been the case. In fact, the offense was a big liability in both their losses and struggled against BYU at the end of the season. Likewise, the defense had its moments, but also struggled in the two big losses and against San Diego State toward the end of the season.

We've looked about as good as Pam Ward sounds since November and that has, ultimately, been our biggest weakness.

Our hope now is that this team can regain some of its strength with a non-injured quarterback leading the charge. Terrance Cain is, after all, 9-1 as a starter here at Utah. That lone loss was a seven-point defeat to the Oregon Ducks last year in Eugene. Not a bad resume.

The offense has to somewhat keep Utah in the game. That's going to be hard because the Broncos have a pretty spectacular defense, but I think Moore has the ability to really pick apart the Utes' secondary at times. This is going to be a game where Boise State probably rolls out to a comfortable lead of two scores and the offense is going to have to find a way to get back into the game. If they don't, it's lights out.

That doesn't mean the defense is free to take the night off, though. Hopefully they can withstand the Bronco charge, make adjustments and play very similar to the way they did against BYU. The Cougars' offense, which as I type this is wrecking UTEP, had found a great deal of life the last few weeks heading into the Holy War and the Utes were able to really keep them in check for much of that rivalry game. It won't be as easy to do against a very mature and explosive Bronco offense - but they've got to at least keep it within a close margin. Beyond that, they have to play pretty flawless out there. Boise State is the better team. Boise State should win this game. Hell, Boise State should roll Utah solely based on each team's body of work. Then again, that's what everyone thought about Alabama heading into the 2009 Sugar Bowl. We're hoping for a similar outcome to that game. If they come out and play like they did against TCU and Notre Dame, where the offense stagnates, then this won't even be a game at the half - Boise will romp.

5. On a scale of boy bands, with O*Town being not at all and N*Snync being supremely, how confident are you that your team will win on Wednesday?

I am really concerned with this boyband fascination. But I'll say my confidence is around All-4-One - or somewhere in the middle. I'm not going to count out Kyle Whittingham in a bowl game. But the odds are stacked against the Utes, so I'm not going to fool myself into believing that just because Utah has won nine bowl games, they're somehow immune to a bowl loss. They're not. All good streaks must come to an end. Hopefully it's not this week.

But I have faith and until that faith is shown to be false, I Won't Stop Believin' (hell, wasn't Journey just a boyband of the 80s?).

The stakes just got raised, people. Block U and OBNUG will battle vicariously through the Vegas Bowl with the winning blog getting a free post on the losing blog. Get ready for some fan fiction.

Good luck to Block U and the Utes, and I do not mean that at all.