Interview with an Aggie: Five questions with the USU Statesman

Share All sharing options for: Interview with an Aggie: Five questions with the USU Statesman

Want to know what's up with Utah State? Enjoy references to Hanson? Then you're reading the right post.

I employed the services of Adam Nettina, sports editor extraordinaire at the USU Statesman, to help us out by providing some inside dirt on the Aggie football team. His answers and my questions are after the jump. Enjoy.

You may remember Adam from his offseason exploits as the world's greatest WAC media days interviewer. He is destined for big things  - big, Tom-Green-in-the-Tom-Green-Show sort of things.

Check out the USU Statesman for Adam's latest work and all you need to know about the Aggies.

1. Describe your team's season to date in 100 words or less. "BYU FAIL" must be two of those words.

"At least the nation doesn't know," might be a good way of describing it. After all, this was the team that got props for nearly upsetting Oklahoma in week one, and of course initiated the massive BYU FAIL that appeared on ESPN. So the country probably thinks Utah State ain't so bad, especially considering they didn't see the same team get blown out by Louisiana Tech, Fresno State, and Hawaii, while barely getting past San Jose State and New Mexico State.

Bobby Wagner, no doubt. I realize that his 127 tackles are a little inflated when you consider the limitations of the players around him, but he's a legit NFL prospect and a great athlete. Plus, he's been known to rock the queer eye glasses with a ninja turtles backpack, and once more, he looks good doing it.

As for Boise State players, I'd pick Kellen Moore, mostly because A) you couldn't have him and B) I could remind him constantly of how he hand slaps like a little girl.

I'm not sure this team has many strengths right now. Injuries have taken such a toll that coming away with a home win over New Mexico State was cause for dancing in the streets, and even that one went down to the wire.

I will say that Diondre Borel is good for one or two "oh no he didn't" plays a game where he spins away from like 16 guys, but otherwise it's much easier to pinpoint the weaknesses. Inconsistency is a major one, as is focus level, which tends to wane as the weather gets worse and the other team scores more. I'd also throw in an identity crisis. Like Pam Ward's true gender, this is a team which is struggling to transform from what it wants to be (a spread offense with an attacking defense) to what it has the personnel for (a power offense with a bend but don't break defense.)

As for certain defeat ... Come out of the gate slow. This team does not play catchup too well. 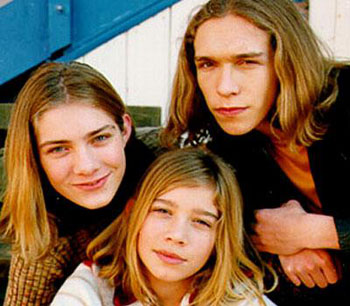 Yes, those are dudes. (via www.sugarscape.com)

Hanson. Out-of-place youngsters who had one big hit early on (BYU), endearing themselves to millions, then fading quietly while producing several wins that may or may not have actually existed (NMSU, SJSU). There is always the possibility of a comeback in the future, but it's really just a rumor that you "heard" from your sister's roommate's life partner's teenage neighbor.

Since the USU Statesman is an actual newspaper and not a random Blogspot account, there will be no blog bet with Adam. Sorry, fans of Kellen Moore fan fiction.