BIFFF on Boise State versus Nevada

Share All sharing options for: BIFFF on Boise State versus Nevada

We all know Nevada had a pretty good second half. But why exactly? We all saw that Kellen Moore and Doug Martin played lights out. How lights out did things really get?

These are the questions that BIFFF seeks to answer with some advanced stats and gamecharting. Get the details on the Boise State - Nevada game, learn from what went down, and be a better fan because of it. BIFFF stats are after the jump. Your thoughts are welcome in the comments.

The five most interesting stats from Boise State versus Nevada 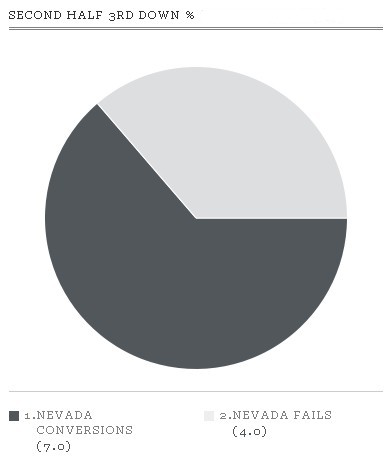 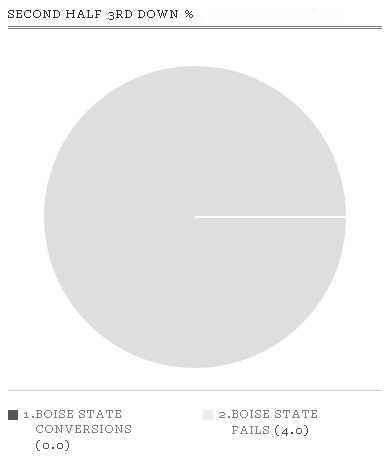 Nevada's 3rd down conversions improved dramatically in the second half, Boise State's didn't

In fact, the Broncos did not convert a single 3rd down all second half. Boise State was 0-for-4 after going 3-for-4 in the first two quarters.

Nevada, on the other hand, went 7-for-11 on 3rd down in the second half and added a 4th down conversion to boot. The Pack was only 2-for-5 in the first half. 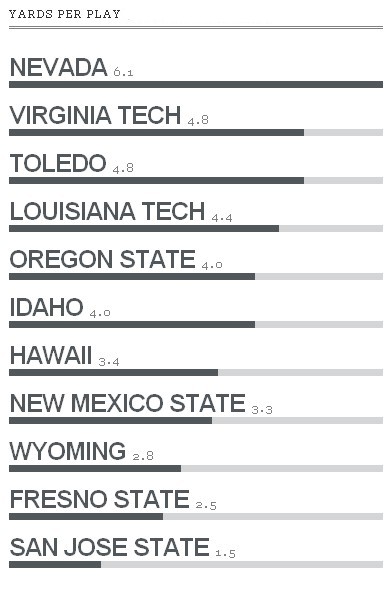 Coming into the game, the previous high yard-per-play average against the Broncos was 4.8 turned in by both Virginia Tech and Toledo. Nevada went for 6.1 yards per play, easily a season high for the Bronco D. The fact that the Wolf Pack also ran 87 plays (to Boise State's 61) makes it easy to see why we all had that inevitable sinking feeling.

You would think that the Pack's second half on offense was tons more successful than its first half. But that's not really the case. Nevada was tiny percentage points better, and that's all. For the game, they averaged less than 50 percent for successful plays (compared to Boise State's 63 percent first half).

So why the difference between the two halves on the scoreboard? 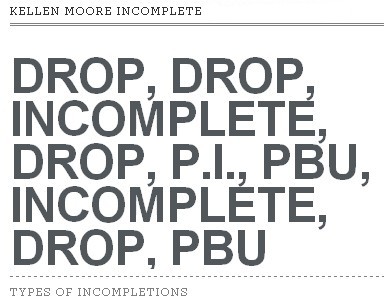 Kellen Moore threw incomplete nine times after halftime, only two were on him

Of Moore's nine second-half incompletions, four of them were drops, two of them were broken up by good pass defense, and one of them probably should have been pass interference (in the scorebook it went down as a drop for Titus Young, which is really just rubbing it in at that point).

My point: Moore was pretty much on fire all night. 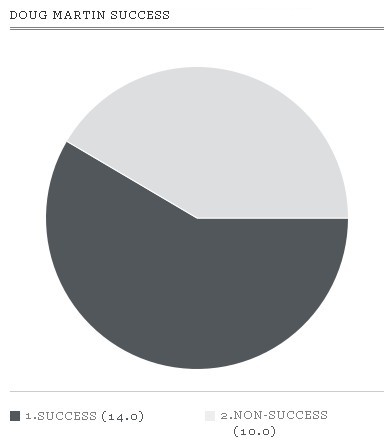 Doug Martin had successful carries 58 percent of the time

Martin was one of the game's most successful players (and more successful than the Nevada offense as a whole). His splits between first half and second half are not at all as lopsided as you might think. He was 3-for-6 on successful carries after halftime.

However, two of his most important carries - a 3rd and 1 from midfield in the fourth quarter and a 2nd and goal carry in overtime - were unsuccessful.

Did Nevada's first half and second half feel that much different to you? Would you consider Titus Young's overtime end zone pass target a drop? Glad to know that Martin was actually really good in the second half, too? Share your thoughts in the comments.