Share All sharing options for: Game Balls for Boise State versus Hawaii

Confession time. My stomach was in knots about this game. Boise State coming off a 10-day layoff against a red hot team that can throw? Crud. Mind you, I never thought Boise State would lose this one, I just thought that I'd be swearing at my TV and popping Rolaids till well after half-time. Oh me of little faith. Boise State crushed the #26 Warriors in all phases of the game (okay, not turnovers) Saturday afternoon leaving me delighted rather than shopping for a new TV. I'll never doubt the power that the "big game" has on the Broncos ever again.

After the jump, I pick out some of my most notable players, plays, and performances from Boise State's win, and you're encouraged to share your thoughts and reaction in the comments.

Ridiculous stat line of the day

Kellen Moore put on a clinic on Saturday afternoon, passing for 507 yards (more than twice the yardage of the Hawaii's entire offense) and 3 TDs in only 3 quarters of play. At one point in the game, Kellen completed 19 straight passes after an uncharacteristic Austin Pettis drop and barely felt any heat at all from Hawaii's supposedly stingy defense. Kellen was so giving on Saturday that he even decided to throw a few balls to Mana Silva. What a guy.

Player most resembling a piñata

Bryant Moniz entered Saturday's contest leading the nation in total offense. He left the game in the 4th quarter an utterly broken man.

Moniz hadn't thrown for less than 270 yards all year and was widely believed by people outside the OBNUG DQ bunker to pose a serious threat to the Boise State defensive secondary. Those people dead wrong. Moniz was held to only 127 yards passing on the day and sacked by everyone on the team but Zee the tee-retrieving wonderdog. Moniz's top target Greg Salas, the number 2 receiver in the nation was held to just 2 receptions and 10 yards on the day. In two games against the Broncos, Moniz has thrown for 167 yards and no touchdowns

Most comfortable in the middle of the field

Hawaii apparently decided early on to put their all into shutting down Austin Pettis and Titus Young, which made Shoemaker the early star of the game when he punished the Warriors time and again right up the middle of the field...grabbing 5 passes for 117 yards and a score. Then the poor Warriors decided they'd better cover Shoemaker as well and paid dearly for that, allowing single-covered Austin Pettis and Titus Young to gain 122 and 99 yards through the air respectively and rendering the phrase "pick your poison" all too real. Shoemaker, Young, and Pettis should be required to wear "Mr. Yuck" stickers at all times.

Mr. Martin easily had his worst game of the year as he was held a full 4 yards below his YPC average and fumbled in the redzone on Boise State's opening drive. Enter Sandman Jeremy Avery, who did some of the hard, punishing running usually reserved for Mr. Martin and ran the Wildcat about as well as it can be. Kudos to Chris Potter too, who threw one heckuva lead block to spring Avery for his first touchdown of the day. Avery finished 92 yards on just 10 rushes and 3 TDs.

Most useless victory of the day

Since Boise State's 35-point victory over the #26 team in the nation led them to drop in every poll but the Gallup and Rasmussen polls, I was tempted to choose "Boise State", but one victory on the day was even more meaningless—the turnover battle.

Hawaii was as good as advertised in the takeaway department, picking off 2(!) Kellen Moore passes and wrestling the ball from the clutches of Hercules himself, but in the end it didn't matter. Hawaii could convert any of the turnovers into points and it probably wouldn't have mattered if they'd had twice as many on the day.

Stephen Kinsey bringing out the hammer with Shea McClellin

The Broncos have brought out many emotions in me over the years, but "crying like a woman watching Steel Magnolias" was not one of them...until Saturday. Boise State really pulled out all the stops to grant the wish of cancer-stricken BSU fan Stephen Kinsey—making him "coach for the day" and showering him with more memories and memorabilia than you could shake a stick at. It was the sight of young Stephen walking out of the tunnel hand-in-hand with Shea McClellin that was the most memorable, however...a great reminder that in the age of computer polls and politicking, some things are much bigger than football, even if they're centered around it. This one goes right up there with the Chris Petersen Fiesta Bowl fistpump, the Ian Johnson Statue of Liberty, and Jovan Hutchinson being carried off the field in my memory bank of indelible Bronco images. Well done. 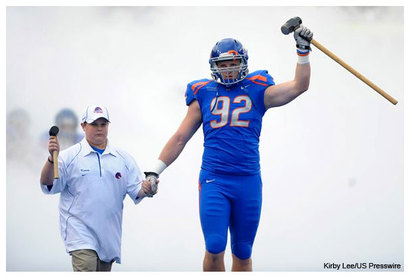 There was something in my eye, okay?

Most wide open play of the day

Still concerned about Kellen Moore's arm-strength? Titus Young has been the recipient of more Kellen Moore deep balls than anyone, but he's rarely been so ludicrously wide open as we was on the 83-yard scoring catch in the 3rd quarter. Kellen didn't get to 507 yards on the day by playing it safe, and this bomb to Young was about as good as they get.

This was a true team effort, so we're giving the ball to the entire defense. The Bronco D-line sliced through the Hawaii O-line like hot knife through butter all daylong and the linebackers and secondary put a nice warm blanket around the Warrior receivers, not giving them any room in the pass game and gang-tackling the every poor sap with the football. The Bronco D didn't get any takeaways on Saturday, but that wasn't for lack of trying. The Bronco D forced the Warriors to put the ball on the ground at least 3 times in the game, and the secondary batted and poked away a handful of Moniz passes—coupled with the mountain of sacks, the Warriors found themselves in 3rd-and-long after 3rd-and-long. They only converted 3 of the 14 aforementioned 3rd down tries 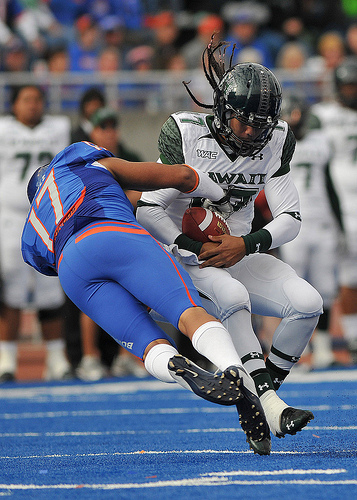 Easiest touchdown of the day

This was a close to a "gimme" as you're going to get. Up by 42 points with 13 minutes left in regulation, the Broncos 2nd team D took the field and had the Warriors facing a back-breaking 3rd down situation. It was then that running back Alex Green (Hawaii has a running back?) decided to take a leisurely 54-yard stroll to the endzone to get the Warriors off the schnide. I can tell you that this shutout-ruining touchdown doesn't fall on the shoulders of any one player...this one was a complete breakdown from the playcall, to poor tackling, to poor pursuit angles. If this happens just once a game and with the game utterly out of reach, I suppose I'm okay with that. It deserved a Yakety Sax soundtrack all its own.

Seriously, watch that TD run with this playing in the background. It syncs up perfectly. 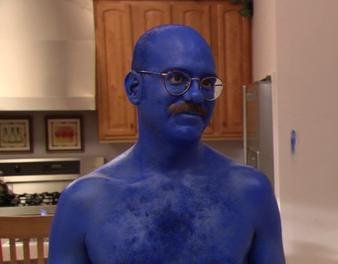 I am so proud.

Well that wasn't so bad, was it? What was your favorite play or moment from Saturday's game? Will another game on the schedule even raise your blood pressure after this shellacking? Let's hear it.