I thought about canceling game balls for obvious reasons, but that would have been doing a disservice to all the good things that happened on Friday night. Like the Muscle Hamster getting on TV again. That was awesome.

After the jump, enjoy an abbreviated version of game balls.

Player who really can't be blamed at all for this loss

Seriously, what more could the guy do? He finished the game with 334 yards passing, two scores, no picks, and made one of the game's biggest plays with his last-second bomb to Titus Young. When the offense was struggling, Moore was putting the ball on the money and running for his life. I know you win as a team and lose as a team and blah blah blah, but people are right when they saw that Moore cemented himself a Heisman invite even though the Broncos lost.

It looked like the Nevada defense did not want to tackle Martin. And can you blame them? His legs are bigger than two Chris Aults.

Best defensive play on 3rd and 1

Twice Boise State stuffed Nevada on 3rd and short thanks to Billy Winn gaining more yards toward the Wolf Pack backfield than Nevada backs did toward the line of scrimmage. If I could have bottled up that awesomeness, saved it for a quarter or two, and then spritzed it all over the team in the fourth quarter, I would have. Or I would have just bottled Rishard Matthews and kept him in there.

I love blocked kicks, so it was quite the kick in the pants to see Tyrone Crawford stuff an Anthony Martinez try in the third quarter. Plus, that block ended a 15-play drive for the Pack that resulted in zero points. I would call it a turning point if things, you know, had actually turned.

Least likely person to get a sack in this game

If you were to make a list of defensive linemen who could track Colin Kaepernick down in the backfield for a six-yard loss, chances are that T-N-T would be low on that list (alonside J.P. Nisby, probably). Well throw that list out the window because T-N-T did just that. Not bad for a guy who is twice Kaepernick's size and half Kaepernick's elusiveness. 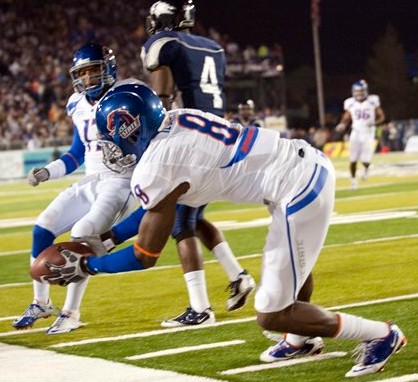 Catch of the game

His toe-tapping, sideline-straddling deflected pick of Kaepernick was a thing of beauty. Not that that any of ESPN's viewing audience saw it live thanks to an Oregon-Arizona game that would just never end.

Strategy of the game

Moch had a quiet career against Boise State until Friday night when Nevada defensive coordinator Andy Buh stole a page from the Bronco playbook and put his star defensive end in a standup linebacker position. Moch only finished with half a sack, but his pressure hassled Moore fairly often and his rushing opened lanes for the Pack's other linemen. I feel weird saying this, but Justin Wilcox would have been proud.

Player most missed by Boise State

There is no doubt in my mind that the Broncos would have been in better shape with a healthy Atkinson or Hout. If for no other reason than having an extra body, these two would have made a difference.

Gameball for appropriate horribleness: WAC officials. But at this point, don't you kind of expect that?

Most middle fingers at a game: This game.

Hardest thing for me to come to terms with: Colin Kaepernick being an okay quarterback. This one's going to take me awhile.

Hindsight award: Second-guessing Boise State not using its two-minute offense with a minute to go in the first half. If Brian Murphy's doing it, everyone's doing it.

Worst post-game coverage: KTVB. There's a line between journalism and gushing hero worship, and someone should show it to KTVB.

Uniform rumor fail: White helmets. But they're totally going to be at the Utah State game. /rumor

What players, plays, and performances do you feel deserve game balls? Do you agree with me about Kellen Moore? What about Nevada's defensive strategy? Share your thoughts in the comments.