Share All sharing options for: Final pregame thoughts on Boise State vs. Nevada

Boise State and Nevada kick off tonight (or tomorrow, depending on what part of the East Coast you live on) in one of Thanksgiving weekend's best games and perhaps one of the best Bronco games all year. You know what that means. I'm anxious and need to write my feelings.

Venting happens after the jump, including comparisons to the Hawaii game, humorous Reno polls, and Andy Staples' AP vote threat. Then it's your turn to share what's on your mind prior to tonight's game.

Programming note: Comment threads will be along in a bit for the Auburn and Oregon games this afternoon and then the official Bronco gamethread will follow.

Three weeks ago, Hawaii was the biggest roadblock left for the Broncos - a de facto WAC championship game on the first weekend of November. The Warriors were rolling through opponents, running off wins, and expected to be the toughest test that Boise State would face the rest of the way.

Hawaii turned out to be no match for the Broncos, so it was off to the next slightly overrated WAC team for BSU haters to love. That team is Nevada. And truthfully, It has always been Nevada - both for Bronco haters and for Bronco fans. Since the start of the year, this is the game that seemed destined for a heavyweight showdown, and apart from Nevada Schruting it on the islands, it is every bit that.

I never really bought that the Hawaii game was Boise State's toughest conference test. And I don't think the Boise State football team did, either. Bronco haters may go week-to-week picking a new upset special (get ready for "Utah State is a sleeping giant"), but for me, it has always been about this Nevada game. I'm glad it's finally here. And while Bronco players and coaches might not say it (and Bronco athletics certainly wouldn't let it be published), I think the team is glad it's here, too.

This topic came up in the comments earlier in the week. Nevada apparently has a really good passing game now. Colin Kaepernick thinks so. Andrea Adelson thinks so. (Coach Pete thinks so, but I take this to be some clever reverse psychology.)

Trouble is, we heard the same thing about the Hawaii defense prior to that game. And we all remember how that turned out.

Nevada may indeed have an improved passing game (just as Hawaii may have indeed had an improved defense), but I think I speak for all Bronco fans when I say that I need to see it to believe it.

In case you couldn't tell, this game reminds me a lot of the Hawaii game

And that makes me feel good.

Look what I found!

This poll was on the Reno Gazette-Journal website earlier this week. 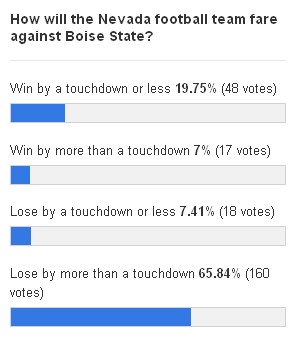 Can Boise State's defense slow down the best rushing attack it will see all year?

That was the question posed on SportingNews.com in an article about Nevada's upset hopes. The game's outcome, Sporting News figured, hinged on Nevada's run game.

Well, I am very confident - surprisingly confident, for me - that the Boise State defense will be able to shut down the Nevada running game. And just to make myself feel better about things, I'll tell you all the reasons why. Actually, that might take all day. It would probably be easier to list the few reasons Nevada might find run success tonight.

That said, the Sporting News article concludes by saying that Nevada will need to get more than its 300 yard average on the ground tonight in order to win. And that's not happening. I'd be surprised if they get 200.

Andrea Adelson, vlogger, sees this game coming down to Nevada DE Dontay Moch and whatever pressure he can or can't get on Kellen Moore.

If Moch's highlights are any indication, Boise State should maybe just try blocking the guy. It does not appear that gameplan occurred to 2009 Hawaii.

I would think that winning at all should be enough. Not Andy Staples, though.

"Since Boise State plays such a soft schedule, the Broncos must absolutely dominate to remain ranked this high," wrote SI.com's Andy Staples, a voter in the Associated Press poll who has the Broncos No. 1. "If Boise State doesn't annihilate Nevada, I'm dropping the Broncos."

To be fair, Staples is one of the few voters who has Boise State currently at No. 1. So when he means "dropping," he means it in a fairly-reasonable-and-not-at-all-Craig-James-like sort of way.

What's on your mind prior to tonight's game? Do you buy the comparisons between this game and the Hawaii game? Which game were you more worried about? Share your thoughts in the comments.