Interview with a Packfan: Five questions and a blog bet with Pistol Whipping the WAC

Share All sharing options for: Interview with a Packfan: Five questions and a blog bet with Pistol Whipping the WAC

Nevada is one of Boise State's fiercest conference rivals, if by "rivals" I mean "teams that lose to Boise State every year." They have some of the conference's best players and some of their savviest fans - if you can find them. Hint: Don't check Mackay Stadium!

Fortunately, I found one of them hanging out at Pistol Whipping the WAC, a blog-in-arms with OBNUG dating way back. Packer Backer agreed to answer some questions about Nevada, and it turned into one of the best Q&As of the season. After the jump, find out why Vai Taua > Doug Martin, why Nevada fans have reason to be confident, and what the Pack can do to win. Also, blog bet update. And a good one this time. 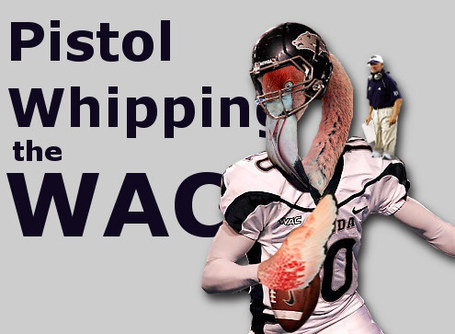 Note: Pistol Whipping the WAC does not have a logo. So I made them one.

Packer Backer joined forces with OBNUG's old friend PackFan7 to resurrect Pistol Whipping the WAC this season. He is currently in the midst of a two-part series on the Boise State - Nevada game. You should read it. Also, he's a really cool guy, and were he not a fan of one of my least favorite teams, I might not have signed him up for 50 magazine subscriptions that he didn't ask for. But I did. Sorry about that.

1. Describe your team's season to date in 100 words or less. "Keno" must be one of those words.

Nevada's season has consisted of monkeys being shed from their metaphorical back, and the team has delivered on most of the hype that preceded them. All components of the passing attack have improved, from the receivers to the touch on the passes (don't laugh), and the offense in general is more balanced. But defense is the biggest reason why the team keeps winning, with more turnovers forced and fewer points given up than before. And special teams has actually played (dare we say it) special most weeks. I don't play keno, so I'm not sure what to tell you there.

The Boise State running game has really improved from last year to this year, but I think if Vai Taua were in that backfield, it could be friggin' lethal. The Taua of Paua averages 30 more yards per game than Doug Martin and has scored nearly twice as many touchdowns. He's not the strongest or the fastest running back, but he's very patient in following his blockers and letting the play unfold in front of him before picking just the right time to make a cut through a hole and turn on the jets.

As for me, even though Nevada's pass efficiency defense is significantly better than before, they still give up a lot of yards through the air. That's why I would add a player like Brandyn Thompson to give Isaiah Frey (who has actually defended more passes than Thompson, surprisingly) some help on the corners and key in on the opponent's best receiver.

I know you're all big fans of the Pistol on here, so I won't bore you with too much gushing. All I'll say is that the passing component has really come into its own this year and has helped to make the offense truly balanced. Rishard Mathews, in particular, has been a fantastic addition to the receiving corps, and you'll see why he was recruited by Oregon before he came here. I know you don't believe us when we say that Kaep's passing has improved, but I think his current quarterback rating and completion percentage speak for themselves.

Special teams has also played an important role in Nevada's success, a big change from previous years. Even though he's a sophomore, Mike Ball is already Nevada's all-time leader in kick return yards and is a real threat to take one to the house. When coupled with Brad Langley's punting, both of the Pack's other units have usually enjoyed good field position when they take over.

Like I said before, the defense has improved enough to help rather than hinder the team in most games, but yardage-wise they still struggle. They still give up a lot of passing yards, and the run defense is a little softer than it was before. With that said, their biggest weakness the last few years has been giving up the big play - the kind of long, game-defining plays that can break a team's spirit and swing momentum away from them - and they've surrendered much fewer of those than in previous years. Even in the loss at Hawai'i, the defense held the Warriors below their season averages in many categories and made enough big plays to keep the team in the game while the offense was spinning its wheels.

Classifying the entire offense as the strength and the entire defense as the weakness may sound simplistic, but that's pretty much what it boils down to.

The first one (and most important one) is to get off to a fast start. As you're all no doubt aware, Boise State thrives on quick starts, and this has especially been true against Nevada. The Pack, however, is almost as accustomed to being ahead as the Broncos are this year. If they start the game on defense, keep Boise out of the end zone. If they start it on offense, for the love of Jebus don't go three-and-out. The only way everything else can begin falling into place is if Nevada beats them to the opening punch.

Secondly, use the pass to open up the run. The biggest reason (to me, at least) why the Pack lost at Hawai'i was that the team was reluctant to pass on first down as often as they had in earlier games. They ran instead, and when Hawai'i stopped those runs the team panicked and it resulted in 3rd and long situations with predictable passing plays that also didn't go anywhere. The pass was a point of emphasis against New Mexico State last week for obvious reasons. They have to believe they can move the ball through the air, even if they're still a running team at heart. Knowing what will no doubt be done to contain the option run plays, they have to make BSU respect the pass as a means of opening up the run. For an example of what this would look like when executed well, take a look at Nevada's win over Idaho on November 6th: 391 passing yards with 6 touchdowns and 451 rushing yards with 3 more touchdowns.

Finally, they have to win the turnover battle. Simply put, Boise State doesn't make a lot of mistakes when they have the ball, so when they actually do make them -- whether from a big defensive play or old-fashioned dumb luck -- you HAVE to capitalize. If you don't, things can have a way of snowballing very badly from there. Any chance Nevada has of staying in the game for all four quarters rests on their abilities to keep the ball when they have it and take it away when they don't.

Aside from failing to do any or all of those three keys, one thing that would pretty much guarantee a loss is if their final stats are more than 100 yards off of their season averages (Passing for fewer than 130 yards, running for fewer than 200 yards, etc.).

5. On a scale of boy bands, with O*Town being not at all and N*Snync being supremely, how confident are you that your team will win on Friday?

Interesting scale. Boise State is the more complete team from top to bottom, no question. But I think the most important intangibles - Senior Day, the home crowd, and the respective pressures the two teams will be under - favor Nevada. Mistake-free football still has to be played if Nevada is to have any chance of pulling the upset, but if any Nevada team under any circumstances is capable of doing just that, I'd say it's this team under this week's circumstances. By the OBNUG Boy Band Confidence Scale, I'd put it at about 98 Degrees, which (if I'm filling out the rest of the scale appropriately) would be above LFO but beneath the New Kids on the Block -- about a 7 on a scale of 1 to 10.

I know a lot of you (two of you?) have been clamoring for the Hawaii blog bet for weeks now. Well, I have good news. Check back on OBNUG tomorrow afternoon - yes, as in Thanksgiving Day - and I will have a surprise for you.

More good news: Pistol Whipping the WAC has agreed to participate in the blog bet with us this week. The terms are the same. Winning teams' blog gets a free post on losing team's blog.

Good luck to Pistol Whipping the WAC, and I do not mean that at all.