Share All sharing options for: BIFFF on Boise State versus Fresno State

The Boise State defense held Robbie Rouse in check on Friday night. But exactly how much did they make him look like Yonus Davis? The Bronco offense turned it on in the second half. Just how good were they?

These are the questions that BIFFF will help you answer thanks to some advanced stats, gamecharting, and nerdism. Go inside the numbers on Boise State's win over Fresno State and see which stats stood out and what they might tell us about the Broncos this week.

The five most interesting stats from Boise State versus Fresno State 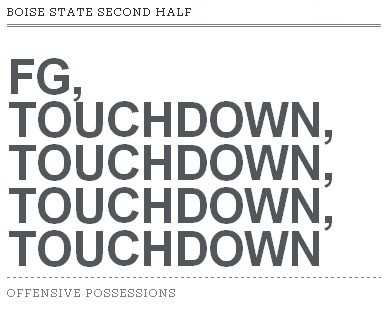 Boise State scored on every single second half drive

The Broncos punted only once on Friday night, which is not bad for an offense that looked decidedly un-Bronco at times (and that one punt could have been avoided if Gabe Linehan was into catching perfectly thrown balls). The Broncos added a field goal after the punt for a 20-0 halftime lead and never looked back. After a second-half first-drive field goal, Boise State went for touchdowns on its next four consecutive possessions, and it was game over in a big way.

POWER is a stat that measures an offense's efficiency in 3rd and 4th down short yardage situations as well as short goal-to-go. For a successful POWER attempt, a play must be a run on third or fourth down, two yards or less to go, that achieved a first down or touchdown. It also includes runs on first-and-goal or second-and-goal from the two-yard line or closer.

This stat takes on added meaning when you consider the relative struggles it seemed the Broncos had in short yardage on Friday. Twice they settled for 20-yard field goals. But it wasn't all bad.

Boise State was 3-for-3 when they ran the ball on 3rd and short, including a TD run by Doug Martin. The only times they failed on 3rd and short was when they passed - an incompletion by Moore near the goalline early in the game and Linehan's drop later on.

All this to say, Boise State should be okay in its short yardage offense. Especially against Nevada. 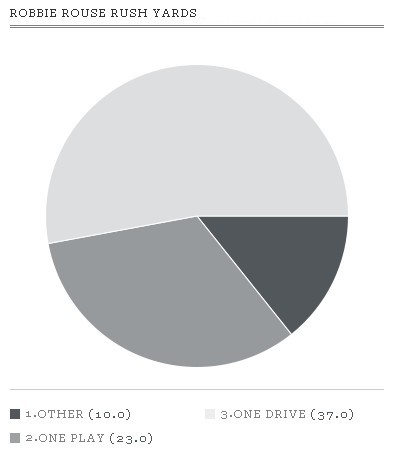 Fresno's leading rusher and a leading candidate for first-team All-WAC, Rouse finished the night with 70 yards on 17 carries. One of those carries was a 23-yard burst early in the game. Six other carries came on Fresno's last drive against B-teamers when Rouse gained 37 yards. The rest of his carries: basically nothing.

Boise State was nearly perfectly balanced on 1st down, Fresno State was not

The Broncos have trended a little more heavily toward run plays on 1st down this year (197 to 140), but on Friday night, it was nearly a perfect split. The Broncos ran the ball 20 times and passed 19 times.

Fresno, on the other hand, was off all night. The Bulldogs called 13 first down pass plays to only eight first down run plays. Oddly enough, in the first half, Fresno only called three runs on 1st downs. The other eight calls were passes. Strange strategy for an offense that was built around Robbie Rouse's running. (Shades of Hal Mumme and New Mexico State in 2008 when Mumme eschewed constant passing for constant running, which the Aggies weren't very good at.) 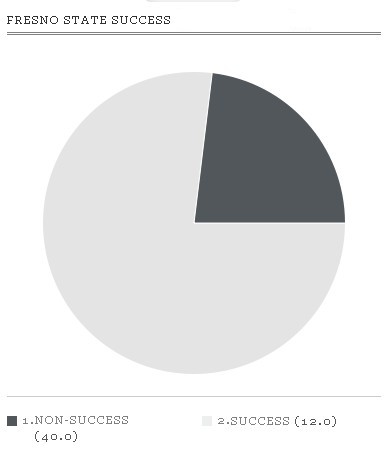 Fresno State had a successful play 23 percent of the time on Friday. It might sound like a lot, considering the depth and breadth of Boise State's dominance. But five of those 12 total successes came on their last drive. And of course, Fresno only had one successful play on 3rd down - a 21-yard completion on 3rd and 20.

What do you make of these stats? Can numbers ever quantify Boise State's defensive prowess? Glad to see that the Bronco offense was better than it may have looked? Share your thoughts in the comments.