BIFFF on Boise State versus Idaho

Share All sharing options for: BIFFF on Boise State versus Idaho

The Broncos dominated the Vandals on defense. But how lopsided was it really? Kellen Moore rarely plays in the fourth quarter. How ridiculous is that getting?

After the jump, I apply the advanced stat power of BIFFF to the Boise State - Idaho "rivalry" game and see what shakes out. Study up on some new stats, find out how ugly this thing really was, and be blown away by how little Kellen Moore throws late in games.

The five most interesting stats from Boise State versus Idaho 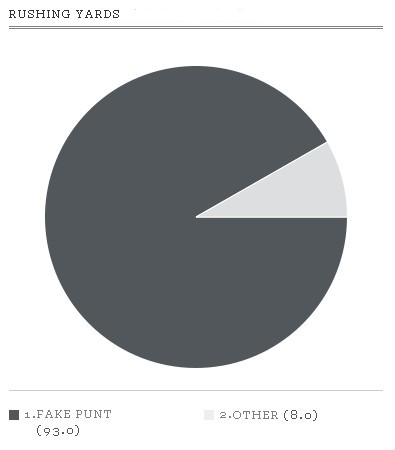 I really hope you have seen this stat already since I know it would bring you great joy. The Vandals only really had 8 yards rushing on offense. How great is that? Compared to last year's Vandal ground attack, which posted xx yards, I'd say the Broncos are better against the run and Idaho is far, far worse with the run. 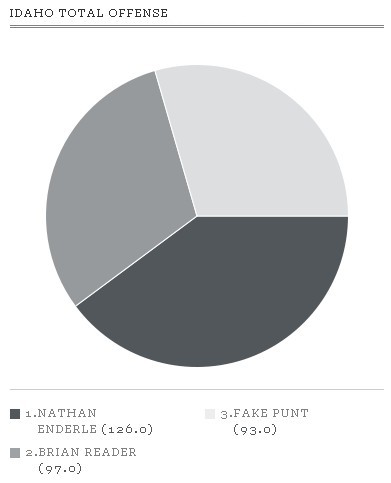 The box score will say 316 total yards, but 93 of those were on the two fake punts and 97 came with backup Brian Reader at the helm. Nathan Enderle and the Vandal offense was not good against Boise State and the Broncos' No. 1 defense. 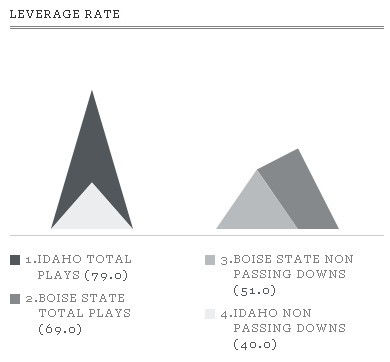 Boise State's defense kept the Vandal offense in passing downs almost half the time, and not vice versa

Non-passing downs: defined as all first downs, second down and 7 or less, or third/fourth down and 4 or less

Offensive line stats! They exist! Thanks to the guys at Football Outsiders, there is a stat to measure the effectiveness of offensive line blocking. The idea is that the line can be credited with a certain percentage of yards gained at or near the line of scrimmage, with an increasingly smaller percentage the farther past the line you get (when wide receiver blocks and sprinting have more to do with yards gained). Here is the specific breakdown that Line Yards uses:

Rushes (not including QB or WR carries) are broken down into four categories: losses, 0-4 yards, 5-10 yards, 11+ yards. The following formulas are then applied: losses count for 120 percent, 0-4 yards 100 percent, 5-10 yards 50 percent, 11+ yards zero percent. A carry can fall into more than one category. For instance, an eight-yard carry would earn six line yards. Max per carry is 7.

Confused? I don't blame you.

Well, know this. The Idaho Vandals had a Line Yard per carry average of 1.4. The Boise State offensive line had a 3.5. Score another for the Broncos.

The breakdown of Boise State's total fourth quarter passing looks like this (big tip of the hat to MKingery for assisting on this stat):