Share All sharing options for: Game balls for Boise State versus Idaho

Boise State ran its winning streak against Idaho to 12 and did so in dominating fashion on Friday night. And thus ends the BSU-Idaho rivalry for now, if that's what you even want to call it.

Before we say good-bye, I have some game balls to hand out to the best players, plays, and performances from Friday night's 52-14 win. Was Kellen Moore your player of the game? Which throw was Nathan Enderle's worst? And was the first quarter against Idaho Boise State's best quarter of the year? This and more, after the jump.

And in other news, Antarctica is cold and Bill Hancock makes six figures for doing nothing. 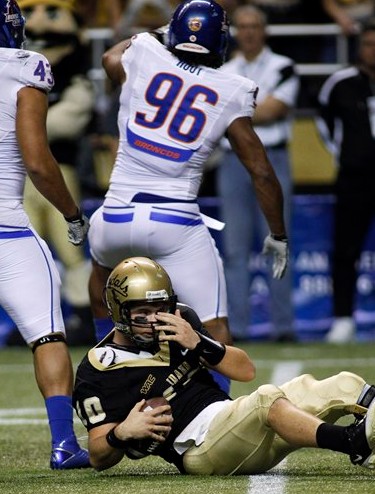 Nathan Enderle throw of the night

The one right to Aaron Tevis

And Mel Kiper thinks Enderle has pro potential? Well, I guess that could be true, considering that the Broncos are better than most of the NFC West. He's a pudgy Alex Smith. How can San Francisco pass that up?

Punt return of the year

I couldn't imagine Titus Young doing it any better, and that is probably the best compliment I can think of for Potter's 76-yard TD return on Friday night. He crashed through three different waves of Vandal defenders, breaking tackles and side-stepping as if the players around him were moving in slow motion. And then once he hit the clear, Potter was pulling away from the nearest Idaho player. It was an altogether surprising, perfect way to kick off an excellent first quarter. Speaking of which ...

Best quarter of the year

This one should probably be up for a vote, actually. The Broncos have played some pretty good quarters this season including the first quarter against Virginia Tech and the first, second, and third quarters against Hawaii (am I missing any others?). But to jump out to a 28-0 lead against the Vandals, in Moscow, could not have been planned any better. It was exactly what the Broncos needed to do to make a statement and breeze to a comfortable victory.

Game ball for boldest call of the night

No, I'm not choosing either of Robb Akey's fake punt calls because those were more out of desperation and fear of punt blocks/returns than they were out of foresight. Coach Pete's onside kick was an aggressive, savvy, well-timed choice to bury the Vandals when they were reeling. Too bad the kick scurried out of bounds before a Bronco player could recover it.

He's like a high metabolism Tommy Gallarda, except from outside the red zone.

Cornerback of the night

Both CBs made plenty of plays against Idaho's No. 4 passing game. Thompson finished with two picks and nearly had a third that would have been a sure pick-six. Taylor held his own on multiple occasions as well. Have the Boise State corners suddenly gone from a team weakness to a team strength? And why wasn't I told about this? I could have dispensed with a fair amount of worry over the past few weeks.

Best spelling by University of Idaho students maybe ever

H/T to Webster's unabridged dictionary, I would assume.

Jackson called Bob Kustra a "blue and orange snot" in the week leading up to the game and then proceeded not to play at all, which is the exact opposite of putting your money where your mouth is.

Did you vote for Kellen Moore or Doug Martin for player of the game? And why? Was the first quarter Boise State's best of the season? If not, what was? Share your thoughts in the comments.