The more things change, the more they stay the same

Share All sharing options for: The more things change, the more they stay the same

Coaching the Broncos: Causing indigestion since 1947.

Stop me if you've heard this one...a team goes undefeated two seasons in a row, but still can't defeat pollster bias by failing to rack up enough "style points". You've probably already guessed by now that the team I'm talking about is our very own Broncos, but no...I'm not talking about the most recent poll snubs, or even the two other undefeated seasons that failed to get Boise State to the promised land ('04 and '08). You see, as much as poll-watching and poll-snubbing has become a part of life for current members of the Bronco Nation, it was a way of life for your grandparents as well. After the jump, take a look at an eerily similar situation that the 1948 Bronco team found themselves in.

First off, a huge thanks to poster southendzone8 for forwarding me this historical artifact...and to his grandfather William Hochstrasser who passed it along to him. I've highlighted Hochstrasser, who was a placekicker and backup QB on the 1948 squad, in the photo below. By the way, having your grandpa play for Lyle Smith makes him the coolest grandpa ever (unless your grandpa shot Hitler or something). 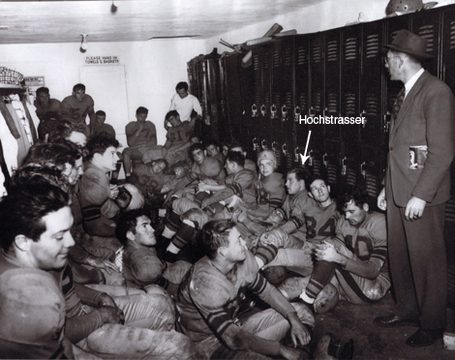 Anyway, Lyle Smith's 1948 squad (above) went undefeated for the second straight year but was still passed over for inclusion in the Junior Rose Bowl based in small part on geography and in large part because they failed to blow out opponents sufficiently to earn "style points"...a game that coach Lyle Smith simply refused to play—sound familiar?

The entire blurb is below, and while it's worthwhile to read the entire brief column, I've taken the liberty of highlighting some of the more striking similarities between this bygone Bronco squad and our own current one. 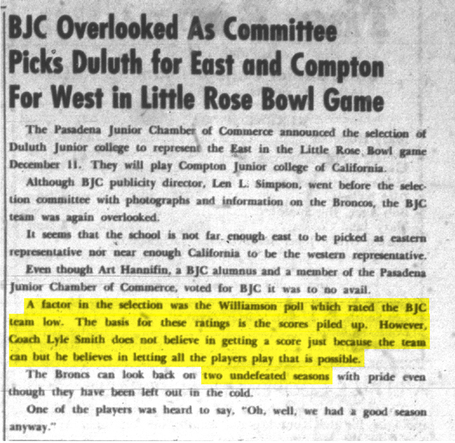 Looks like winning with class and integrity has been a thorn in the Broncos' side for much longer than we might have originally suspected...but I still maintain that a system that fails to reward this type of coaching philosophy is the one that needs changing...the Broncos just need to keep winning.