Share All sharing options for: Final pregame thoughts on Boise State vs. Toledo

Toledo is not New Mexico State, so Saturday night's game should be a tad more competitive than last week. Although, maybe not if OBNUG's predict the score comments are any indication.

Toledo has a great defense, unless it doesn't

Honesty check: All week I have been somewhat nervous about the Toledo defense taking on the Boise State offense. "The Rockets are a dangerous defensive team," I've been told. "Their linebackers Greek tackling gods."

Makes sense, right? Good defensive teams can keep the score down, the margin tighter, and pull off more wins with fluky plays or timely drives. Therefore, the better Toledo's defense, the better chance the Rockets have of winning on Saturday night.

Turns out, though, that Toledo's defense might not be all that great.

Per Dave Southorn at the IPT, the defensive stats on Toledo are not all that daunting:

This not the Alabama Crimson Tide we're dealing with here. Toledo's defensive strength is making plays via sacks, fumbles, interceptions, and the like. That is their defensive calling card, not necessarily stopping people from gaining yards, which just so happens to be a pretty important part of football.

Kellen Moore pointed out this week that Toledo's defensive ranking can be misleading since the Rockets have faced two of the Top 25 passing teams in the nation (Arizona and Western Michigan). But isn't Boise State also one of the Top 25 passing teams? And if Toledo was good against the pass wouldn't teams stop passing against them and go to the run? It's similar to how Nevada was ranked high in run defense a couple years back because why run when you can pass for 10 yards every time?

But enough about Toledo. What is Boise State going to do on offense to counter the Rocket D? Whatever works, natch.

"I think (Toledo's pass defense rating) is very misleading," Moore said. "You don't see too many clips with two running backs in the backfield against these guys. They've been playing a lot of teams that like to spread it out, throw the rock. We'll show both sides of that and see what works most efficiently on Saturday."

We may need to re-name the Wild Avery formation

I talked yesterday about what Chris Potter might be able to do in Boise State’s wildcat formation. Turns out coach Chris Petersen is all about that scheme and the variety of players he might be able to use that way. He said on "Coach Pete Live" last night that there’s a lot of work being done on the wildcat.

For some reason, I really enjoy USA Today's team notes features on the Broncos and their opponents. Maybe it's because USA Today writers love Boise State as much as I do and aren't afraid if the whole world knows. Yeah, that's probably it. Some choice descriptions from this week's story.

The Rockets will go to extremes - the notorious blue field - to find out what they are made of, and more.

The Rockets are the next victim on the altar of the blue field, and despite their success on the road this season, there is little reason to assume that Toledo can make this much of a game.

The Rockets (3-2, 2-0 MAC) have defied the norm by going unbeaten on the road, and dropping both of their home games. Unbeaten and fourth-ranked Boise State will make it next to impossible to continue that odd trend.

Actually, I take that back.

As Cripe notes, Boise State is kind of sucking it up on punt coverage and kickoff coverage. As Cripe also notes (albeit unintentionally), none of these guys really play on either of those.

In fact, Hout and Paul left special teams coach Jeff Choate a note on the whiteboard in his office. They requested to fill certain roles on the punt-return team.

If we can assume Cripe means that Johnson plays on kickoff coverage (rather than kickoff return), that would make one of the four new guys who would actually have an impact on the special teams areas that are hurting the worst for the Broncos.

But man, that punt return team is going to be something special. 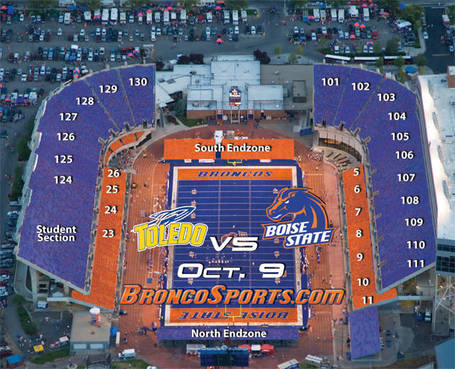 No psychedelic pinwheel? Must not be a big game. (via image.cdnl3.xosnetwork.com)

Could the Toledo Rockets be a less interesting opponent than the New Mexico State Aggies? Sounds that way from the lack of anything compelling going on with this game in the media.

The biggest storyline is that Boise State has never played Toledo, and I'm not entirely sure that counts as a storyline. I can't wait to see how the WAC TV team sets the table during pregame for this one. Thank goodness Dick Tomey isn't on the scene.

Does this week feel unusually quiet to anyone else?  Let me know if you're with me.

What do you make of Toledo's defense? Will Boise State's new special teams player make much of a difference? Would you rather I stop talking about Toledo because they're a snoozefest? Let me know in the comments.