Share All sharing options for: BIFFF on Boise State versus New Mexico State

We all know that Boise State's 59-0 win over New Mexico State was a complete and utter domination. But how completely and utterly? We all know that Jarvis Hodge and Michael Coughlin had career days against the Aggies. But just how good were they?

These are the questions that BIFFF seeks to answer via the enlightening medium of game charting. Join me after the jump for a look at some advanced statistics and game notes that you can't get anywhere else. Conclusion: Boise State is good and New Mexico State is less so. Stats never lie!

You can learn a lot from ESPN's box score, or you can learn everything you ever wanted to know plus stuff you didn't by reading the BIFFF box score.

Marcus Allen was not a factor whatsoever

Allen came into the game averaging 108 yards of total offense each week. He had three catches for 46 yards against Boise State. He was Rodgers'd minus the concussion.

Two Aggie carries netted nearly a third of their total team rushing yards (37 yards on 2 carries). Take away those two, and NMSU has 81 yards on 39 carries, for a robust 2.1 yards per. 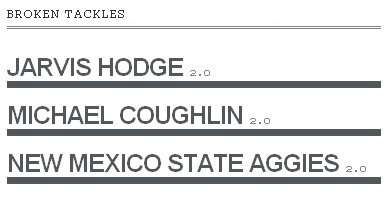 Hodge broke a tackle on his touchdown run and a tackle on an earlier series. Coughlin broke two tackles on one play. And then there's New Mexico State who juked Derrell Acrey and Josh Borgman one time each and that was all. 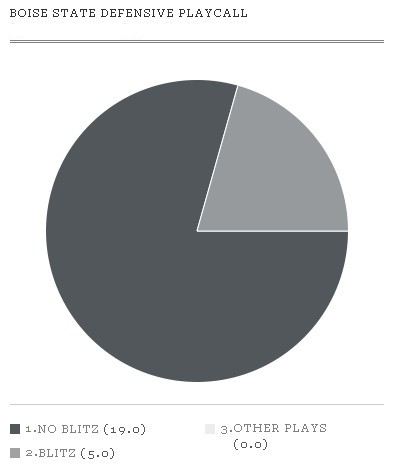 The Broncos blitzed a total of five times all night long against the Aggies - three blitzes in the first half, when the game was in doubt (relatively speaking) and two times late in the game presumably to let the backups of the backups have a little fun. 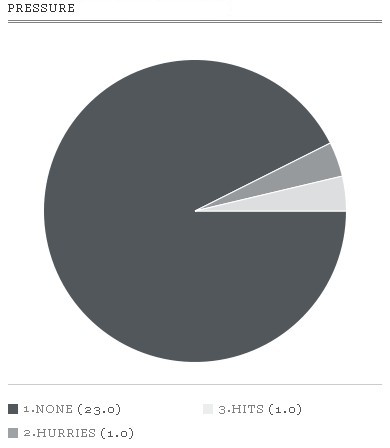 (Note: the reason for the discrepancy in total pass attempts was that the one of the pressures came on a roughing the passer penalty, which goes down in the scoresheet as NO PLAY.)