Share All sharing options for: BIFFF on Boise State versus Louisiana Tech

The Bronco passing game had it going on against LaTech's secondary. But just how good were they? Boise State missed a lot of tackles on Tuesday night. But did anyone bother counting all of them? (Yes. I did.)

Get a look at some stats you won't see anywhere else in this week's LaTech edition of BIFFF. Missed tackles, Ross Jenkins pressure, field position, and more are after the jump. Feel free to add your thoughts in the comments.

The Bronco Institute of Football Facts and Figures (BIFFF) seeks to add context and numbers to Boise State statistics. Some of it is math, much of it is game charting, and the rest is pie charts.

The five most interesting stats from Boise State versus Louisiana Tech

Yes, you read that right. 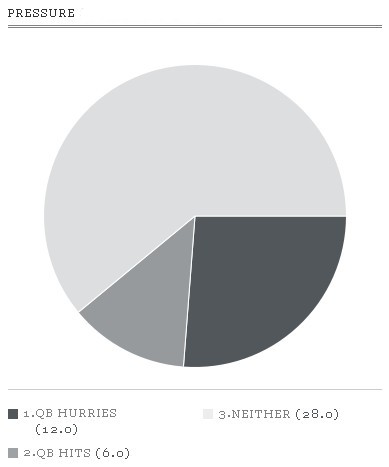 A man sitting next to me at the game lamented, around the third quarter, that Boise State had been getting zero pressure on Ross Jenkins all night. Ha! Little did he know that an OCD Bronco blogger with an obsession for Microsoft Excel was dropping eaves. You, sir, have been BIFFFed!

LaTech ran 89 plays because LaTech only gained 4.4 yards per play

The Idaho Statesman would have you believe that Louisiana Tech ran 89 plays because of their up-tempo offense, but this could not be more wrong on a basic football level. Per the Statesman:

The Bulldogs amassed 394 yards against the nation’s No. 1 defense — but they also ran 89 plays, 24 more than the Broncos, because of their up-tempo attack.

False. You do not run more plays because you snap the ball faster. That is a fundamental misunderstanding of the total plays statistic. Let me explain.

The Bulldogs ran 24 more plays than the Broncos because LaTech took forever to move down the field. Boise State averaged 7.2 yards per play and moved the ball in chunks. Louisiana Tech averaged 4.4 yards per play, ran seven fourth down plays, held the ball for the first seven minutes of the third quarter, won time of possession, had worse starting field position (and therefore farther to go), and had one more possession than the Broncos. Those are the reasons why they ran 24 more plays. 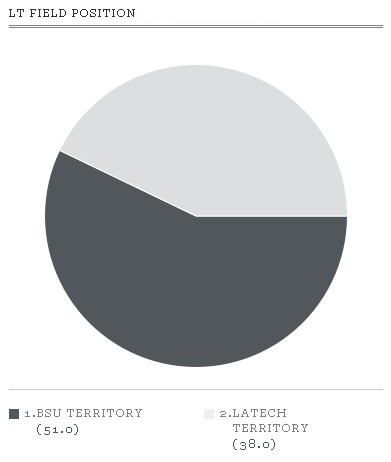 This stat is also known as Field Position Percentage, and the standards for this are 40 percent being very good and anything over 50 percent being great.

Also great? Boise State stopping the Bulldogs on three separate fourth downs inside the 20 yard line. Field Position % does not account for that. 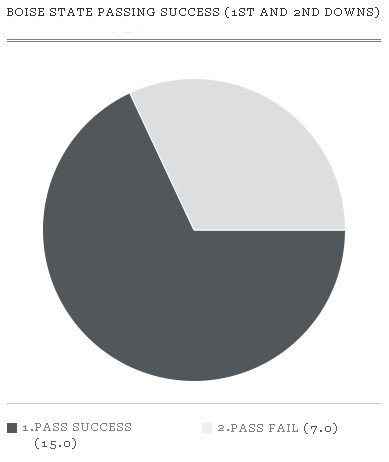 The Broncos had successful plays on 15 of 22 passes on 1st and 2nd down. That will definitely help set you up with 3rd and manageable, which the Broncos had often on Tuesday night. They weren't too shabby passing on 3rd down, either. Boise State was 3-for-6 with passing success on 3rd.