Share All sharing options for: Game balls for Boise State versus Louisiana Tech

Boise State cruised past a feisty Louisiana Tech team last night, thanks to big games from Doug Martin, Kellen Moore, and Tyler Shoemaker and some timely defensive stops. Even better, we got to see Bronco starters for almost a full four quarters. Think of all the game balls I can hand out for that.

After the jump, I pick out some of my most notable players, plays, and performances from Boise State's win, and you're encouraged to share your thoughts and reaction in the comments. 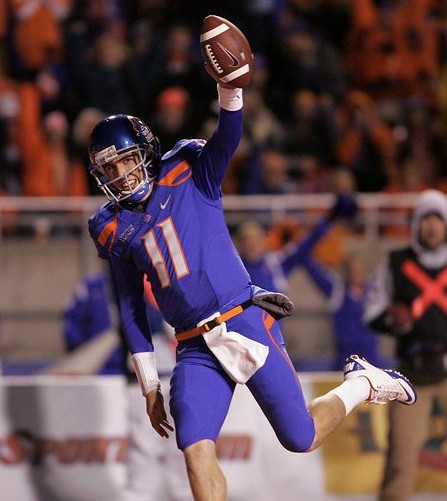 Is there anything he can't do? I mean, besides go undefeated in the SEC? Moore's two touchdown passes were right on the money, hitting Austin Pettis on a skinny post (the same play as the Virginia Tech touchdown and the touchdown Pettis scored against LaTech last season) and finding a wide open Tyler Shoemaker on a 4th down play. His touchdown catch was great, mostly because that is the type of easy ball that you typically see quarterbacks drop on blooper reels. And his punt. Oh, his punt! I may never forgive Mitch Burroughs for diving at the three yard-line to not stop that ball.

Tipped ball of the night

Baker's batted ball on Louisiana Tech's 4th down attempt might very well go down as the play of the game. Except that, oh my goodness, did you see Kellen Moore catch a touchdown?!?! OMG you guys!

Most desperate person of the night

The last time I had seen seven fourth down attempts, a first quarter onside kick, and multiple statue of liberty calls was on Madden 07 on my Gamecube. And oh yeah, the Indianapolis Colts totally never saw it coming.

I respect Dykes's approach to this football game. He knew that his team was going to have to be aggressive and get in the end zone at every opportunity, and so he called the game that way. Good for him. It didn't work, but as a Louisiana Tech fan, you can't be too upset with that.

Getting a 15-yard unsportsmanlike conduct penalty for yelling at the refs, now that's something you can be upset about.

Worst kicker of the night

Not Kellen Moore, though. He was good.

Did it ever feel at any point that Doug Martin was having a career game? Lennon Creer maybe, but not Doug Martin.

I guess that speaks to Martin's consistency in the Bronco offense. When we look back on this season, I think we may remember Martin as the driving force behind Boise State's offense. He gets the team going, and he helps extend drives with positive gain after positive gain. His carries weren't always in huge chunks like they were against San Jose State or New Mexico State, but this Louisiana Tech defense wasn't as poor as either of those teams.

The best line of the night might have been this: Doug Martin has 150 yards on 21 carries. Lennon Creer had 149 yards on 35 carries. Efficiency, my friends.

Worst theme of the night

Boise State wins by 29 points. The sky is falling!

However, there is no reason why Bronco fans and local media need to buy into it.

The Idaho Statesman's headline after the game was "Boise State's imperfect victory over La. Tech shows Broncos still have issues to address." Cynical much? That is the type of headline you would expect from a national media outlet or a Bleacher Report story, not your local paper. Boise State won, and they won big. Why throw cold water on that?

The worst part is that recapping a game in that manner sways public opinion. Fans are going to agree with the conclusions in the story because it's a game recap, and game recaps are supposed to be fact-based. And Boise State fans already have plenty of consternation in them to begin with. Bronco Nation has a lot of members who expect San Jose State-type blowouts of every WAC team on the schedule, and that's simply not practical. Beating a plucky LaTech team by four scores (and leading by five scores until late in the game) should be blowout enough.

This team cannot do right in the eyes of outsiders. It shouldn't have the same problem from its fans. Its media shouldn't feed the paranoia.

Winston Venable put it best after the game (ironically enough, quoted in the Statesman story linked above).

We can’t play perfect every time," senior nickel Winston Venable said. "I don’t think we have ever played perfect. … That’s football. You’re going to see that more often. We’ve got some good teams to play."

Rare is the perfect football game, and overcoming mistakes and disadvantages is as much a part of winning as preparation and gameplanning. Boise State did not play its best game on Tuesday night. So what? They won by 29 points, they were up by 36 for most of the fourth quarter, and they avoided the conference upset that so many other teams this season haven't been able to avoid.

Game ball for luckiest play of the night

Uhhh, let's not do that again.

Bold playcall of the night

The Bulldogs pulled an onside kick on Boise State last year, except no one was offsides in 2009. This year, the timing was solid, the kick was well-executed, and Boise State was not expecting it whatsoever. In a sense, it was unfortunate that LT didn't get the ball in that situation. And I imagine that is what Sonny Dykes was telling the referee, except in more colorful language and crossing the line between civil discussion and unsportsmanlike conduct.

Fourth down stops inside the red zone

Normally, the defense's feat is holding a team to negative yards rushing or giving Austyn Carta-Samuels PTSD. This week they tried something new: Stopping Louisiana Tech on big fourth downs.

Three times the Bulldogs took the ball inside the red zone and came away with no points, thanks to Boise State defensive stands. My favorite was the final one where Byron Hout stuffed a goalline run from the one-yard-line. 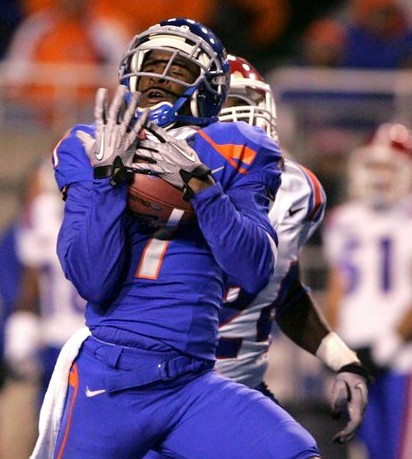 Inevitable playcall of the night

Louisiana Tech was begging Boise State to throw one deep to Young by playing single coverage on the Boise State receiver way more often than they should have been. Kellen Moore finally made them late in the fourth by lofting a beautiful pass in stride to a streaking Young. Streaking! Woohoo!

Most likely not to miss Aaron Tevis

With Tevis out with a leg injury, Percy saw his playing time increased and made the most of it by recording a game-high 14 tackles. There may be a little Wally Pipp thing happening here, although I can't be sure because I'm not 100 percent certain who Wally Pipp was.

Were you happy with the Broncos' play last night? What was your favorite Boise State defensive stand? Are you more or less impressed by LaTech after seeing them play? Share your thoughts in the comments.