The Broncos and Bulldogs square off tonight in what figures to be the toughest WAC game for the Broncos yet, which isn't saying much, because SJSU and NMSU are terrible. (Jeff Sagarin knows what I'm talking about.)

Kickoff is at 6:00 p.m. on ESPN2, and until we get there, feel free to use this post to chat about all your pregame thoughts and jitters. I vent some of my takes after the jump, including the paper tiger of LaTech's offense. Seriously, they play two good games and all of a sudden they're Air Coryell?

Gamethread will be here at 4:00. Happy gameday, Bronco fans.

LaTech's offense has been great in its past two games ... relatively speaking, I guess?

Well maybe the word on the street needs to look at the numbers again.

And now know this: Utah State just gave up 216 yards rushing to Hawaii. Idaho is the nation's 65th-ranked defense and No. 82 against the run. Let's keep this in perspective, people.

At the most, this Louisiana Tech offense is unproven. And that's not necessarily a bad thing. In fact, it's better than what they were four games into the season, which was a proven offense at being terrible. Unproven equals unpredictable, and unpredictable can be trouble. Unproven does not equal Greatest Show on Turf, however.

If anything, LT's success in the past two weeks has been due in large part to great performances in the running game. Boise State does not allow great performances in the running game. If Ross Jenkins can perform with a one-dimensional offense, then maybe we can start talking about LT being a force to be reckoned with. But until then, there's just not enough evidence to warrant anything other than a healthy curiosity.

The Idaho Press-Tribune has keys to the game

And here they are.

Although No. 1 and No. 3 seem to contradict themselves, it's not a bad list altogether. If I had to pick a most important key from that list, I would go with "forcing three-and-outs." Not only will that get the Bulldogs off the field quickly, it will give Boise State an opportunity to put the game away with a big lead sooner rather than later.

Grab your camo, it's an orange out 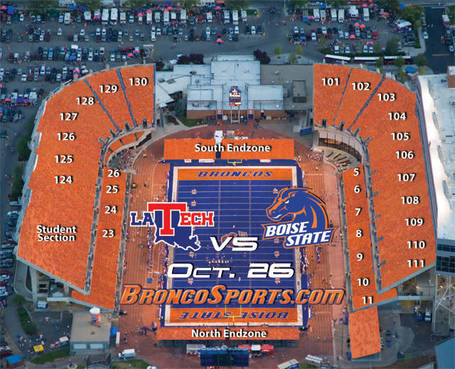 Like playing a game inside a carrot, I'd imagine. (via image.cdnl3.xosnetwork.com)

In honor of Halloween and/or hunting season.

Of course, then the question has to be asked: How much does weather impact the game? Debate!

These records had better watch their back

Tom Scott slanted yesterday about Bronco records that are close to falling, including Austin Pettis being seven catches away from Boise State's all-time reception record and Kyle Brotzman being seven points back of Jason Elam for WAC's all-time leading scorer.

But the one you and I care most about is this one: With three TD passes tonight, Kellen Moore passes Ryan Diwniddie for Boise State's TD record. And he still has a season-and-a-half to go.

So is Louisiana Tech good at kick return or not?

During my compulsive reading in the buildup to tonight's game, I came across this nugget from Box Score News:

Louisiana Tech is one of the better kickoff return teams in the WAC.

Oh no! Boise State is terrible at kickoff coverage! It's the perfect storm! 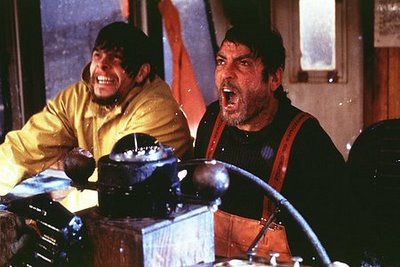 What do you make of Louisiana Tech's offense? Do you agree with the Press-Tribune's keys to the game? Remember Phillip Livas from four years ago? Anything you need to get off your chest? Share your thoughts in the comments.