The votes are in for this year's OBie awards.

After the jump, I reveal the winners in the 11 categories, as well as all write-in votes and some great reader feedback. We have two categories that came down to a single vote for the winner, a couple categories that might as well not have had any voting, and our fair share of surprise winners. 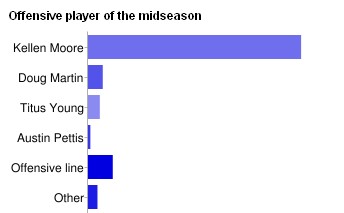 Drew's vote: Kellen Moore. To my utter amazement, he's actually improved from last year. He's got more zip on the short passes, more touch on the long passes, and runs the 2-minute drill better than anyone in the country.

Kevan's vote: Offensive line. I know it's impossible to compare the dominance of Kellen Moore and the Boise State offensive line, but there is some part of me that thinks the O-line's consistent effort this season is at least in the same stratosphere as Moore's week-in, week-out near perfection. 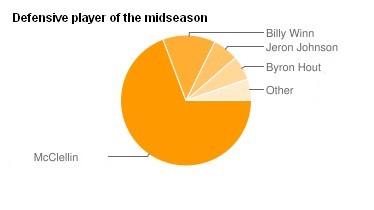 Drew's vote: Shea McClellin. I nearly gave this one to Billy Winn because he's been downright awesome as well...but McClellin fumble recovery TD, pick six (by a DE?), and general awesomeness has made the always-solid Ryan Winterswyk an afterthought.

Kevan's vote: Shea McClellin. First on OBNUG: McClellin and Ryan Winterswyk switched bodies over the offseason. Kind of like Freaky Friday except not quite as freaky since they both kind of look alike. 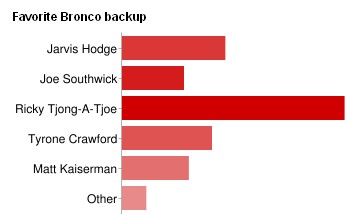 Drew's vote: Jarvis Hodge. Though Hodge has shown a propensity to really screw up my score predictions, I love watching this guy run. If he gets a head of steam...look out! Check it out.

Kevan's vote: Jarvis Hodge. He was also my favorite backup last year. He reminds me of a short-haired Michael Lose. 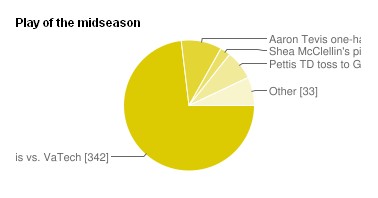 Drew's vote: Kellen Moore's game-winning TD pass against VT. This one wasn't spectacular, but it was crazy clutch and I can only assume it will be featured prominently in Kellen's Heisman highlight package.

Kevan's vote: Moore to Pettis vs. VaTech. In terms of season-defining plays, it doesn't get much better than that. In terms of flat-out awesome highlight-reel plays, well, my apologies to Aaron Tevis. 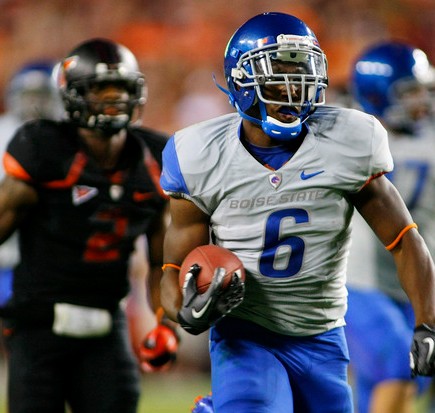 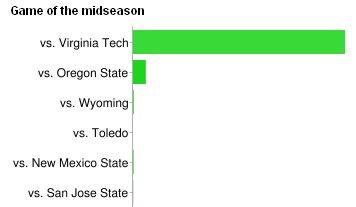 Drew's vote: Virginia Tech. What? Is this the trendy pick? This game was like a mini '07 Fiesta Bowl and a perfect way to start the season. Broncos run out to big lead...lose big lead...win game in thrilling fashion. The only thing that could've made it better would've been if Sean King would've proposed to a flag corps chick at the end.

Kevan's vote: Virginia Tech. However, if we're voting for the game where I sweated the least, it would be New Mexico State in a landslide. 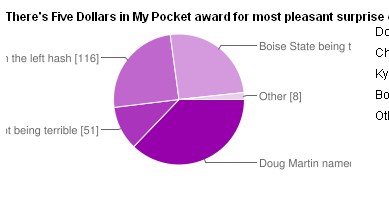 Drew's vote: Doug Martin named starting running back. Confession time. Even though I picked Martin as my starter in the off-season I really didn't think it would come to fruition. Let that be a lesson to all of you dreamers: Chris Petersen will accept bribes.

Kevan's vote: Doug Martin named starting running back. I was in the Jeremy Avery camp due to some form of Stockholm Syndrome, so yeah, Doug Martin being the starter was a pretty big deal for me.

Write-in votes: Will Lawrence (2), Defensive improvement, Jeremy Ioane and Kirby Moore redshirting, Jeremy Avery's changing roles and the way he handled it, no let-down games, Mikrino not getting kicked off any blogs 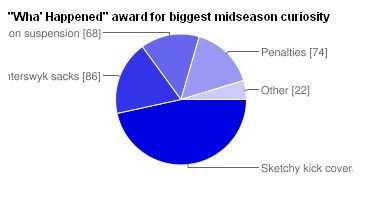 Drew's vote: Kick coverage. In lieu of using Mike LaFontaine's famous catchphrase again...I'll use one of my own to describe this year's special teams coverage..."Uh-oh Paskettios!"

Kevan's vote: Ryan Winterswyk sacks. From being the odds-on favorite to leading the team in sacks to trailing Winston Venable in sacks at the halfway point. That, my friends, is curious to me.

Best Bronco strategy of the midseason 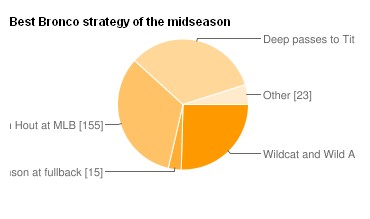 Drew's vote: Wildcat formation(s). You can almost hear Bryan Harsin's thought process: "Say, we do have 2 running QBs, a receiver that can throw and are 18-deep at running back...ah, what the hell, let's do it". You can also almost hear opposing D-coordinators wetting themselves.

Kevan's vote: Byron Hout at MLB. Who knew he could be such a great player at that position? Oh, right. Everyone he played against in high school. 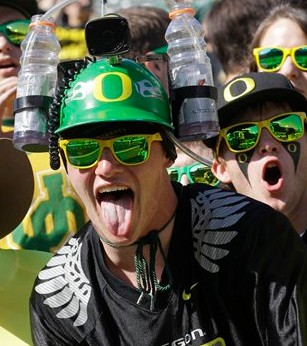 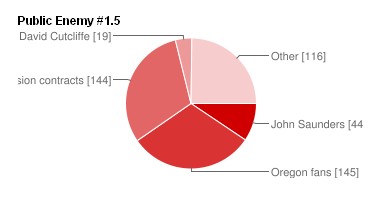 Kevan's vote: Oregon fans. I thought we were done with these guys last year. Sigh.

Meme of the midseason 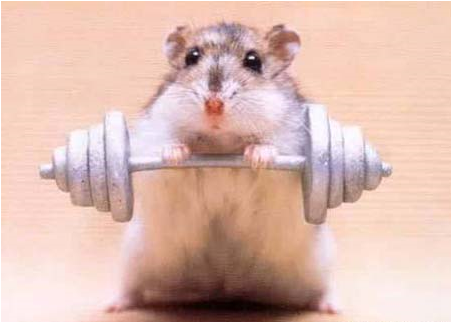 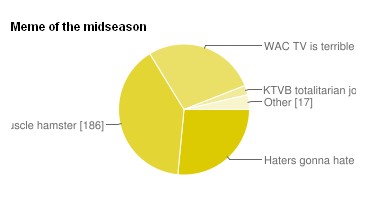 Drew's vote: Muscle Hamster. Learning that Doug dislikes the name only strengthened my resolve to keep using it. You wouldn't like Doug when he's angry-and by "you", I mean "opposing defenses". Now enjoy from a safe distance. By the way, your children are in mortal peril, Crissie!

Write-in votes: SEC schedule argument, all of the above (I hate Mikrino)

Midseason OBNUG award for excellence in the field of OBNUG 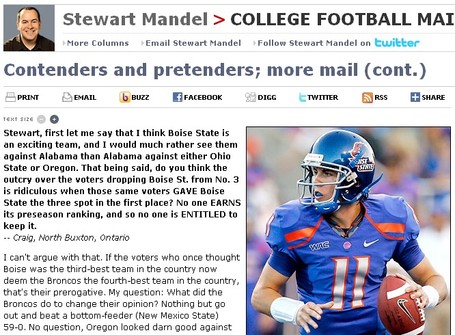 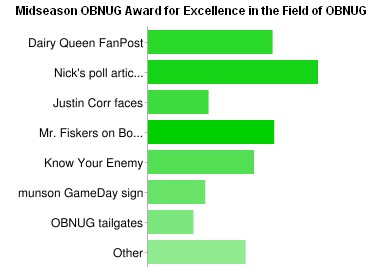 Drew's vote: As much as I'd like to stuff the ballot box for my baby, Know your Enemy...I've got to say that I was extremely impressed with the turn out and quality of our posters at the OBNUG tailgate. Salt of the earth people, you NUGgies. Give yourselves a hand. Ok, that's enough...don't overdo it.

Kevan's vote: Dairy Queen FanPost. That post was everything I have ever hoped to write. Kudos, v 2.0.

Thank you all for voting in this year's OBies. It is always a highlight of the football season, especially when you've just seen the BCS standings come out. The final question on the ballot was for any reader feedback for categories, suggestions, comments, etc. Here is that feedback.

"Best Foreshadowing" had to be the WAC conference logo was not painted on the new blue field for the first home game.  You could see its outline; but it looked as if it were just fading away.

Karl Benson is now having a sad.

Best game photo of the year: Crissie's wide angle shot of the stadium (Other nominees: the second SI cover)

Best non-game moment: Waking up for GameDay and seeing several thousand fans in line at the stadium by 5:30 AM! (Close second, OBNUGgers getting blocked by Craig James on Twitter)

Things most likely to give a coronary to the coaching staff:

E) All of the above.

A whole poll with a single mention of GameDay (only munson's sign).  Have we become this jaded?

I had my sign confiscated at the gate, so I'm probably the wrong one to ask about being jaded about Gameday.

Award for trolling other blog comments with a good helping of hearty logic: Loque

I feel at this point in time, we should probably have an OBie for advancing the cause of Bronco Nation...which I would like to nominate Pat Forde, Stewart Mandel, Trevor Matich, and Jesse Palmer for (I would, like most, cast my vote for Pat Forde...BUS!).

In fact, there's the perfect name...the Chauffeur Award...awarded to the national media personality who has driven The Bandwagon Bus the farthest...something along those lines.

Let it be written, let it be done.

I'd like to nominate Coach Kwiatkowski for the best "Your Offense isn't Going to Run Anywhere Against Our Defense" award. I imagine there was some pressure after Wilcox left and our D is still amazing (and amazingly underrated).

We are criminals for not nominating Coack K for anything.

Humanitarian award to Coach Pete for not blowing all the WAC teams out by 100?

As far as suggestions go for the site, thanks to all who sent in what they'd like to see. So far I have, variety of guest posts, fewer charts, and more pictures. As such, I am now working on a children's book with the broadcast teams of the WSN.

Call out KYBronco for not posting anymore.

Also, thanks for all the nice things you guys said about the site. It isn't a site without all of you. Well, it's a site, but it's not a very interesting one.

I cannot believe that it took me 24 years of my life to discover something as enlightening and hilarious as OBNUG! I love you guys! I cannot wait for new posts to be put up so as to laugh myself silly. Thank you all!

I'd just like to thank everyone here on OBNUG and our brave troops watching overseas for making this site the coolest hangout in Boise since the Kulture Klatsch closed. The best part of waking up (after Folger's in my cup, of course) is logging in to OBNUG to find out about the zany adventures (or misadventures...am I right?) of our WAC brethren, the mustachioed hijinks of Robb Akey, and the beautiful brutality of our own Doug Martin. It's been an honor to serve with you, Nick and Kevan (oh, this is Drew...wasn't it obvious?) and I look forward to many mo—

I love me some OBNUG, but I've been drinking, and this form would only end badly (ranting about being fired from Franklin DQ, saying too much about how I know Coach Pete has an orange grenade in his office), so I'll just say...I friggin love you guys.

I'm not sure how you guys can make OBNUG a better place. Maybe if you could rig one of the score predictions for me. That would be great. Let's make this happen. My wife will bake you some cookies.

I love talking to educated Bronco fans from all over. The site is truly addicting. According to Google Chrome I frequent OBNUG more than any other site, including Google itself. Impressive.

Hey, I'm from Brazil ! I bet you guys don't hear that a lot!

I love american football (Actually the sport is becoming really popular around here) and have been cheering for the New England Patriots the last few years. In 2008 I also started to follow College Football and jumped into the Broncos bandwagoon.

Altough I've only discovered the OBNUG Blog by the end of last year I'm already a big fan of you guys and all the work you put into the blog. I would be really glad to see this message in the Reader Feedback.

Thanks, everyone. And goodnight, OBies.