Share All sharing options for: BIFFF on Boise State versus San Jose State

We know that Boise State's offense was firing on all cylinders Saturday night. But to what degree? We saw plenty of Joe Southwick and Jerrell Gavins against the Spartans. But did we judge them with math?

Continue reading for this week's version of advanced stats and game charting, not that this game was deserving of so much attention. Still, Boise State is really good, and there are numbers to prove it. Details after the jump.

The Bronco Institute of Football Facts and Figures (BIFFF)seeks to add context and numbers to Boise State statistics. Some of it is math, much of it is game charting, and the rest is pie charts. Mmm, pie.

The five most interesting stats from Boise State versus Wyoming 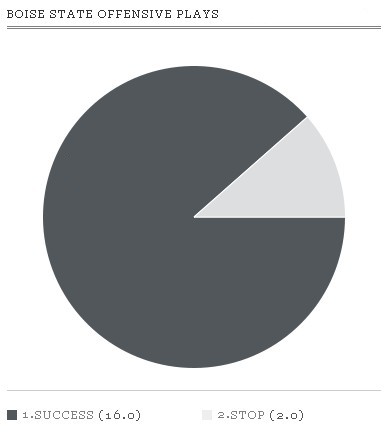 Out of Boise State's first 18 plays, 16 of them were successful

The Broncos started with six straight successes, then Kellen Moore scrambled for a short gain, then six more successes in a row, then Jeremy Avery got tackled for a loss, then four more successes one after the other.

In total, the Broncos ran 31 plays in the first half. Twenty-three of them were successes; San Jose State got stops only eight times. 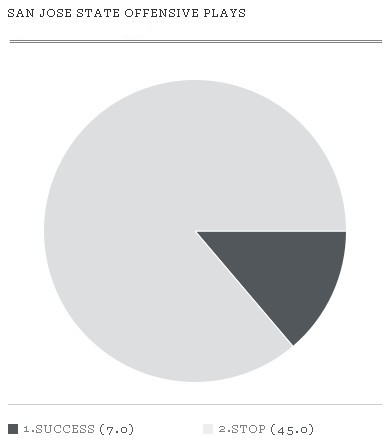 Considering Boise State had six in its first six plays, yes, this game was lopsided. 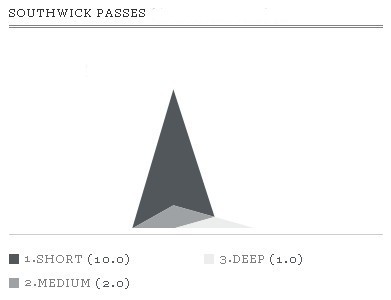 File this in the "interesting" category rather than the "predictive" category. Southwick threw the ball 13 times on Saturday, and 10 of those throws went inside of 10 yards. Typically Southwick is more of a gunslinger and risk-taker, so it may be that the situation did not call for such bold QB play as we are used to seeing. Evidence of that, four of Southwick's 10 short throws were screens.

I wouldn't say that the Spartans were going after Gavins, but he did end up having a lion's share of attention on Saturday night. Out of the seven targets, three of them were completed for 35 yards, one resulted in a pass interference penalty (and a sketch one at that), Gavins broke up another, and the rest fell incomplete (including one drop).

What can we take from this? Probably nothing because San Jose State is terrible, but it was notable nonetheless. 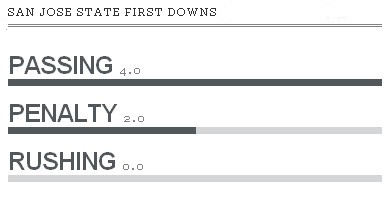 The stats have them down for six 1st downs, but considering two of them were by penalty (Gavins and Brandyn Thompson interference calls), SJSU really only gained four by themselves.

Half of the first downs came on the second quarter drive that resulted in a blocked field goal. The other two were a 3rd and 12 pick-up late in the second quarter and a quick 1st down to start a drive in the third quarter. They were all through the air because, remember, the Spartans do not run the ball well (interestingly enough, they did have a 3rd and 1 and got stuffed on a running play).

Did this game remind you at all of the Wyoming blowout? What did you make of Joe Southwick's QB play? Happy with how Gavins did in place of Taylor? Share your thoughts in the comments.