BIFFF on Boise State versus Toledo

Share All sharing options for: BIFFF on Boise State versus Toledo

Kellen Moore was his usual prolific self on Saturday. But how prolific might he have been? The Boise State defense gave up more yards than usual. So what's up with that?

These are questions that BIFFF can help answer thanks to gamecharting, formulas, and some good old fashioned football analysis. Continue reading for the advanced stats and interesting tidbits from Boise State's win over Toledo, and let me know in the comments if the stats match your impressions.

The five most interesting stats from Boise State versus Toledo

The Broncos were at their tackling worst on Saturday night, whiffing 17 times on Toledo ball carriers. That was by far the highest total of the season and the only time so far that the team has even been in double digits. 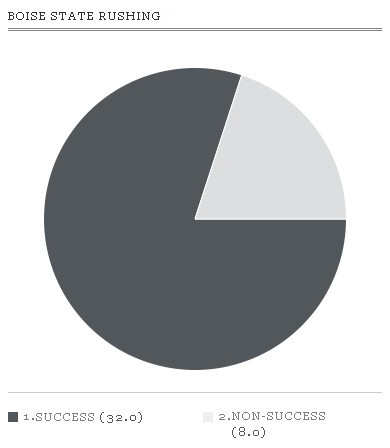 Boise State was successful on four out of five rushing attempts

Out of Boise State's 40 rushing attempts Saturday night, 32 times the Broncos had successful plays. Jeremy Avery went 5-for-7, and Doug Martin was 7-for-8 (he would have been 8-for-8 had he gained a single extra yard on his four-yard 1st and 10 carry). 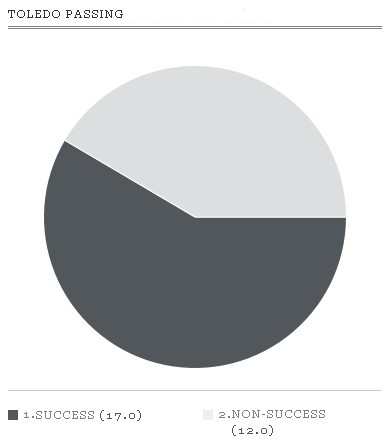 Toledo passed with more success than usual against Boise State

Again using the metric of successful plays, the Rockets were 17-for-29 on dropbacks Saturday night, converting successful plays nearly 60 percent of the time. A big part of that was WR Eric Page whose 11 receptions were successful nine times, including five straight to open the game. 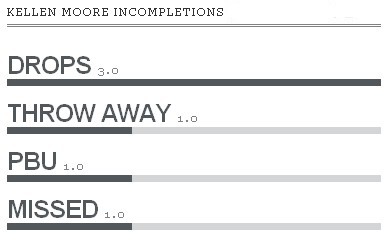 Kellen Moore was even more on the money than we thought

Moore threw incomplete six times on Saturday night, and here they all are:

To recap: three drops, a PBU, a throw away, and one miss. Give this man his Heisman already!

The Rockets must have thought that pressuring Kellen Moore was the easiest way to ensure that a 90-yard drive in 70 seconds didn't happen. Not so much, huh. Toledo blitzed on four out of Moore's five completions, and before you knew it, Boise State was at the five yard-line, knocking on the door.

What are your thoughts on Boise State's stats against Toledo? Did it feel like the Rockets were having success through the air? Do you think Pettis deserves credit for his two drops? Share your thoughts in the comments.