Share All sharing options for: Game balls for Boise State versus Toledo

Boise State cruised to a 57-14 win over Toledo on Saturday night, which makes handing out game balls so hard. Everyone deserves one. Except the ref who made that holding call on Boise State's fake punt. That guy is a ruiner of lives.

As always, Moore was deserving, going 16-for-22, 267 yards, and three scores. And that's with The Man keeping him down by not playing most of the second half. Can you imagine Moore's numbers with full-time playing time? They would be like Bryant Moniz's except efficient. Also, the Heisman Trophy race would be over.

Player of the game who wasn't Kellen Moore

Looking for a sentimental storyline from the game? Why, Jeremy Avery and his three touchdowns of course. Determination, perseverance, teamwork, and not being horribly bitter about rushing for 1,000 yards and then being named your team's No. 3 running back. These Brian Murphy stories write themselves.

Avery's three scores on seven carries were a great feat for a player who deserves every good thing he gets because of his unselfish play this season. Also, he is really good in space. On his first touchdown run, a Toledo defender was in perfect position to make a play on Avery at the line of scrimmage except for Avery being the quickest man on the field and easily beating him to the corner and the end zone.

Dominant defensive player of the night

Winn finished the game with two sacks, a forced fumble, and what was either a concussion or a convenient excuse to stalk the sidelines showing everyone his mohawk. Can we call this the Billy Winn hat trick: sack, fumble, sideline haircut glamor shot?

Austin Pettis catch of the night

Not only was the ball deflected making it that much harder to catch (right, butterfingered Toledo defenders?), but Pettis was also getting his helmet ripped off his head by the Toledo corner, who apparently mistook the ball for whatever bright shiny object was easiest to grab.

Runner up for best catch of the night: Titus Young's TD grab on an underthrown deep ball.

Tim Beckman's night in a nutshell 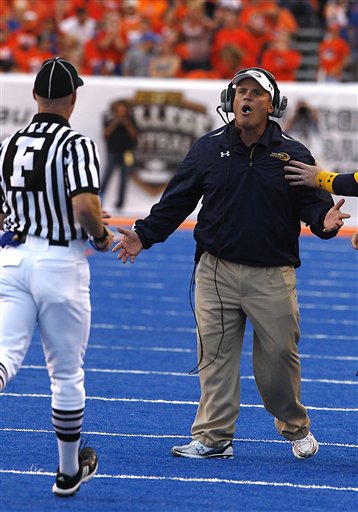 Gameball for excellence in play calling

Jeremy Avery reverse out of quasi-wildcat

Avery's second touchdown of the night came in a formation you may have recognized from last season: Chris Potter at quarterback, Avery and Martin and Kaiserman at various points in the formation, me freaking out at home because I love this formation so much. And just like last year, the reverse to Avery went for six as Toledo had no idea what hit them.

Check out the replay on YouTube via ESPN's non-embeddable highlight vids (0:06 mark).

To his credit, the pass was complete. Not to his credit, Efaw had a good 10 yards on the closest defender and ended up catching the ball with a defender draped all over him.

Potter's pass was also the recipient of Hardest QB Hit of the Night, so I should cut him some slack.

Most fitting play for Toledo's night

Field goal miss off the upright

Also, any of the their five turnovers would have been a fitting play.

The Toledo receiver had 11 receptions for 120 yards, and no, Coach Pete doesn't know how that happened.

It’s just frustrating when you know it and think you’ve got some things dialed up to stop him and you can’t. It’s just a credit to him and the plan that they had.

Toledo's plan: Get Eric Page the ball 11 times and lose by 43 points.

Game ball for not being as bad as Dick Tomey

Or maybe it was just a different kind of bad? Either way, I'll take Glenn's over-exuberance and made up words over Tomey's old man rambling any day.

How 'bout next week? I hear we have Glenn and Co. again for the call of SJSU versus Boise State.

Who gets your game balls for Saturday night's win? What was your favorite Bronco play call? Did you like this WAC TV pairing better than last week's? Share your thoughts in the comments.