Boise State finishes No. 4 in both final polls thanks to a flood of Texas support

Share All sharing options for: Boise State finishes No. 4 in both final polls thanks to a flood of Texas support

Despite a 14-0 season, the Broncos found themselves at No. 4 in the final AP and Coaches' polls released today, behind national champion Alabama, title game loser Texas, and Tebow-led Florida. Did voters get it right?

After the jump, take a look at the final totals from both polls, see how AP voters cast their ballots, and discuss whether or not Texas deserved to stay at No. 2 after last night's game.

First off, thanks to Mikrino and mountngrown for posting FanShots about the final rankings. I owe you each 100 Loque bucks, which can be exchanged for Haberman nickels if you want.

(Note: Ignore the BCS rankings; they are not updated.)

Was Alabama-Texas really that good of a ballgame?

I'll be honest. I did not watch the whole thing. From what I saw, there were several big plays and shifts in momentum, but there were also inconceivably awful fake punts, bad special teams decisions, final-minute shovel pass interceptions, and long stretches without offense. Is this what the Gene Wojciechowski media types love to see?

When I heard that Boise State finished fourth behind Alabama, Texas, and Florida, I assumed that the order was 1) Alabama, 2) Florida, and 3) Texas. My theory was that voters kept Texas ahead of the Broncos because they could not justifiably drop the Longhorns when Colt McCoy played so sparingly in the title game.

Nope, the voters gave Texas credit for a somewhat close loss to the Crimson Tide. Too much credit? You tell me. After seeing Texas in the national championship game, were you impressed?

How the AP voters cast their ballots

Thanks to Mikrino for hunting PollStalker to find the Boise State voter breakdown. Here is a peek at who voted the Broncos where. Scroll down to the bottom of the list for the inevitable Craig James swing-and-miss.

(Note: I bolded some noteworthy votes.)

James was far and away the most anti-Boise AP voter of the bunch. Voting Boise State at No. 7 is inexcusable. Voting TCU at No. 14 is just as bad. Here is James' Top Ten: 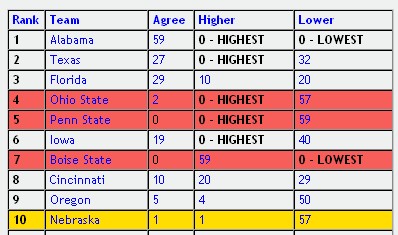 The worst part is that the Broncos only finished four points behind Florida in the AP poll. Hmm, where might you find four extra points? If Craig James had voted like a rational human being, the Broncos could have at least got three more points (if James put them at No. 4).

And then there's Austin, Texas, sportwriter Kirk Bohls, the only other man in American to put Boise State below No. 4 in the country. He dropped the Broncos below ... wait for it ... THE Ohio State University. We'll laugh about this later. I swear we will. Bohls and James were the only ones with OSU in front of BSU. Had Bohls swapped the Broncos and the Buckeyes, Boise State would have picked up an extra AP point and been tied with Florida for No. 3.

Now why is Texas still 30 points ahead of both of Florida and Boise State?

Time heals all wounds, perhaps even the recurring shin-kick that college football keeps giving us

Several months from now, when Bronco fans are focused on the 2010 Season of Destiny, these final rankings will be an afterthought. In the grand scheme of things, the final poll really only makes an impact on Boise State's record books and Wikipedia entries. Final rankings are nice for posterity's sake, but they don't do a whole lot for you unless you end up at the top of them.

In that case, despite the disappointing final result, Bronco fans should really be celebrating such a high ranking. It is the highest finish for the football team in school history. It matches the team's highest ranking ever (Boise State was No. 4 in the BCS this season). It is roughly 70 spots higher than the next WAC team. There is a lot to be thankful for. It just might take some time to see things that way.

Does the final vote say anything about voter perception of the Broncos? Is it predictive of next year's preseason poll?

Some people (including myself to some degree) thought that the final polls might give some insight into how voters will handle Boise State next season. The thought was that if pollsters put Boise State at No. 2, they respect the Broncos enough to keep them with college football's elite next preseason. If the Broncos finished worse than No. 3, the thought was that there still exists a barrier between the Broncos and the equality that they seek.

Well, Boise State finished No. 4, so we may have our answer.

Voters are not completely sold on Boise State yet, for whatever reason. Some of it may be that there are some other very good football teams this season, but another part of it is that voters still hold certain biases against certain teams, schedules, and conferences.

Does Boise State's No. 4 finish change your mind on where they might start in the polls next season?

I want to hear your take on things. How do you feel about the Broncos finishing No. 4? Did Texas deserve to be above Florida and BSU in the final polls? How might the Broncos' finish impact the 2010 preseason poll? Share your thoughts in the comments. Let's discuss.