What a game. Boise State earned its second BCS win in impressive fashion with a win over TCU, thanks to some impressive plays and performances.

After the jump, find out what moments I considered to be the biggest of the 2010 Fiesta Bowl, and share your favorite moments in the comments. Which one do you think deserves No. 1? 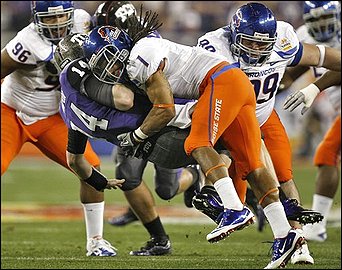 Perhaps the most symbolic play of the Fiesta Bowl was turned in by Wilson as he slammed an unsuspecting Andy Dalton to the ground on a first quarter sack. Dalton never saw Wilson coming, and I think it would be safe to say that TCU's offense never saw Boise State's defense coming, either. The sack epitomized the tough, smashmouth, physical style of play that the Bronco defense put on display all night long, and it set the tone early on that the Broncos meant business.

9. Brandyn Thompson skies for his second INT of the game

Redemption has been a popular term to describe Thompson's Fiesta Bowl heroics, and no more so than his fourth quarter pick of Dalton. The Horned Frogs had taken the ball from their own 2 yard line all the way out to midfield thanks to a couple of catches by Jimmy Young, covered by Thompson. With the game tied at 10 and TCU looking to score, Thompson put an end to the Horned Frogs' drive by picking off Dalton's 3rd down heave to the far sideline.

8. Boise State holds in the red zone, forcing TCU to settle for three

Following Doug Martin's fumble at midfield, TCU marched to the BSU 16 in only four plays, seeming for all the world to be headed for six points. However, Boise State's defense stiffened at just the right time. Andy Dalton rushed twice for one yard, setting up a 3rd down pass that Boise State kept well short of the first down yardage. The final sequence was rather anticlimactic, all things considered, which is a testament to how well the Bronco defense played with their backs against the wall. TCU tied the ballgame with a field goal, and they would not see the red zone again.

7. TCU WR Curtis Clay scores a TD right before the half

In a Poinsettia Bowl redux, the Horned Frogs struck right before the half, slicing Boise State's lead to 10-7. Dalton took advantage of an overaggressive Thompson, and the resulting six points swung momentum in TCU's favor.

6. Kyle Brotzman pins TCU deep with a punt to the one-yard-line

When he had to have it, Brotzman launched his best punt of the game, a 55-yard runner that was downed at the one-foot-line. With a little over a minute to play and only one timeout, TCU had 99 yards and two feet to go in order to tie the game.

5. Winston Venable seals the win with a deflected INT

TCU marched from their own one-yard-line with a drive that looked as if it would end with at least a couple shots at the end zone. It was not to be. Venable ended the game with a pick off a deflection, caused by Thompson's blanket coverage of a TCU receiver. When he headed upfield with the pick, Bronco Nation breathed a sigh of relief and ecstasy.

4. Brandyn Thompson picks off Andy Dalton and takes it back for six

The biggest play of the first three quarters was Thompson's pick-six that gave Boise State a 7-0 lead. The score was huge because the Boise State offense would reach the red zone only one time all game and having an early lead gave Boise State the confidence it needed to continue playing lights out.

Following a big punt return by Jeremy Kerley, TCU took a shot at the end zone and had it ... except that Hicks dropped the pass. The TD would have tied the score and set up quite the finish. Instead, well, I'll wait until we get to No. 1.

2. Kyle Brotzman to Kyle Efaw in the most important special teams play in Boise State history

Let's see. How do I put this? Yes, yes, YEEEESSSSSSSSS! /fistpump

Coach Pete refused afterward to call it a gutsy call, but let me put it in perspective. It was 4th and 9 from the Bronco 33 yard line with the game tied at 10 and less than 10 minutes to go. If the play does not work, TCU wins. Even if you trust your players to the ends of the earth, you cannot say that call did not take guts. He could have played it safe and kicked it away. He didn't. I love this team so much right now.

1. Boise State forces a four-and-out late in the fourth quarter with TCU at the Bronco 31

I had to give the No. 1 moment to the Boise State defense. Perhaps the moment that Boise State's D stepped on the field should have been the top game-changer, but I thought this series was perhaps the Broncos' best.

TCU took over at the Bronco 31-yard-line after a Jeremy Kerley punt return. On first down, Dalton had Hicks for six, but he dropped it (see No. 3). On downs two through four, Boise State shut the Horned Frogs down. A sack, a meager completion, and a fourth down incompletion turned the ball back over to the Broncos. TCU would only have the ball one more time, and this series marked their best opportunity to tie the game. Instead, Boise State held them without a first down and provided their biggest stop of the game.

What was your favorite play of the Fiesta Bowl? Which game-changing moment would you put No. 1? Share your thoughts in the comments.