Share All sharing options for: Final pregame thoughts on Boise State versus TCU in the Fiesta Bowl

Boise State and TCU are set to square off in the biggest game of the season for each team. And I am a nervous wreck.

Join me after the jump as I air my anxieties, dissect the media's breakdowns, and talk myself into a Boise State win. And feel free to work your own issues out in the comments. Gametime is almost here. Let's vent.

(Note: Don't forget to leave your prediction in the Predict the Score contest. Winner gets free RAM food.)

Honk if you like Chuck Norris facts and Boise State websites

Spotted in an Eagle neighborhood: 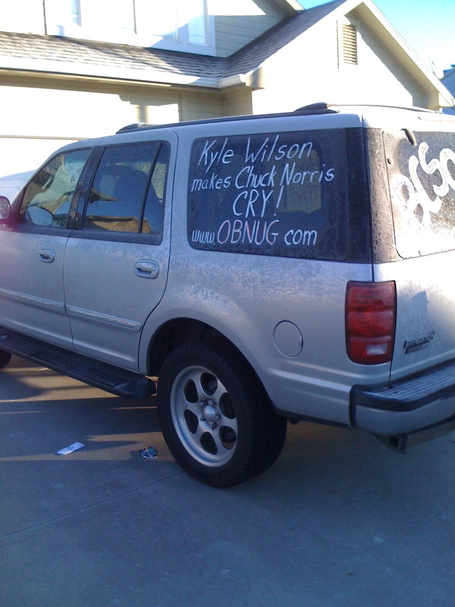 The keys to the game? Pretty much everything

The gameplans for the Fiesta Bowl do not seem to be high on brevity. Spinning around the local news sites, there is an encyclopedia of advice for the Broncos as they face off against the Horned Frogs. Which should you believe?

Let's start with the Idaho Statesman and Brian Murphy's attempt at going Ron Jaworski on this matchup. Per Murphy, here are Boise State's six ways to win:

Murphy's factors are not bad. Each is a pretty standard, straightforward tenet of good football. There is a bit more to discuss about each, however.

And it is one area where wide receiver Austin Pettis could aid the Broncos. Pettis set a Boise State record with 14 touchdowns before injuring his left ankle. All 14 were from the 20-yard line and in.

I'm not really sure why everyone thinks Pettis can be a factor in the red zone but not anywhere else on the field. Fractured ankles do not miraculously feel better when they are inside the opponents' 20-yard-line. If Pettis cannot run precise routes and create separation from defensive backs, he'll have a hard time being effective anywhere on the field, including the red zone. If people are counting on his hands making an impact near the goalline, then why couldn't his hands make an impact on 3rd and short from midfield?

It is unrealistic to expect Pettis to have an impact in the red zone but nowhere else. If he's healthy, he'll be good from anywhere. If he's not, then don't count on miraculous TD grabs just because he's made them all season. 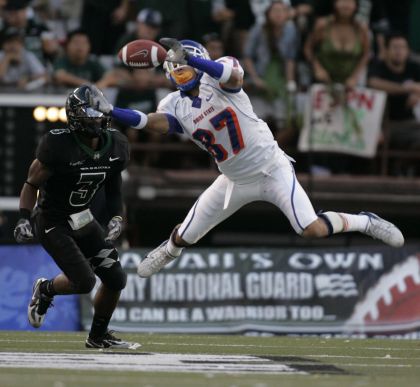 Moving along, Murphy mentions Boise State's running game as a must-have for success in the Fiesta. Agree or disagree? I am on the fence. I think the more important part of the running game factor is finding a way to create manageable 3rd down situations. Whether that comes from the running game or the passing game, I don't mind.

Boise State can win without the running game if they can find creative ways to keep their 3rd down yardage short.

Another Murphy point, helping Brenel Myers, seems like a good move, but I am not sure we will see it from the Broncos tonight. Boise State left first-time starter Michael Ames alone against Oregon's Will Tukuafu in the season opener. Nate Potter got little help on Jerry Hughes last season. Boise State trusts its offensive linemen to win one-on-one battles, and you would have to think that BSU trusts Myers to handle his duties alone, considering that there are two guys on the bench that Myers beat out, each of whom have won the one-on-one matchups this season.

And finally, Murphy warns Boise State to avoid the mistake. How about the flip side? Force mistakes from TCU? If avoiding mistakes means playing conservatively, then I want nothing of it. The Broncos have to take their shots, play aggressively, and dictate their style of play when at all possible. Plus, the Boise State defense has shown that they are more than capable of making big plays and getting turnovers when needed.

Dave Southorn of the Idaho Press-Tribune let Coach Pete describe the keys to winning. As is my sworn oath as a Bronco fan, I cannot argue with Coach Pete.

"We are probably broken records," he said. "I listened to him last year talk to him about the keys to the game. I'm chuckling, saying, 'Yeah, it is red zone, it is turnovers, it is third downs, explosive plays.'"

I will not argue with those points, but I will add another that Coach Pete often mentions: tackling. When Boise State struggles defending the run, it is almost always a result of poor tackling. There are two ways that offenses can roll up big yards on the ground: owning the line of scrimmage and missed tackles. I do not believe that TCU will be able to push around the Bronco defensive line like they did last year. Tackling? We'll have to wait and see.

Dustin Lapray's Fiesta Bowl preview attempted to ask questions that I'm not sure all that many people are asking.

Can Boise State score against this vaunted Texas Christian offense?

Who is the best of the mid-majors?

What is a mid-major?

Does that ‘mid’ need to be abolished?

Can a team like Boise State, barely playing Division I football for 15 years, really be a football powerhouse?

Which conference produced the better champion, the Mountain West or the Western Athletic Conference?

May I ask a follow-up question? Why, Dustin Lapray? Why?

I cannot tell you how often I have read analysis of tonight's Fiesta Bowl based on what has happened in the past. To be perfectly honest, I am probably guilty of doing it myself. Whether it is comparisons to last year's Poinsettia Bowl or discussions of Boise State's bowl record, hindsight reigns supreme for the Fiesta.

Boise State has committed a turnover in the last two minutes of their last five bowl games with a chance to take the lead or tie the game.

So what? Stats like these are not predictive. Just because past Bronco teams have had turnovers late in the game does not mean that tonight's Bronco team is any more likely to do so.

If you are a Bronco fan who has doubts about tonight's game based on how dominant TCU was against the Broncos last year, stop right there. Last year has very little to do with what happens tonight. The players are different. The seasons are different. The recent past might look good in newspaper columns and Bleacher Report articles, but it means nothing when the two teams take the field tonight. Don't let it get to you.

As I've gone back and forth about my feelings about this game, the one thought that I continue to land upon is this: No one can stop Boise State if they play to their potential.

In the month leading up to the bowl game, a majority of the talk has been about how great the TCU Horned Frogs are, and that talk is certainly justified. TCU is a great team. But so is Boise State. If the Broncos put together a complete game and play the way they are capable of playing, there is nothing TCU can do to beat them.

The Broncos defense will be stopping the run, according to Ryan Winterswyk.

"With TCU, they really don’t want to be a balanced attack," Winterswyk said. "They want to run the ball then they’ll throw screens and things like that. Gameplan-wise, it’s pretty simple. We have to stop the run. And then on the screens and things, we have to get out and cover some ground."

What will that look like? It could mean that Winston Venable will play more of a strict linebacker role. It could mean that BSU shifts into its 3-4 alignment that worked against Utah State and Nevada. I'm thrilled to see what they come up with.

"You just make sure you don't kick it to him (Kerley). He's elusive and he's explosive," Brotzman said. "So my job is to kick it away from him and, if he does get it, to make sure our coverage team has enough time to get down there."

Does directional kicking mean that Brotzman will be using the rollout rugby punt less?

I find this interesting. When TCU fans make their case for a Fiesta Bowl win, they point to the raw numbers, past victories, and current on-paper matchups. When Boise State fans make their case, they use much broader terms like potential, and they rely on best case scenarios to work out in the Broncos' favor. Am I off base with this observation?

I think the loss of TCU starting cornerback Rafael Priest is a bigger deal than it is being made out to be. If Priest can't go, doesn't that make the loss of Pettis a wash?

It's kind of fun for a change to have Boise State as a big underdog. There are no expectations for this team tonight, which could be the biggest factor in the entire game.

Where will you be watching? How are you feeling leading up to kickoff? Anything to vent? Feel free to share your thoughts in the comments.