Share All sharing options for: Boise State recruiting: Will DB Bryan Douglas be the next great Boise State corner?

Boise State has sent some pretty good defensive backs to the NFL in recent years with Quintin Mikell, Orlando Scandrick, and now Kyle Wilson. Is incoming recruit Bryan Douglas in line to join them?

After the jump, find out more about one of California's best cover corners and discuss why Boise State has been so successful at getting its DBs into the pros. Will Bryan Douglas be next? Let's talk about it. 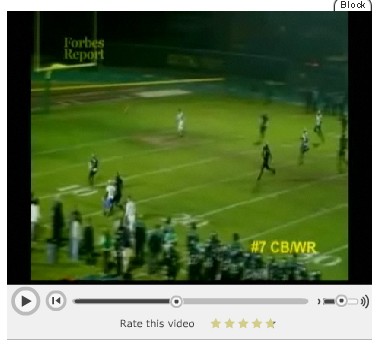 Click on the above image to visit ESPN's scouting report page and view video.

Douglas was the Deion Sanders of Nathaniel Narbonne High School, helping lead the Gauchos to the city finals in 2009. He was paired in the secondary with four-star S Sean Parker, who currently has offers from just about every BCS school worth having offers from. I can only assume teams were forced to attack the Gauchos' puberty-riddled outside linebacker in the running game.

By the end of his senior season, Douglas had earned a reputation as one of the best pure cover corners in the state of California, which is no small feat. During his senior year, he recorded 40 tackles, 11 pass breakups, and three interceptions on his way to earning all-league honors.

Not only that, but Douglas came up big when it mattered most, scoring his three INTs during the Gauchos' playoff run and putting in work as a big-time receiver.

Douglas also came up big in the semifinals, showing off his agility and precision with several over-the-shoulder catches on the sideline while getting both feet down inbounds that Coach Douglas (no relation) called "NFL-type catches."

"I told him if he keeps making catches like that, Boise State's going to have to move him to wideout," Coach Douglas said. "He just winked at me. That's the kind of player he is."

Douglas is the type of player who winks? David Augusto would have LOVED that!

Perhaps the best news on Douglas is that he made his splash on the recruiting scene while tearing up the football camp circuit last summer and standing out among a deep crop of California DBs. If he can make an impact in a talented group like that, then he will be just fine when he is ready to contribute to the Broncos.

Douglas is the fastest man in the Broncos' 2010 recruiting class, but speed is far from the only skill that he brings to the table. ESPN's scouting report has more:

Flashes good leaping and high-pointing skill in deep coverage; shows he can go up and attack the football over taller receiver prospects. Has very good hands, ball skills and a natural ability to find the football in coverage ... Undersized but a scrappy perimeter defender who is a secure openfield tackler and will set the edge on run support.

In terms of skill-set, he does not transition quickly or smoothly out of his pedal and can look a bit stiff at times in his hips and turns for a slighter corner. Lacks great explosiveness out of his pedal and strong plant and drive skill when projecting at the major college level.

Ultimately, the person who can scout him best is Douglas himself.

"I have great speed. I’m also very versatile and I read plays well. I play both sides so I have good instincts and know what’s going to happen. I’m very physical and aggressive. But I still want to bulk up. I’d like to be around 180 and be more explosive. I want to get to the ball even faster.

Funny. I said almost the same thing during a journalism interview.

Is DB Bryan Douglas destined for the pros?

Many schools over the past several years have staked their claim to certain positions, going by the nicknames Linebacker U or Quarterback U or virtually anything else (Idaho is Academically Ineligible JC Transfer U).

Are the Broncos becoming the non-BCS version of Defensive Back U?

Boise State has sent several players to the pros and among the ones not named Daryn Colledge and Ryan Clady, the best seem to all be defensive backs. Here are the notable ones:

And of course, the Broncos will add to their pro ranks this season when Kyle Wilson gets his name called, perhaps as early as the first round. It appears that the one position that provides reliable NFL prospects from Boise State is the defensive back.

(Note: Jeron Johnson is most likely the next drafted alum from the secondary. Who would be after him? George Iloka? Brandyn Thompson? Jerrell Gavins? How do you think these players project at the next level?)

Bryan Douglas seems like a natural to join his fellow Bronco DBs on Sundays. He has 4.4 speed, which could very well become 4.3 speed by the time his career is all said and done. He has ball-hawking skills and plays well in run support. He was a playmaker on offense in high school, and that typically translates into good return skills at the college level (might he be returning punts?). The only thing Douglas needs to do is add bulk to his frame and tighten up his technique.

I see Douglas being similar to Orlando Scandrick. At the NFL level, Douglas could be a very good nickelback if he progresses well during his BSU career. Then again, he could be as highly touted as Kyle Wilson when all is said and done.

Either way, I think Bronco fans will be happy.

How do you feel about adding one of California's best DBs to the Broncos' 2010 class? Do you agree that Boise State is becoming somewhat of a DB factory for the pros? How important is DB speed in the Broncos' defensive scheme? Share your thoughts in the comments.