Boise State recruiting: Will DE Tyrone Crawford be All-WAC in 2010?

Share All sharing options for: Boise State recruiting: Will DE Tyrone Crawford be All-WAC in 2010?

Generally, people land in jail when they try to smuggle 300+ lbs. (136 kilos) of dangerous substances across the Canadian border, but Bronco coaches got off scott-free after their last few trips to the Great White North—hauling dangerous linemen Andrew Woodruff and Michael Atkinson through customs (presumably in a secret compartment in the trunk of Brent Pease's Ford Taurus) with no repercussions.

Well, most Bronco fans know by now that Michael "Bacon" Atkinson was not the true object of Boise State coaches' affections when they traveled to Windsor, Ontario before the 2008 season. Their eyes were initially on Bacon's Catholic Central teammate Tyrone Crawford, who terrorized the Canuck landscape as a Defensive End, Tight End, and Running Back. Unfortunately, Crawford was not academically eligible to join the Broncos with the rest of the '08 class and the coaching staff returned to the states with a very hefty consolation prize. But now, after two years of JuCo ball, the Broncos will finally get their man. Tyrone Crawford was the first Bronco commit of the 2010 Class...and as you will read after the jump, may be their best.

Kevan's already highlighted two of the offensive gems of Boise State's '10 recruiting class...but the first, and possibly best, recruit of the bunch is someone whose name has been on the lips of Bronco fans for a few years: Mr. Tyrone Crawford. A kid with the size and skillset to thrive at the next level...I'll make my way-too-early prediction of the year and state that, barring injury, Tyrone Crawford will not only lead the team in sacks next year, but the entire WAC—because if making the move from JC ball to Division 1 football is as easy as Winston Venable made it look...Crawford should have a strong running start.

I won't say too much about Crawford's high school career, as the below video says it all. Crawford was a man amongst boys in Windsor, Ontario and the only thing more surprising than the fact that they actually play high school football in Canada is the fact that Crawford was very lightly recruited. I guess Ketchup flavored potato chips, Speed limit signs that use kilometers/hour and socialized medicine are a big turn-off for college recruiters.

The 6'4" 275 lb. Crawford ate up offensive lineman and quarterbacks from day one at Bakersfield College. As a frosh at BC, he was named  to the All-Northern National Conference team and only a month ago was named the Defensive MVP of the WSC and a JC All-American. BC coach Jeff Chudy said that Crawford and teammate Maurice Hayes were the most dominant linemen he'd coached in his nearly twenty years at the school. Crawford led the Renegades last season with 12 sacks in 10 games...far outstripping linemate Hayes who holds offers from Tennessee and Oklahoma State. 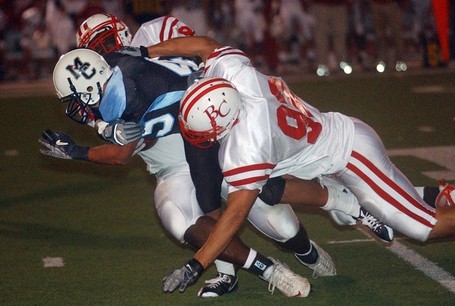 We show just one: Boise State...although Crawford's commitment to be a Bronco from the start surely scared off a bevy of recruiters. I, for one, am glad to not have to wring my hands about at least one blue-chipper getting stolen from our class this year. Crawford's heart has been with the blue since 2008.

According to recruiting juggernaut Scout.com:

Crawford at end has the size needed to play on the strong side and be an asset against the run and is quick enough to make his presence felt in the passing game. He is a high motor player that gets in on a lot of plays going away from him through sheer hustle. He plays with great pad level and leverage and rarely gets pushed backwards in the running game. Strong enough to play inside on some sets, but quick enough to stay at end.

Maybe better than Scouts technical assessment of Crawford is Bakersfield coach Jeff Chudy's assessment of his character and drive:

Chudy also added, "Does anybody ask, then answer, their own questions more than myself? No."

Considering that Crawford failed to meet the NCAA Clearinghouse standards to enroll with the Broncos in 2008, Chudy's remarks about Tyrone's focus and work ethic should be music to Bronco Nation's ears.

Will Crawford step right in, making him the Winston Venable of 2010? Is he a lock at DE or could the coaches shift him to DT?

With Billy Winn and Chase Baker returning to the interior D-line and Michael Atkinson, Darren Koontz J.P. Nisby, and Greg Grimes in the rotation, the Defensive Tackle slots should be all sewn up. Add newcomers Ricky Tjong-A-Tjoe and Justin Jungblut to the mix and you've got a log jam on the D-line that Paul Bunyan couldn't get through. This all leads to one inevitable conclusion: despite Scout.com's above remarks that Crawford's frame and strength could see him move inside...he won't. Plus...check out the hands.

Crawford is a natural pass rusher and should be able to add some incredible talent to the much thinner DE rotation. He'll join Jarrell Root, Ryan Winterswyk, Shea McLellin, and Byron Hout along with newcomer Kharyee Marshall and Nick Alexander as part of what is turning into a devastating end rush on pretty much every down. Winterswyk is obviously the Broncos go-to guy, but don't expect Crawford to be far behind. We saw last year with Winston Venable, that often the JC transfers (especially the type the Broncos go after) are more accustomed to the pace of college football than the high schoolers. I expect Crawford to be somewhere between Root and Winterswyk in camp and assert himself as a big part of a Bronco defense that should be one of the nation's best next year.

Will Crawford stay at defensive end or move to the interior? Will the coaches have him drop some weight, ala Jarrell Root 2009? Is my All-WAC prediction far too early? Share your thoughts in the comments.