Boise State recruiting: When will Grant Hedrick start at QB for the Broncos?

Share All sharing options for: Boise State recruiting: When will Grant Hedrick start at QB for the Broncos?

Boise State's QB tradition looks to be in good hands with Central HS QB Grant Hedrick. The Oregon 4A Player of the Year is strong-armed, confident, and fluid in the pocket. And he is stuck behind a group of BSU quarterbacks that are as talented and motivated as Hedrick is.

Hedrick put the wraps on one of the best QB careers in Oregon high school football, being named Oregon's 4A offensive player of the year and setting state records left and right. See if any of this sounds familiar:

OK, so I made that last one up. He shares texts with Jake Locker.

Hedrick's high school career was the stuff of legend, which is eerily similar to the career of Kellen Moore. Does this mean that we will soon be hearing about standout high school WR Girby Hedrick? One can dream.

Read into this what you will: Coach Pete invited Hedrick to graduate high school early and join the team for spring practice, something that BSU stars like George Iloka have done in the past. Hedrick declined. He wanted to stay in school and get the full high school experience, which I can only imagine is a much better experience when you're a star quarterback jock instead of the dorky kid who started his own school newspaper. Oh, if only Disney's High School Musical could have been made 10 years ago.

The most common knock on Hedrick is his size, which is a little knocking Stuart Scott's catchphrases because he has 20/180 vision. Bronco quarterbacks have heard the size criticism before, and if a couple inches and a few pounds keep potentially All-American QBs away from BCS schools and endear them to Boise, then I will gladly look the other way when it comes to size discrimination.

Size aside, here is some ESPN knowledge on what Hedrick does well and what he could improve:

He is a deceptively quick athlete with terrific feet. Works from under center and out of the shotgun and gets set quickly. He is a poised and calm in his methods, yet shows some fire to his personality and is very competitive. He is very good ball handler on drops, play-pass and bootlegs. Carries the ball comfortably at chest level, protects ball with his off hand when being rush and has been well coached on footwork and ball handling fundamentals. Release and arm strength are both good. Ball pops off his hand with very good zip to short and intermediate areas and he displays enough arm strength to stretch the ball vertically when on time. Gets nice RPM's on the ball and throws the ball with good pocket presence, timing and confidence.

While Hedrick shows flashes, he can also be risky because of his confidence. Tends to move around when he does not need to and can scramble himself into trouble. Can look very sharp as a passer in terms of accuracy, but will also spray the ball around a bit too.

Risky due to overconfidence? Why, he's Jared Zabransky! Happy feet in the pocket? Sounds like another Taylor Tharp!

Hedrick is more of a mobile threat than what Boise State has had with Moore and Tharp in recent years. He is more of a Mikey Tamburo mover, which could add an exciting element to the Boise State offense, and it could also get him in trouble if he relies too much on his legs.

The only other criticisms of Hedrick were that he might be more comfortable in the shotgun rather than under center (Boise State runs plenty of shotgun offense, so that shouldn't be an issue) and he could stand to gain a few pounds (BSU strength coach Tim Socha knows a guy at Applebee's). Hedrick has all the tools necessary to excel in the Boise State program. 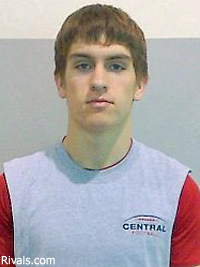 Hair by Eli Manning. (via vmedia.rivals.com)

When will Grant Hedrick contribute to the Boise State offense?

The Broncos have the nation's best quarterback under center for the next two years with Moore. They have a highly touted redshirt freshman who was being talked about with Hedrick-type reverence last year in Joe Southwick. Might the Hedrick Era be a Tharp-esque one-year run?

Here is a look at the current QB roster for the next five years:

*Tamburo missed the entire season with an ACL tear. If he gets a medical redshirt, there is a possibility he could get a sixth year of eligibility. Let's assume he does not since those situations are rare and I don't feel like researching the likelihood of it happening.

If the QB depth chart stays the way it is, Hedrick could be out of luck until the 2014 season.

But I have a theory: When Kellen Moore ends his career after 2011, Boise State could very well be in position for an open QB competition among Southwick, Tamburo, and Hedrick for the starting spot in 2012. Think about it. Southwick and Tamburo were neck-and-neck in fall practice, and Hedrick is one of the most prolific QBs in Oregon high school history. Could there be a three-man race to replace Moore?

If so, Hedrick could have a great opportunity because of his two years spent in the program, learning from Moore and others. If he wins the job, the Broncos would have him as a three-year starter, which might be preferred considering the success of players like Dinwiddie and Moore.

How do you think Hedrick's Boise State career will play out? Think he'll see the field in 2012 or will he wait until 2014? Southwick or Hedrick: Who is the better quarterback in two years?

When do you think Hedrick will see the field for the Broncos? Excited about his high school highlights? Which BSU QB do you think he most resembles? Share your thoughts in the comments.