The NUGies: Boise State's players, plays, and games of the year

Share All sharing options for: The NUGies: Boise State's players, plays, and games of the year

Who won Boise State's offensive and defensive MVPs? What play was the year's best? What game stands out the most? Did Winston Venable vote for himself in every category?

After the jump, find out who won the year's biggest awards, weigh in on Venable stuffing the ballot, and look ahead to an exciting 2010.

Note: Day One of the NUGies took place yesterday. I recommend you check it out, especially if you are a fan of Doug Harper. 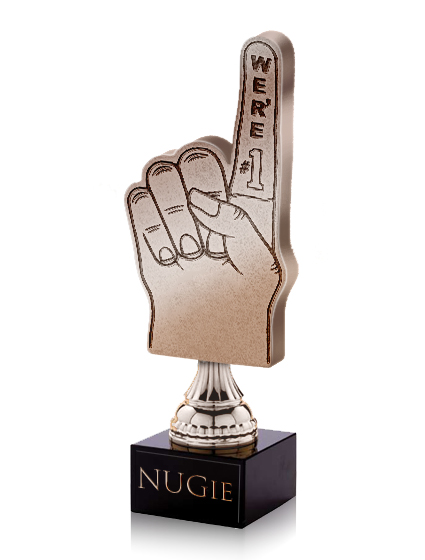 Note: I noticed an interesting trend in one of the NUGie ballots. Someone voted Winston Venable in every single category, including Offensive Lineman of the Year. Was it Venable himself? That's what I'll tell my grandkids. Wait til Jimmy Pavel gets word of this. Next year's NUGie voting is going to get ridiculous. 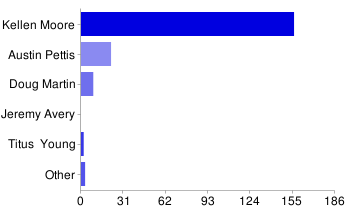 Moore's career has been filled with a lot of accolades and praise, and now there's this: He is the first two-time winner of a NUGie award, having won last year for Offensive MVP. Now if you'll excuse me, I must update his Wikipedia entry.

Notable write-in votes: Kyle Efaw. Notable because he is a tight end, and if end-of-year award ceremonies have taught me anything, it is that tight ends do not exist. 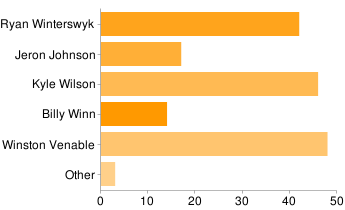 The closest NUGie voting in history, Venable edged out Kyle Wilson by two votes for Defensive MVP, marking the second time in two years that the award has been given to the defense's nickel linebacker. I think we know where one of Venable's votes came from.

Notable write-in votes: Votes were received for The Hout, Yes, and the entire defense. I would love to see Yes guy's political ballot.

Newcomer of the Year NUGie

Winston Venable sucked all the drama out of this award by being spectacular pretty much all year. Oh yeah? Well I dare him to win it next year.

Notable write-in votes: Will Lawrence received the two "Other" votes, which is pretty amazing since he has been on the team for three years. To the voter's credit, he was a newcomer to the starting offensive line.

Offensive Lineman of the Year NUGie 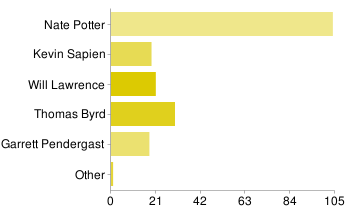 If we are being real with ourselves, we might consider this award to be on par with the team's offensive MVP since the Broncos' skill position players cannot do much without an offensive line in front of them. Then again, Kellen Moore! /hyperventilating into paper bag

Defensive Lineman of the Year NUGie

What put Winterswyk over the top? Well, a solid stretch at the end of the season certainly helped. So, too, did the movie Blind Side because there is no greater job for a child in America than protecting quarterbacks from defensive ends.

Notable write-in votes: Winston Venable, Brenel Myers, and All of the Above. So looks like Chase Baker got a vote after all.

NUGie Game of the Year

Boise State vs. TCU in the Fiesta Bowl

The Broncos' first and last games of the year were far and away everyone's favorites, and when a Yahoo! Sports report comes out later this month that I accepted bribes from the Fiesta Bowl committee to swing this NUGie in their favor, I will deny, deny, deny.

Assistant Coach of the Year NUGie 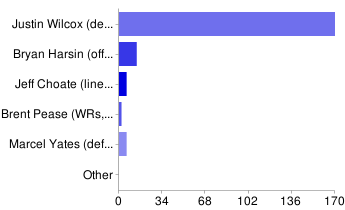 Think this vote would have gone differently three years ago?

Play of the Year NUGie 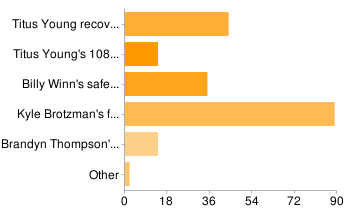 "The Riddler" has already grown in college football lore, being credited with a touchdown, sparking debate about trick plays, and reigniting a Netflix surge of Batman Forever rentals. So it's not all good. 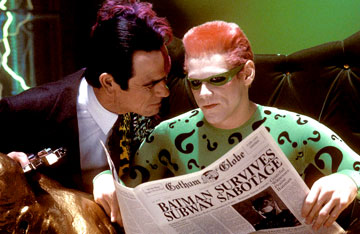 The Quizno's Sub of the Year NUGie

Not only was Martin the team's Sub of the Year, replacing an injured D.J. Harper, he may have also been the team's best running back and most consistent late-season threat. So let's not move him back to defense this spring, okay? 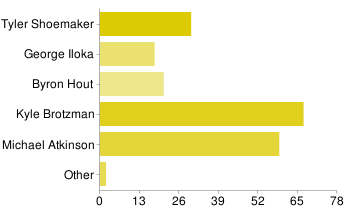 If there is one thing that the NFL playoffs have taught me, it is that kickers are never dependable no matter how well you think you know them. In that sense, I fully expect Brotzman to have a perfect season since we are now depending on him to miss all the time.

NUGie Hit of the Year 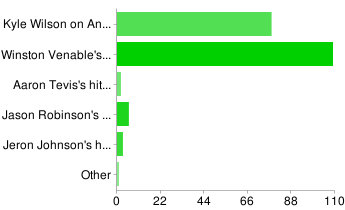 Personally, I'm excited to relive this moment so that I can hear Fresno fans complain again about how it should have been a penalty. Ah, Fresno fans. I'll give them this, there is never a dull moment. 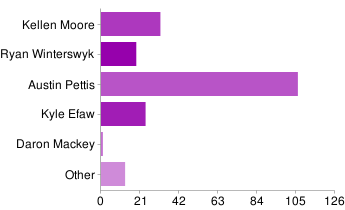 It would have been a shame for us to hold an end-of-year awards ceremony and not recognize Austin Pettis. In many ways, the Tadman award is the best one of the NUGies because of what it represents. Winning the Tadman pretty much makes you a Bronco fan favorite forever. As if the 14 TDs hadn't already done that.

I opened up the NUGies to submissions at the end for any categories, players, or moments that I missed. Here were some of the responses.

Titus Young's one handed catch on a deep route while defender is flagged for pass interference.

To catch a deep ball over your head while in full stride with one hand while a defender is holding down your other arm.  Incredible.

Thanks to Kevan, Drew and Nick for all the good times! OBNUG takes being a Boise State fan to the next level! I am looking forward to another great season, especially the tailgate parties! It seems so far away right now, but it will come fast. Go Broncos!

How about the "Titus Young Comeback Player of the Year" award?

Titus Young's explosiveness and big play ability proved to be a big difference between the 2008 and 2009 season.

Will Lawrence deserves some recognition

Happy to see the  Orange Pants are back for the Fiesta Bowl. Again next year!

Looking back and looking ahead

Thank you all for your participation in the NUGies and for a great year of Boise State football. I enjoyed myself tremendously.

Now let's get started setting unrealistic expectations for 2010! Who's with me?