The Boise State depth chart for the Miami (OH) game looks very similar to the Boise State starting lineup for the Oregon game. Hooray! Among the minor changes, J.C. Percy gets a promotion, Austin Pettis gets to hold things, and Jerrell Gavins makes the first of many appearances. View the full depth chart after the jump.

Disclaimer: Depth charts mean as much as you want them to mean. Keep in mind that things change over the course of a game week and that game situations, injuries, and performance will render some of this depth chart moot. Still, it's fun to speculate ... with hyperbole! OMG Michael Choate must be the sickest man in America!

Jason Haberman's J.C. Percy made quite the impact

As Drew pointed out in his Oregon recap, the Boise State linebacker situation is not the two-man affair that it was made out to be. Everyone gets playing time, apparently, which is great news for everyone who bought a Hunter White jersey in the offseason.

Perhaps one of the reasons for this change of mind on the Bronco coaching staff is that there are simply too many good-to-great linebackers at Boise State to make them ride the pine. This week's case study: J.C. Percy, the freshman phenom who lost out to Aaron Tevis in the fall LB derby only to see significant playing time and make significant plays versus Oregon. Percy is listed as the yin to Tevis' yang at WILL linebacker this week, co-starters as suggested by the operable OR.

What exactly did Percy do to shoot up the depth chart from backup to quasi-starter? Well, for one, he forced a very important turnover when he stripped Jeremiah Masoli of the ball at the start of the fourth quarter. Linebackers coach Jeff Choate was so happy he could've eaten J.C. Percy whole. Exhibit A: 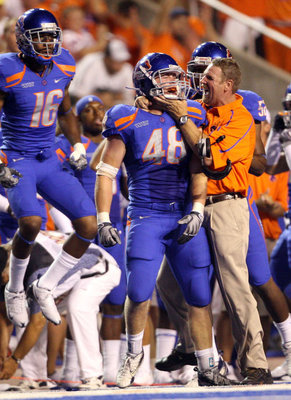 In addition to giving Choate a slight case of asphyxiation, Percy also finished second on the team with four tackles - not bad considering that Oregon was able to get out of the backfield on only ten or twelve occasions all game.

On the flip side, what exactly did Tevis do poorly to deserve a quasi-demotion? You might recall that Tevis was the one who picked off Masoli for Boise State's first forced turnover. He also had a tackle for loss. Many find Tevis to be the second-coming of Colt Brooks, but this depth chart drop marks the second time in two seasons that the OLB has failed to really hold onto that starting role.

Quick: With the game on the line and Boise State needing a defensive stop, who would you rather have in the game? Aaron Tevis or J.C. Percy? To the comments!

For those of you expecting Brotzman to be OR'ed with Jimmy Pavel on the depth chart, not so fast. It will take many more missed 28-yarders for that to happen.

Brotzman's miscues were the most noticeable part of a Jekyll-and-Hyde special teams performance for the Broncos. Someone's head had to roll. Michael Choate, the tribe has spoken.

Choate was replaced on the depth chart with Austin Pettis, which probably immediately makes you picture Pettis making all sorts of plays in the two-point conversion game. Well, you're right. That part of the Broncos' special teams is sure to get a boost, and I am slightly agog over the possibilities.

But Pettis' ascension to starting holder (now there's something to write home about) was more likely the result of Choate's failed hold on the FG Attempt of Which We Do Not Speak. Bumbling the snap, bumbling the "Fire!" call, and bumbling an attempted pass probably did Choate in. The sure hands of Austin Pettis may have been all it took to right that wrong.

In the meantime, Pettis passes to himself for two!

An offensive line for the ages

The offensive line will remain the same from the Oregon game. Excuse me while I call 2008 to gloat.

Taylor's injury has opened the door for Gavins to see some PT this week as Brandyn Thompson's backup. Gavins could very well be better than many of the cornerbacks Miami (OH) faces all MAC season. Poor QB Daniel Raudabaugh. He has no idea what he's getting himself into.

If it ain't broke, don't fix it

Boise State's depth chart remained largely in tact for the Oregon game. And for good reason. Those Bronco interns don't have time to update depth charts when they are so super busy finding marketing uses for 30,000 Ducks Do Crash on the Blue t-shirts.

The depth chart really is a testament to the quality of play the Broncos showed against the Ducks. Keep on, keeping on, Broncos. I'll find meaningless roster minutiae to obsess over one way or another.