What happens next for the Boise State Broncos now that the Ducks game is over?

Share All sharing options for: What happens next for the Boise State Broncos now that the Ducks game is over?

The Boise State - Oregon game was a lot of things: wonderful, exhilarating, memorable. But it's also over, and the Broncos have already moved on to next week. Where does that leave us fans? And what type of legacy and impact will Thursday have on the Bronco program and the rest of the season? Let's discuss.

(I will attempt to shoehorn my regular column, The Week, into this post, considering the extraordinary circumstances of the past day. Tomfoolery below.)

Boise State defense: "Who does a guy have to punch to get a little face time around here?"

In very few places, even on the precious inches of local fishwraps (we have to have our sidewalk ordinance updates!), was the Boise State defense credited ad nauseum.

Thankfully, I have a blog.

If the main thing you remember from last night's game was one of the two themes mentioned above, then you did not watch the same game I watched. Nothing - not a jayvee Jeremiah Masoli or a rock 'em, sock 'em LeGarrette Blount - was more noteworthy or significant than the effort of the Boise State defense. It was evident from the opening series to the final incompletion that the Bronco D was in charge. So some kid overreacted about trash talk after the game. So Masoli's Heisman chances are about the same as Tom Brandstater in 2007. Before all those headlines were written and opinions made, the Bronco defense did something spectacular that deserved to be plastered above the fold of every paper from Eugene to Boise. 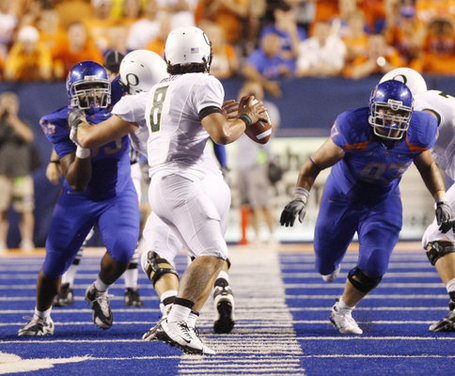 The Bronco defense shut down the high-flying Oregon attack. And shut down is probably being too kind. They dominated in a way that non-BCS teams are not supposed to dominate their bigger, badder BCS brethren, and they effected a stadium-wide (and possibly nation-wide) paradigm shift in the matter of a quarter or two. As the game began, there was a feeling that Oregon would find its offense sooner or later and that the Broncos better get as many points as they could before Oregon turned it on. An hour later, there was a palpable sense that Oregon was only going to move the ball when Boise State wanted them to move the ball. The Broncos were in charge, and you could visibly see that realization fall over the faces of Duck and Bronco fans as the three-and-outs mounted and the yardage totals stayed put.

I would love to point out individual efforts of all the Boise State defenders, but I haven't even had a chance to sit down and break out the DVR yet. I'll get to it. You have my word. But in the meantime, I'm perfectly content basking in the knowledge that, as a team, the Boise State defense showed a Top-Ten talent on Thursday night.

It was a tour de force.

It was a sight to see.

It deserves better treatment than it is getting, and I'll write as many blog posts as it takes to see that it's done.

Let's start the hype machine for Miami (Ohio)! Who's with me?

I think I'm going to miss those Oregon commenters.

They sure were a fun bunch when they weren't stumbling over themselves in a race to face palm Mikrino or setting the English language back a decade or two. I find it incredible, in hindsight, to see their universal refusal to acknowledge that Boise State's defense could slow down the Oregon offense. They all predicted that if Boise State were going to win, they would have to score at least 30 points. A lot has changed in the past 24 hours, that's for sure.

Don't expect the same fan ire for Miami (Ohio). In fact, don't expect very many fans. It could be one of the quietest weeks as far as hype is concerned, heading into Saturday's showdown with the RedHawks. But let me try ...

Really, number three on that list is all I need to get excited, but I will understand if I am the only one who thinks so. Actually, I know I'm not the only one. Coach Pete is excited about playing Miami (Ohio). I think. 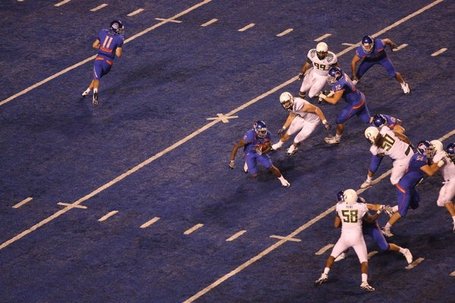 Only 12 more weeks of living with the burden of being undefeated. Pass the Pepto-Bismol cocktail

It's time for a little honesty from me: There was a point in time before the Oregon game that I wanted the Broncos to lose.

Here's my reasoning: I would rather have the Broncos lose to Oregon than to have them lose to anyone else on their schedule. If it had to happen, better to get it over with on opening night against a Pac-10 school than on a weeknight against a C-USA team that doesn't play defense. You know what I mean?

The pressure of going undefeated is already bumming me out, and it looks like we're going to be roomies for the next three months. Football experts and fans are handing Boise State a free ride to a BCS bowl. The Broncos' going undefeated is a foregone conclusion to many people. 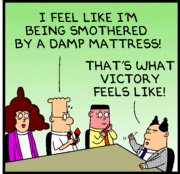 How high will the Broncos go in the polls?

I read somewhere that Boise State could shoot as high as the Top Ten after this week. Let's examine:

Is the Top Ten likely? Not really. For the Broncos to get into the Top Ten, there would have to be some seriously benevolent forces at work.

A lot of it will depend on how highly the media values Boise State's performance against the Ducks. I saw that Boise State jumps to No. 12. And I will leave this conversation before we start talking about No. 12 being their ceiling this year.

What else is there to look forward to this season?

This question obviously does not apply to me since I'm the type of guy who goes into anaphylactic shock when the fall practice schedule is released.

But for the rest of Bronco Nation, how many of the fans will stick around for 12 weeks of little-known opponents and WAC teams? What will tailgates and message boards look like a month from now?

There are some exciting games on the Broncos' schedule, including visits to Fresno State (in two weeks!) and Tulsa, but they will pale in comparison to the attention given this Oregon game. I think the team will lose a lot of fairweather fans, which makes a small part of me very happy. But the ones that stick around will be treated to a very good football teams that - believe it or not - will only be getting better as the season goes on.

That's what I'm looking forward to.

Persons of the week

I can't just give this week's Week Person to one player. The entire Boise State football team deserves credit for coming out prepared, focused, and ready for one of the biggest home games in school history.

At times, every facet of the game was clicking for the Broncos. There were great individual performances, sure. But as a team, the Broncos gave one of the most impressive efforts I have seen from them in years. The best part was that they were physical - more physical than I have ever seen them. We are watching a very different team than the past couple seasons. This team can impose itself onto others. It will be very fun to watch.

Although, nothing will ever top this.

I love me some Tom Hammond.

Also, I would love for Nevada to pull off the upset, considering that Boise State's strength of schedule is only slightly tougher than Dillon High's at this point. Come on, Kaeperlegs! Work your prepubescent magic!

"In regard to LeGarrette Blount's sucker punch to Byron Hout at the close of the Bronco Duck game, there is absolutely no defense for Blount's actions. Sure Hout needs to take a game or two off for touching that kid's pads, but Blount's reaction to Hout was just clearly out of line. There is no heat of the moment defense that should be allowed for Blount or all future Blount's. This kid needs to be exited from the football program (made an example of).

"The PAC 10 and the NCAA as a whole are the ones who will pay in the long run if they do nothing and continue to allow this type of action."