What the country is saying about Boise State vs. Oregon

Share All sharing options for: What the country is saying about Boise State vs. Oregon

As might be expected, the general reaction to Boise State's win over Oregon last night is "Did you see that punch?"

It's unfortunate for the profile of the Bronco defense. It's a bummer for Byron Hout's street cred. And it's everywhere. Here is what the biggest websites - nationally and locally - had to say about the game. 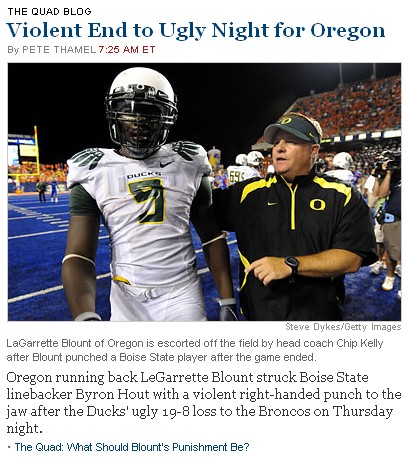 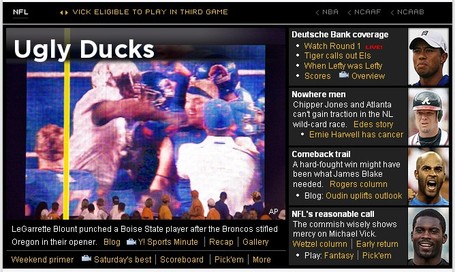 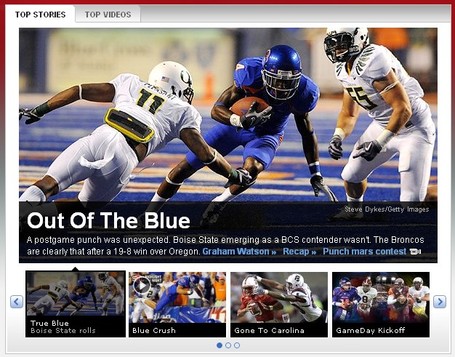 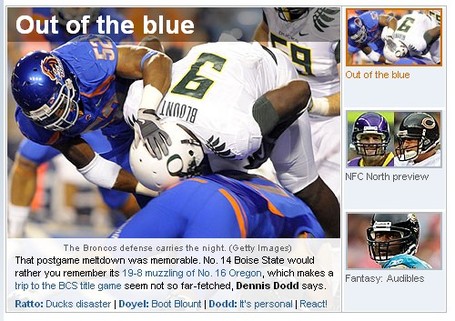 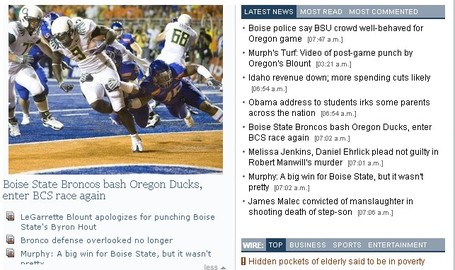 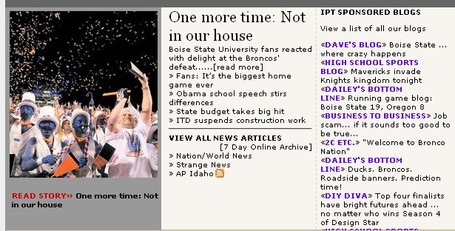 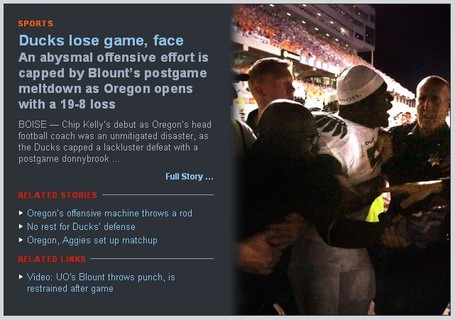 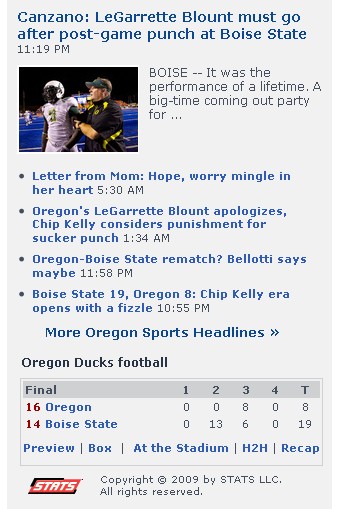 Winn and his mates made this thing look easy. They only let Oregon convert 1-of-10 third downs. I think it’s more telling that they only played 10 third downs in the whole game.
The Broncos controlled the clock and kept the ball away from Oregon, and when the Ducks did get the ball, BSU took it right back. The time of possession numbers are just sick: BSU 42:32, Oregon 17:28.

Graham Watson would like to say I told you so .... but she's probably picking against the Broncos next week.

Coach Chris Petersen said he’s interested to see how his team reacts during this week of practice and against Miami (Ohio) next week. This is a team with just four seniors, but in the past the Broncos have shown they can handle themselves with the pressure at its peak.
"I think in some ways that this whole thing will help this team because there have been so many distractions for a long time and they did a nice job of blocking those out and just playing football," Petersen said. "So I think those will be some lessons to be learned right there. We said it last week: This is such a long season and we’re going to play some good opponents. We have a hard travel schedule and the bull's-eye will continue to grow. So it’s back to work tomorrow."

First I've heard anyone really mention the Broncos' difficult travel schedule, but with trips to Bowling Green, Tulsa, LaTech, and Hawaii, they will definitely be logging a lot of miles.

it was enough against the Ducks, whose pre-game quack (and post-game punch) was certainly worse than its in-game bite. The Chip Kelly era is not off to a rousing start.
Whether that says more about the Broncos' resilience - and often overlooked defense, which played its tail off and will, once again, not get the credit it deserves given the post-game nonsense - or the Ducks' utter lack of competence offensively will be decided during the rest of the season. Oregon did not look anything like the team that scored 162 points in its final three games last year.

I am of the mind that Oregon did not look anything like last year's team because of the effort of the Boise State defense. But I don't write Statesman columns, so whatever.

Has the offense ever been that bad for Kelly at Oregon? Kelly said he had a similar feeling Thursday night as he did after the Ducks’ 16-0 loss at UCLA in 2007. But the Ducks were already without quarterback Dennis Dixon, and backup Brady Leaf went down with an injury early in that game as well, so the offensive expectations for that game didn’t even begin to match the hype that surrounded Oregon entering this season.

Dr. Saturday just made my day.

It wasn't tricky and it wasn't a fluke -- the Broncos not only looked like the sharper, better-prepared team, but were clearly the more physical team, which was not something you could have predicted coming in. In that sense, this may have been a more legitimizing win than the feel-good, trick play-laden Fiesta Bowl upset over Oklahoma three years ago.
Boise will very likely be ranked in the top 10 next week, and has never looked more like it belonged there than it did in the first two-and-a-half quarters tonight.

Top Ten by week two? Never would have thought I'd see the day.

It's funny because it's true.

"That’s a pretty explosive offense, and if somebody had said to me that we’d only give up 17 points, or somebody even said 19 points … but it wasn’t enough," UO defensive coordinator Nick Aliotti said. "It was just one of those days."

Advanced statistics from the Idaho Statesman.

The Broncos ranked third in the country in scoring defense last season, holding opponents to 12.6 points per game. After one game, this year’s unit is faring even better.

Have you found a link that you'd like to share? Stick it in the comments or put it in a FanShot. What do you think of the general mood following the game? Disappointed there isn't more focus paid to the Broncos' defensive effort?