Share All sharing options for: Final pregame thoughts on Boise State vs. Oregon

I am as anxious as all get out. 8:15 cannot come fast enough - 11:30 even moreso. I have not only  reached the point where I want the game to be over and fate to be decided, I have passed by it, driving at 100 miles per hour with my eyes closed, behind the wheel of Kyle Wilson's motor home, blaring T-Pain and singing along at the top of my lungs. Find a happy place! On a boat!

I need to get a few things off my chest. Feel free to vent for yourself in the comments.

I have been so irritable these past few days, it's not even funny. I'm cranky. I'm distant. I'm overwhelmed by the immense pressure of rooting for a team whose expectations, according to even the most cautious estimates, are perfection and immortality.

I have aged three years in three months.

Uncertainty is what really gets to me, and it has been doing so since my days of gulping Pepto-bismol before asking girls to banquets over the phone. This game ranks right up there among the worst. I was nervous last year for the Poinsettia Bowl, and look what happened. I was in agony over what the fate of the dog in Marley & Me, and we all know how that ended. If I can't have my Broncos undefeated and my fictional pets off the heart meds, then I'm a mess. 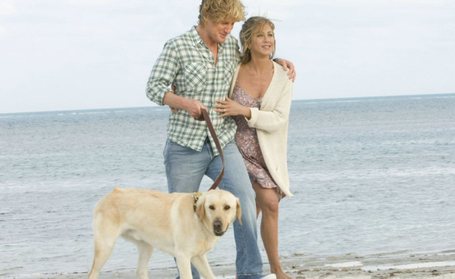 Spoiler alert: The dog licks himself. (via thecia.com.au)

What's going to happen if the Broncos lose tonight? The consensus is that they'll be staying home for bowl season at the Humanitarian. That's not the end of the world. The end of the world will have far fewer truck stop commercials. But it will put a serious damper on the rest of the Boise State football season for all those thousands of fans who consider themselves fans when things are going well. Like Brian Murphy.

I think that is where this whole ordeal finally makes sense to me. I'm struggling with this game because it has taken on a life of its own. Boise State - Oregon has jumped the shark. It has broken past mere anticipation and become a caricature of itself. It's no longer an exciting season opener. It is the BIGGEST GAME IN BRONCO HISTORY AND IF YOU DON'T BELIEVE THAT YOU'RE A LOSER. And it is making me go insane.

Tonight's game is stressful and burdensome and wearying and weighty because all the hype surrounding it is taking away from my favorite part of Boise State football: the football. 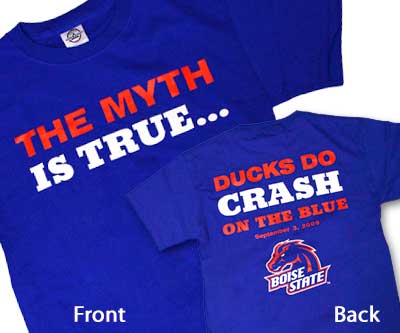 I don't enjoy that. I enjoy sitting down and watching the Broncos play football. It doesn't matter to me if they are playing against Oregon or Idaho. I don't even care if the game counts or if it is practice. Just let me see Kellen Moore throw darts from the pocket, Kyle Wilson lock down a receiver, and Ryan Winterswyk hold the edge on a sweep. Beautiful Bronco football makes me happy. I don't need all these extras.

My life as a Bronco fan doesn't hinge on the outcome of  tonight's game against the Ducks. Win or lose, the fun is just starting for me, and the sooner I can get past all this bloated hype, the better off I - and those in my immediate vicinity - will be.

Let's get to the football and get past the talking.

Well, there are 500 words I'm never going to get back.

Coach Pete had an interesting take on the most important factors in tonight's game. From the BroncoSports Twitter:

Advantage Broncos? Boise State has one of the best special teams units in the country and returns several stars off of last year's stellar group. Oregon has a true freshman punter and question marks in a lot of places. Whether it's Kyle Brotzman flipping the field in the punting game or Kyle Wilson changing the way the Ducks handle their kicks, Boise State goes into the game with the edge.

I'm not even going to touch this one. There are simply too many factors that could swing this in either direction.

Coach Pete makes a brilliant point by bringing up tackling. Like I mentioned on Monday, Boise State's defensive players will be in the right positions to make plays. Whether they make them is the real question. And the same is true of Oregon. No matter who you are or what conference you play in, if you don't make tackles, the other team is going to have success. Having the other team miss tackles is Idaho's main offensive strategy. Sure tackles will make a difference tonight. No doubt about it.

LeGarrette Blount scares me more than Jeremiah Masoli scares me

I feel pretty confident that the Broncos should be able to move the ball on the Ducks. Oregon has some green players in the secondary and on the D-line. Kellen Moore will have some open receivers. Bronco running backs, with UO players playing the pass, will have some holes.

I'm just not sure how the BSU offensive line will hold up.

My biggest area of concern is in pass protection. In the spring scrimmages, Boise State put up some gaudy passing stats, but Kellen and Co. didn't exactly have loads of free time in the pocket. Oregon has to do something to set the tone on defense. I think that will include blitzes and stunts to create pressure on Moore. I'm curious/terrified to see how the O-line handles it.

I am so glad this game is not being played in China. Kudos to Gene for only agreeing to a China game if the Ducks still agreed to play another game on The Blue.

I wish Jeron Johnson would wrap up more. I am not a fan of the big shoulder hit. If he had went to wrap up on Blount instead of lunge at him, we wouldn’t have to see the TD highlight of Blount leaping over Reveles.

Is that the best crew ESPN can send here? I would even take Mike Golic again.

RE: China, no kidding. How terrible would that have been? This game has been so good for the Boise State program locally and nationally. Exposure for a China game would have been intense, but to have so much attention focused on Boise, Idaho, has been a very good thing.

RE: Jeron Johnson, his aggressiveness fits perfectly into one of Coach Pete's keys. If Johnson can play aggressively and be a sure-tackler, he is one of the best safeties around.

RE: ESPN crew, I had no idea that Bob Davie was still alive.

I hope Coughlin is ready to step in, because you just know the Ducks will be head hunting on Kellen.

Someone had to say it, and I'm glad it's not me. If anything should happen to Kellen Moore, what will happen to the Bronco offense? Coughlin looked solid in fall scrimmages, but scrimmaging against Boise State's No. 2s is a lot different than playing against the Oregon Ducks. Coughlin has a Taylor Tharp feel to him, which could either be really good (Tharp vs. WAC teams) or really bad (Tharp vs. Washington).

TCU ran all over and only scored 17.

We all discussed whether the Broncos could win without running the ball effectively. But can the Broncos win without stopping the run effectively? Forum8 makes a good point that TCU owned the Broncos on the ground and didn't really put up big numbers on the scoreboard. I think Oregon has the home run threats to turn rushing yards into big plays and points, but it will be interesting to see how strong Boise State's bend-but-don't-break defense is this year.

Got anything to add before the game kicks off? There will be a comment thread going up later today and a postgame wrap shortly after the game ends. If you're going to the game, send me a Tweet @obnug or email me tips@obnug.com to let me know where you'll be, and I'll try to run into you. I'll be in the NEZ watching the game with my hands over my eyes if you want to join me, and I'll attempt to check in on comments and Tweets throughout the game.

And all the people said ... Go Broncos!