The 8th ranked Broncos will make their first ever trip to Bowling Green this Saturday to take on the Falcons in Doyt Perry Stadium. The Broncos are coming off a hard-fought win over Fresno State and trying to figure out what led to a "minor" defensive letdown. The Falcons are coming off a hard-fought loss to Marshall and trying to right the ship in a big way. The Broncos will be the highest ranked team to ever play at Bowling Green—leaving a pretty big carrot dangling for the Falcons. A win will keep the Broncos BCS hopes alive, a loss will have Bronco faithful crowding 10th story ledges around the Treasure Valley. Needless to say, there is a lot to be learned about this week's foe (don't worry, Kellen Moore already knows their defense intimately)...so let's all give the Falcons a closer look through the magic of factoids and childish jokes. It's time to get to know your enemy, Bronco Nation...so take notes.

10) BGSU danced its way into the Guinness Book of World Records at their 1975 Homecoming when 3,376 students joined hands to form the longest snake dance ever. I'm sure you're as disappointed as I to learn that the Snake Dance did not entail dancing with live cobras in ones' teeth. 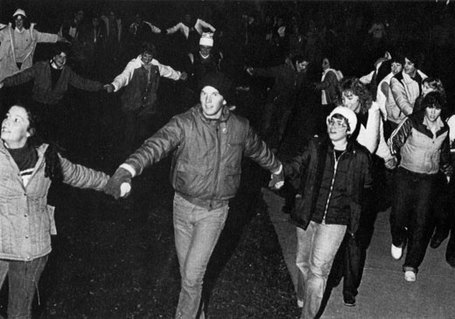 "Snake Dance" conjurs up much cooler images than this. This looks like that
"I'd like to buy the world a Coke" commercial.

9) Actor Tim Conway attended Bowling Green and majored in speech and radio. Conway is best remembered for his stint on "the Carol Burnett Show", his buddy capers with Don Knotts and his diminutive "Dorf" character. Conway is currently suing David Augusto for infringing on his "Dorf on Golf" copyright after viewing Augusto's 2004 coverage of the Albertson's Boise Open.

8) Bowling Green's first student newspaper was printed in 1920. The publication came out monthly and was known as the Bee Gee News. Current editions of the Bee Gee News seem to feature Barry Gibb prominently, though I'm not sure why.

7) Bowling Green won its first ever football championship in 1921 when coach Earl Krieger led his squad to a 3-1-1 record and the Northwestern Ohio Intercollegiate Athletic Association Championship. Bowling Green outscored their opponents 178-34 that year, although it should be noted that 151 of their points came against Findlay (OH). BG's Cumberland-esque beatdown of Findlay remains one of history's great mysteries as the team was only averaging 6 1/2 points per game up until Findlay rolled into town. From what I can tell, Findlay was not a school for the blind and deaf, nor was it a school for the victims of farming accidents—my hypothesis is that the team was decimated by Spanish influenza and had to bring in replacements...specifically, 4 circus midgets on the defensive line and a bag of sawdust at center.

5) Bowling Green is tied to one of the greatest tragedies in college sports history. In 1960, 16 members of the Cal Poly football team were killed in a deadly crash at the Toledo Airport after playing BGSU. The following year, Fresno State and Bowling Green met in the first "Mercy Bowl" in Los Angeles to raise money for the Cal Poly Memorial Fund and aid crash survivors and their families. The bowl was held only once more, in 1971. Fresno State appeared in the bowl on both occasions.

2) SICSIC is a secret Bowling Green pep squad that was founded in 1946 by then-president Frank Prout. Prout selected the first members of SICSIC from Bowling Green's yearbook staff and formed the group during a confidential midnight meeting. SICSIC is comprised of six undergraduates that wear masks, jumpsuits, and gloves, communicate through placards, and hand out candy at games. The 2 Senior members of SICSIC are "unmasked" annually in front of the student body in January or February. Make no mistake, this whole thing is exactly as creepy as it sounds.

Send in the clowns.

1) Bowling Green's official mascot is Freddie the Falcon. The school, which was established in 1919 and originally known as Bowling Green Normal School, didn't get the Falcons nickname until 1927 when an intrepid editor from the Daily Sentinel-Tribune thought it a fitting mascot. Prior to being called the Falcons, Bowling Green's squads were known as the "B.G. Normals", "the Teachers", or, my personal favorite, the "Pedagogues". Nothing strikes fear into the hearts of men (besides the Shadow) like a dull, formal, and pedantic teacher.

Now you know, Bronco fans...and knowing is half the battle (3/4 tops)