Share All sharing options for: FalconBlog Q&A on Boise State vs. Bowling Green

If non-BCS teams were judged on the quality of their fansites, Bowling Green would be a shot in the arm for Boise State's strength of schedule. FalconBlog has a little bit of everything: news, analysis, local media teardowns. It is SEC quality, with MAC material.

FalconBlog will be engaging with OBNUG in the sissy-armed arm wrestling match known as rival blog bet once again this season. Winning team's blog gets a free post on the losing team's blog. That is, unless Boise State loses, in which case I'm shutting my blog down.

In the meantime, journey beyond the jump for a Q&A with FalconBlog, complete with a recipe for a BG upset ... written with a straight face? It's hard to tell.

What went wrong for BGSU last week against Marshall?

Well, I think the primary thing we need to do is stop playing teams with giant M's on their helmets. It is not working out. If you are going to go down there and expose yourself to those people, you'd like to at least get a victory out of it.

Beyond the "M on the helmet" theory, the Marshall game was a pretty big disappointment for our team. That was a winnable game, and we didn't deliver it. BG failed to capitalize on some red zone opportunities in the first half, and then had a three-play meltdown (missed FG, 80-yard TD run for Marshall and then a Sheehan fumble) that really turned the game. BG was unable to establish the run due to a shortage of TEs and unable to stop the run, especially in the second half.

What went right for BGSU the week before against Missouri?

BG played a nice game in Columbia. BG moved the ball effectively, some running but mostly passing, and so long as Missouri was trying to throw the ball, the Falcons were laying down some pretty good defensive back play too.

Once Missouri decided to run the ball down our throat, that's what they did, and BG was more or less powerless to stop them. This was a game BG could easily have won, but in the end, BG didn't jack up the lead when they had the chance and Missouri was able to take advantage of size advantages and win the game.

Well, there has been a dramatic decrease in temper tantrums blaming the fans for fourth quarter collapses, a recognition that no rule prevents you from throwing the ball to a receiver past the line of scrimmage, and player arrests are dramatically down. So, we have that going for us. Which is nice.

I don't think you will find any Bowling Green fans who are sorry that Coach Clawson is here. Well, maybe a couple of message board cranks, but I think most fans are satisfied with the change. Coach Clawson is a proven winner and we hope that he can get the team to finish victories in ways that Coach Brandon did not seem to. He is a more positive presence.

How has the suspension of starting safety P.J. Mahone impacted the defense? What is the strongest and weakest part of that unit after three games?

Well, losing Mahone hurt. BG only brought back three starters from last year's defense and he was one of them. He is also an all-MAC defender in past seasons. So, we have even less seasoning on the defense then we did before that.

The linebackers have been a pleasant surprise and have been playing well, as have the corners, which was a major source of concern coming into the season.

The place where our defense is struggling is right on the front line. They played well against Troy, but were not getting off their blocks or getting QB pressure in the next two games. The line has been hit both by graduation and by decimation of some recruiting classes from players being dismissed from the program. Currently, our strategy is to do a lot of rotation and keep fresh players in.

What elements of the Dave Clawson offense are toughest to defend? How does he prefer to attack teams and what personnel fits best with his system?

One of the refreshing things about Coach Clawson is that he is not a "system guy." Rather than coming in and trying to run an offense the players were not recruited to run, he has installed a hybrid of the offense he would eventually like to see.

Presumably, he will gradually transition the offense as the personnel evolves. So, we are still using a lot of spread sets. His philosophy is to get the ball to playmakers in space, and to take what the defense gives us. He considers shovel passes and screen passes an extension of the run game. He is far more committed to running the ball than Brandon was, though that has yet to bear fruit. He would like to have more tight ends and fullbacks than he has (more or less we didn't use any under the former offense). You will see us try to go downfield more often than we did in the past. 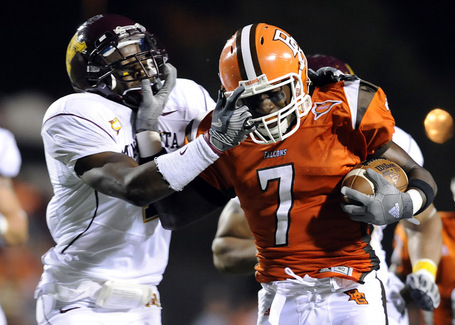 Describe what makes Freddie Barnes such a dangerous player.

Freddie Barnes is an interesting player. What makes him a dangerous player is that he seems to be able to get open even though everyone knows he is going to get the ball. I'm candidly not sure how. He was a HS QB, and actually started a game against Wisconsin for BG at QB. He was moved to receiver and has a productive sophomore season before struggling with injuries last year. He has a unique skill set. He has good speed and hands, but is built like a running back and can make people miss. He does not have blazing speed, but is a strong runner who can also run out of the shotgun on a direct snap. He works on every play and he and Sheehan have excellent chemistry.

What has been an unexpected bright spot on the team so far?

Well, if it isn't Coach Clawson's sweater vests, I don't know what it is. Ok, it has to be the linebackers. We graduated two pretty good LBs last year, and it was a big concern in the off-season. Jerett Sanderson, the holdover, has continued to play well, and Cody Basler and James Schneider have really performed well in that role.

What must Bowling Green do on Saturday to win against Boise State?

Well, a little hint here. Don't drink the water in your locker room, OK? You know, I'm just saying. Obviously, everyone at BG has great respect for the Boise program. In fact, in his presser on Wednesday, Coach Clawson said that Boise is the model for where BG wants to take its program. To win, BG needs to control the line of scrimmage in a way we have not done in two weeks, and keep Boise from making big plays. We are anticipating a sell out on Saturday and Boise is the highest ranked team ever to play in our Stadium.

If we can keep the crowd in the game, and be physical on the line of scrimmage and keep the offense on the field, we can win. We have won improbable games before.

I can't help but notice that Boise State is only at No. 14 in your CBS BlogPoll. As a fair and balanced Boise State fan, I have to ask: What is up with that?

Uh, yeah. About that. Boise will end up in the Top Ten if they go undefeated, but Oregon does not appear to be as good as advertised, Miami of Ohio is awful and Fresno was a nice win but a close game.

Lightning round. I say a word, you say the first word that comes to mind.

For all things Bowling Green, check out FalconBlog. You won't be disappointed - unless you're Gregg Brandon.