Where does D.J. Harper's injury leave the Broncos?

Share All sharing options for: Where does D.J. Harper's injury leave the Broncos?

Godspeed, D.J. Harper. Bronco Nation wishes you nothing but the best. We'll see you next season.

Harper's injury is a blow to the offense and an obstacle to the rest of the Broncos' season. He was having a stellar season, and he'll be missed in a lot of ways. Join me after the jump for a look at what the Broncos do now and what they'll be faced with in the future. 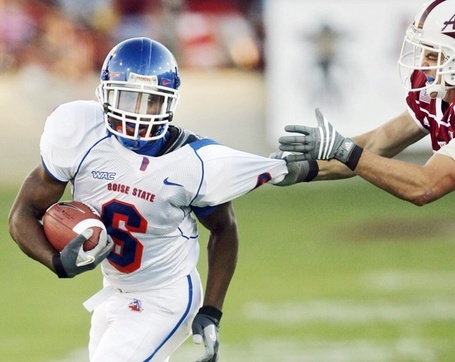 On Harper's 12th carry of the night at the start of the fourth quarter, he took a handoff from inside the Fresno 10-yard line and got stuffed behind the line of scrimmage by Fresno LB Kyle Knox for a two-yard loss. Live, the play looked simply to be a hard hit from a blitzing linebacker. If he had injured anything, it made sense to think it was a shoulder or an ego.

But when Harper was hit, his left leg was planted in the ground and his body was perpendicular to the line of scrimmage. The momentum from Knox carried him through Harper, bending the Bronco running back sideways, and torquing his left knee at a weird angle. If the leg hadn't been planted (as mentioned by reader Drofdarb), he might be okay, and I might be able to turn my guest bedroom from a vigil back into a bedroom.

Anyone see the hit and think ACL right away? I sensed it was more serious than oblivious Joe Tessitore and Rod Gilmore made it out to be, especially when trainers were massaging Harper's knee like it was a fabrege egg.

Bonus points to anyone who can answer this question: What Bronco players have suffered ACL injuries before?

What it means for Harper

Coach Pete is confident that Harper will be able to redshirt. If Yonus Davis can play seven years for San Jose State due to an ankle sprain, then Harper's medical redshirt should be a foregone conclusion. The NCAA requires the following:

In order to be eligible for a medical hardship waiver, a student-athlete must have competed in at least one contest in the first half of the season, but no more than three contests or 30%, whichever is greater.

Readers PeaDiddy and BSUDrew were already all over this. Citizen journalism at its finest. Harper meets these requirements easily.

The bigger question for Harper is how he will bounce back from the injury.

Knee injuries are serious, and there's no guarantee that Harper is going to be the back that we saw this season. Some experts estimate that it takes two years for a player to recover fully from an ACL tear. Even then, a full recovery is often not achieved.

Harper will have his work cut out for him. Running backs value the lateral movement and quick, precise cuts in either direction off their knees, which is why ACL tears can be so debilitating. When he does return, he'll most likely have to wear a brace on the knee. It could be 2011 before we see him back at full speed. If it's sooner, then we should be grateful. If it's later, we shouldn't be trying to hurry him back.

What it means for Boise State

Boise State has already announced how Harper's injury will affect the offense in the short term.

We all spent some time this summer bemoaning the fact that the Broncos were awfully thin behind Avery and Harper, once Martin was moved to defense. Obviously, the coaches agree.

With Matt Kaiserman out with an undisclosed injury and Jarvis Hodge only effective in late-game, special Jarvis Hodge packages, the clear solution was to bring back Martin. He looked great in fall scrimmage, and he has impressed in spot duty so far this season.

But is he ready to carry more of the workload? Specifically, how do his skills compare to those of Harper?

Well, as it sits now, the Broncos have more of a true Thunder and Lightning than they did when it was Avery and Harper in the backfield. Harper's skills were very similar to Avery's skills - make people miss, use speed to break away from defenders, twist and turn for the tough yards. Martin runs angry, downhill, and with a vengeance. Neither Harper nor Avery run like that.

I think the addition of Martin will be a plus for the Broncos. Is he ready? We'll see. I am happy that he gets games against Bowling Green and UC Davis to get his offensive legs back under him. I hope that the Bronco coaches put him in good positions to succeed, whether that means with a fullback, in formations under center, or in space with the passing game.

And then there's this: What happens if Avery or Martin go down with an injury?

Seriously, where do the Broncos turn? Would that be the impetus needed to burn Malcolm Johnson's redshirt? Would Jarvis Hodge take over at No. 2? How seriously is Matt Kaiserman hurt? I don't have any answers to these questions, and hopefully I won't need any.

Who will replace Harper's production?

Let's not gloss over this fact: When D.J. Harper went down with his injury, he was Boise State's best running back. Anyone disagree with that? Harper had more yards and more TDs than Jeremy Avery, and he had flashed the home run threat that used to be Avery's calling card last season. You can argue that Avery didn't have as many opportunities or as much open real estate to operate in, and you might be right. But the fact is that Harper was running the ball better than anyone else on the Boise State roster when he went down.

Obviously, his loss after Avery's breakout game against the Bulldogs seems less damaging, and there may be some truth to that. I felt that Avery stepped up his game after Harper went down, and I think that he will be up to the task of replacing some of Harper's production now that he's out. In the Broncos' first two games, I suggested that Avery was becoming last year's Ian Johson - the plodding, tough yards back to Harper's Avery-esque change of pace. Perhaps the analogy will hold true, albeit with Doug Martin taking on the change of pace role.

I think Avery is capable of stepping up his play to be an every down, go-to running back. I think he can handle 20 carries a game and five to eight catches. I don't think Boise State coaches will let him get those numbers if they can help it, but I don't doubt that Avery is up to the task. Plus, with Avery missing time of his own all fall camp, he might just now be getting healthy and hitting his stride. In that case, watch out.

Next season and beyond

The Broncos have been stacked at running back since the days of David Mikell and Lee Marks, so there are plenty of running backs with plans to contribute over the next several seasons. Here's a breakdown of the year-by-year RB roster:

Next year, coaches will have the same dilemma that they had this year: What to do with three uber-talented tailbacks. Will they move Martin back to defense? Will they work Harper back slowly as the No. 3?

In 2011, a tailback duo of Harper and Martin looks like a safe bet, and it will give stud Malcolm Johnson some more time to develop. By 2012, Johnson could very well be the feature back, more in a role of Ian Johnson circa 2006. It could be the earliest that the Broncos return to being a one-back team.

Harper will be missed. There's no doubt about that. But one of the benefits of having such a stacked, deep program is that his loss is not the end of the world. There are a couple important points to consider:

Boise State has been blessed to not have too many major injuries to major players over the years. Some Bronco fans might not have considered Harper to be a major player, but those people weren't watching right. He was hugely important to the success of the offense to this point in the season. He will be missed. But such is life in big-time college football.