Share All sharing options for: Game balls and player ratings for Boise State vs. Fresno State

Boise State beat Fresno State on Friday, despite how you may have felt immediately after the game. There were good plays, bad plays, and whatever you call Kellen Moore's deep throws. Here are the ones that stood out the most to me, as well as individual player ratings for all involved for the Broncos. 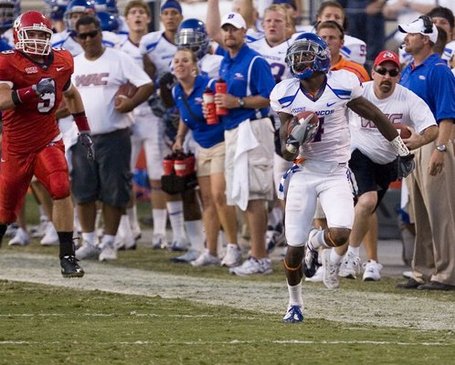 "Is this how Ian Johnson did it? With his head up? I think I'm doing it wrong." (via media.idahostatesman.com)

Fifty-one percent of you thought Young was deserving of the POG honor for his efforts in the return game and the fumble recovery game. Those are skills you cannot teach, and they are apparently skills that Young has in spades.

I mentioned this in my recap, but it bears repeating. On a night when Young had only 29 yards on three receptions, he still was Boise State's most valuable player. That speaks volumes to his growing maturity. I wouldn't be surprised to see him working the Jugs machine at the Boise Rescue Mission this week.

Everyone in the greater Boise area is saying it, so you don't need to hear it again from me. But man, was Boise State that bad at tackling or was Ryan Mathews just that good of a back? Either way, hopefully we won't be having this conversation about Bowling Green running back Willie Geter. (Hint: pretty sure we won't.)

Shoemaker took the 0-fer for the second time in three games this season. Against Oregon, I could understand. Boise State's gameplan involved more running plays and throws to the TEs. But there were simply no excuses for Shoemaker versus Fresno.

Drew has an interesting theory that he brought up last night in his recap.

And though he didn't name Shoemaker by name, I could sense it in the deafening word spaces and the accusatory commas. Tyler Shoemaker, you need to get open more often. Drew says so. Or I say so and am simply blaming others so that I don't look like the bad guy.

Winston Venable snagged Colburn's second pass of the night and took it 30 yards to the end zone, where it belonged. Colburn was wrong for throwing it, but give Venable credit for reading Colburn's eyes, making the catch, and outsprinting hefty linemen and a besmirked Colburn into the end zone.

Horizontal stretch handoff from the shotgun 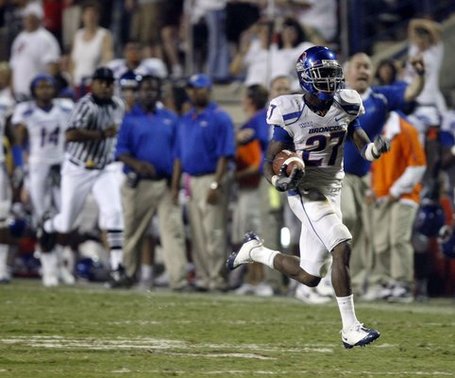 It's easier when they're not chasing you. (via media.idahostatesman.com)

If there is one play in the Bronco playbook that I never want to see again, it is this play. However, since it worked, I think I'm stuck with it.

The horizontal stretch was the one that Avery took 74 yards to the 1-yard line before fumbling. I despise the play because it is a) expressly horizontal, b) a running play from the shotgun, and c) a waste of time 90 percent of the time that the Broncos run it against fast, penetrating defenses. In other words, look for it a lot next week.

Coach of the Game

Not only did Coach Pete keep his cool on the sideline, but he is also not Pat Hill. And I wasn't about to give this award to Hill.

Austin Pettis - 7 - A quiet night for Pettis receiving, other than his slick TD catch on the fade route. What I was most impressed with was Pettis' downfield blocking. The Broncos would not have had as many big plays as they did were it not for Pettis.

Titus Young - 8 - Like I said, very impressive. Young found ways to impact the game with his hustle, his hard work, and his athleticism. There is more to life than go routes, apparently.

Tyler Shoemaker - N/A - I have nothing to judge Shoemaker on because Shoemaker did nothing. And yes, this rating is ripped from the report card of an Idaho Vandal student athlete.

Kyle Efaw - 5 - Two catches for 23 yards will go unnoticed. His blocking was probably a bigger factor.

Tommy Gallarda - 5 - No catches for Gallarda, but his impact is typically felt in the ground game.

Thomas Byrd - 6 - Had trouble with a first half snap, but was otherwise strong in both run and pass blocking.

Will Lawrence - 7 - Pressure rarely came up the middle, which is a credit to Lawrence, Byrd and Sapien. Offensive guard has been a solid position for the Broncos so far this season.

Kellen Moore - 6 - Threw for three TDs and did an admirable job managing the offense. Missed badly on several deep throws and was constantly hurried in the pocket.

Richie Brockel - 5 - Made an impact in the running game, but not much else.

D.J. Harper - 8 - The most impressive Boise State offensive player prior to his knee injury. Let's hope it is not serious.

Jeremy Avery - 8 - Looked to be having a quiet night prior to the second half. Hit the hole with abandon, decisive on his cuts, and blazing with his speed. Does natural grass make that much of a difference to him? He looked like a different back.

Ryan Winterswyk - 7 - Quietly had four tackles and 1.5 TFLs. His impact hasn't been noticed much this season, but he has been playing well.

Billy Winn - 8 - Great, great work all game long. Finished with three TFLs and tied for the team lead in tackles. The only way he could have earned a higher rating is if he had blown up one of Mathews' long runs.

Chase Baker - 7 - Another solid game from Baker. Split a sack with Winterswyk and got into the backfield on a handful of occasions.

Jarrell Root - 4 - Quiet night. Didn't crack the scorebook at all.

Byron Hout - 4 - Didn't have an impact. Would have liked to see him more in the 3-3-5 but the situations never called for it.

Shea McClellin - 4 - Still working himself into gameshape, it seems. Should be better in a couple weeks, just in time for the WAC schedule.

Derrell Acrey - 6 - Only one tackle on the night for Acrey. When Fresno focused so much on their running game, you need more from a middle linebacker. His pick of Colburn before the half was a great play.

Aaron Tevis - 5 - Didn't do much until his big hit on Colburn, made possible by Tevis being blocked in the back by a Fresno receiver.

Winston Venable - 8 - Loved the passion and aggression he played with. With more playing time, he might challenge Ellis Powers' production from last season. Didn't have to work too hard on his pick six, but he made the play anyway. His blitzes were powerful and effective. More playing time!

Jason Robinson - 5 - Seemed a step slow to react on several plays. His first quarter tackle on third down was Jeron Johnson-esque.

Kyle Wilson - 6 - Survived in one-on-one coverage on the edge, but it was kind of scary. Good in run support for the most part, except noticeably late or out of position on Mathews' third TD run.

Jeron Johnson - 4 - Missed several tackles and heard about it from Coach Pete on the sideline. I have to think his play on Friday night was an exception.

George Iloka - 7 - Tied for the team lead in tackles with six. Looked solid in run support and quick to the ball when it was in his area. His timing to break up a long pass in the second half was just off.

Kyle Brotzman - 6 - Didn't miss a field goal from the left hash, so that's a plus. Missing clutch fourth quarter opportunities due to cramps is a slight concern.

Coaching staff - 7 - Offensive adjustments at halftime helped. Defensive gameplan put defenders in the right places. Would have liked to see Harsin give help to Matt Slater earlier in the first half. Not much to complain about overall.

Thoughts on these ratings? Anyone you think deserves higher or lower grades? Share your thoughts in the comments.