Opponent preview: Can Fresno State's offense succeed on third down?

Share All sharing options for: Opponent preview: Can Fresno State's offense succeed on third down?

Boise State rolled over Miami (OH) on Saturday, but the Broncos gave out charity third down conversions all game long. Meanwhile, Fresno hung tight with Wisconsin courtesy of a strong showing with its third down offense.

What will happen on third downs on Friday when the Bulldogs and Broncos meet? Which team will have the upper hand? And will this be the deciding factor in the game? Let's discuss.

The Bulldogs lost a tough one to Wisconsin in double overtime last week, but they looked good doing it. QB Ryan Colburn was solid for awhile before succumbing to Brandstaterness and throwing the game away with a 2OT interception.

What did we learn from the game? For starters, Fresno continues to be competitive against BCS teams. Also, the Fresno offense can put points on the board when facing average defenses and secondaries. The Fresno defense, meanwhile, can look good at times, but before you know it, they've given up 34 points.

As you are sure to hear about all week long, the Fresno State offense is as healthy as it has ever been, which apparently spells the end of the world for any team unlucky enough to cross its path. Except Wisconsin. And, actually, only UC Davis so far. But it's September! The leaves are just turning! A Madea movie is the No. 1 movie in the country! This type of thing is to be expected. 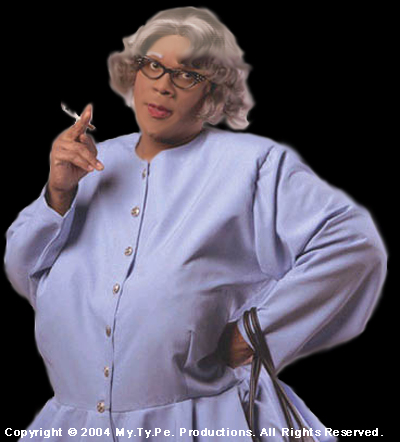 Seriously, though, there are a lot of good players on Fresno's offense - enough to make any defensive coordinator not blow off coordinating duties. From WRs Wylie, Moore, and West, to RBs Mathews, Lonyae Miller, and Robbie Rouse, Fresno is stacked at the skill positions. QB Colburn does well with his weapons, and mobile QB Ebahn Feathers provides the token wildcat option. The offensive line lost some beef up front over the summer, but it returns enough experience to manage.

The best player on the Fresno defense is MLB Jacobs. He's a hustler. The second best player might be DE Carter. He's sort of injured (but expected to play). The Bulldogs were awful at creating turnovers last season, and they'll have to find some playmakers to turn it around in 2009.

We all remember Goessling's implosion versus Wisconsin last year. Or at least I do. It made my Christmas letter.

The sophomore rebounded nicely from his 1-for-4 against the Badgers to put together a solid season and go into 2009 as one of the best kickers in the conference. Jefferson and Wylie are dangerous on the return, meaning Kyle Brotzman and the coverage teams have their work cut out for them this week.

Fresno on third down against Wisconsin

Fresno State was 11-for-18 against Wisconsin on third downs, good enough for a 61 percent conversion rate. Here is a breakdown of what they did:

The Bulldogs averaged third and seven for the game and threw the ball 16 times out of their 18 tries. The only two rushes came from quarterbacks Feathers and Colburn. No running backs touched the ball on Fresno's five shortest third downs, which went pass, pass, QB rush, interception, pass.

Up until the fourth quarter, Fresno managed to get into relatively workable third down situations. Before their 3rd and 19 midway through the fourth, the Bulldogs' worst third down was a third and 12 that they failed to convert (Fresno went 1-for-4 on third downs of 10 or more yards). Early in the game, FSU was able to earn positive plays on first and second downs to make third downs much more manageable.

Boise State on third down this season

The Oregon game was simply an incredible effort by the defense, which was at the top of its game all night long. The Miami (OH) game? Eh, not so much.

Granted, Boise State did manage to pitch the shutout over the RedHawks, but as the conversion percentages show, Miami probably took a moral victory away from scoring first downs nearly half of the time on third down.

The interesting part when you look at the stats is that Miami was able to convert third downs pretty much regardless of distance. Several times on 3rd and 10 or 3rd and 12, RedHawk QB Daniel Raudabaugh found an open man who would just inch past the first down sticks (this man was often WR Armand Robinson, that scourge). Those spaces simply weren't there against Oregon. Right, Jeremiah Masoli? 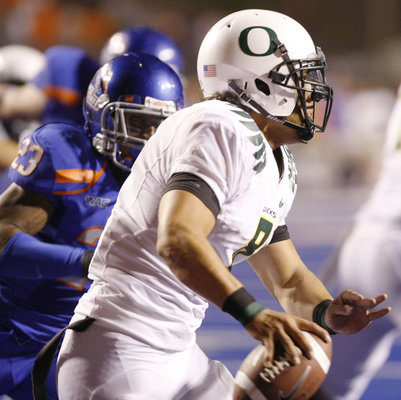 The offseason saw a fierce battle for Fresno's starting quarterback job between true freshman Derek Carr, Kaepernick-esque Ebahn Feathers, and junior Ryan Colburn. In the end, Colburn won the job (kind of?), thanks to his ability to complete shirtless passes. 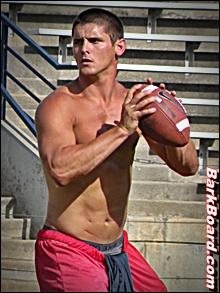 Body by Jamaica Me Tan (via media.scout.com)

A highly-sought-after recruit (aren't they all at Fresno?), the QB was listed as one of California's top 100 prospects coming out of high school in 2006 and even attended Boise State's camp. His Fresno career has seen him redshirt, earn spot duty as a freshman, and ride the pine as a sophomore, backing up senior "Touchdown" Tom Brandstater.

What did Colburn learn under the tutelage of Brandstater? You mean besides how to live down to expectations? No doubt Colburn picked up a veteran's handle of the team, although offensive coordinator changes render his veteran command of the offense moot. He throws a pretty deep ball, runs the offense well, and can be one of the WAC's best when he gets on a hot streak.

Fresno coaches seem to have complete faith in him on third downs, too, judging by the insane number of times they put the ball in his hands with a first down on the line. Have they never heard of a draw play? I guess not.

How Fresno State manages third down

As noted in the Wisconsin game, the Bulldogs chose not to run at all on third down. What would possess an offensive coordinator to do that? Ryan Mathews was running the ball well, averaging over five yards per carry, and he could hardly sniff a touch on third down. Perhaps the playcalling is a result of a lack of faith in the offensive line (which replaced its tackles this season) and heaping amounts of faith in Ryan Colburn.

The key players on Fresno's third downs are their wide receivers. With the quadruped of Ajirotutu, Wylie, Moore, and West, the Bulldogs have a ton of weapons to attack with on third down, and many different matchups to exploit. If you consider that most teams only carry three quality cornerbacks, then Fresno would have a big advantage with one of their wideouts on a linebacker or a safety.

How Boise State manages third down

How far teams have to go on third down doesn't seem to make much difference in the Broncos' conversion stats. Obviously, they would want offenses to face third and long, but practically, BSU has shown an ability to shut down teams no matter the distance.

It's really anyone's guess what Justin Wilcox will do with the defense. I expected him to bring pressure with only the front four against Miami (OH), and he blitzed constantly instead. One thing that I did notice was that Wilcox was much more likely to use the new 3-3-5 in obvious passing downs, as it puts a premium on quarterback pressure. Expect the Broncos to use this formation early and often against Fresno.

The Broncos have shown little straight-up man-to-man this season, so it will be interesting to see if this changes.

Keys to third down

Cover the man, not the grass

As ESPN's Chris Spielman is likely to outside-voice yell into his microphone at any given time on a Saturday, "Cover the man, not the grass." This is a tenet of zone coverage where defenders are taught to pick up the players trailing through their zone, rather than standing around waiting for a receiver to drop by.

I wouldn't say that the Broncos were guilty of covering grass on Saturday against Miami (OH), but they did leave RedHawk receivers with a lot of extra space on their short receiving routes - enough space that the receivers could catch the ball and turn upfield for the first down.

My take is that Boise State purposefully played a lot more soft zone than normal against Miami (OH), since the Broncos weren't too concerned about shutting down that low-powered RedHawk offense. Against Oregon, the coverage was suffocating. I would think that Boise State would return to Oregon-like intensity against Fresno.

Miami (OH) may have converted nearly half of its third down opportunities, but it rarely converted third downs consecutively. Boise State was able to hold the RedHawks in check because Miami rarely went on long drives. If the field position is right and if the Broncos don't allow big plays on first or second downs, then opposing teams' converting a third down each drive won't kill them. But it might give me an ulcer.

The Broncos can have the best coverage in the world, but it won't matter if Colburn is on his game. A perfect pass can beat tight coverage any day, and it can make a big difference in the all-important yards after the catch statistic that plays a big part in third down conversions.

The wild card in this discussion might just be the Fresno ground game. Since it had little to do with third down conversions against Wisconsin, the Fresno coaches might surprise the Broncos with some timely runs on third down. Any of you have faith in Pat Hill to figure that out?

Other factors for Friday night

Third downs are just one of many factors that could determine the outcome of the game. What are some that you'll be watching? Which ones stand out the most? Here are a couple that crossed my mind:

Boise State fans should be happy that the Broncos are facing a Fresno team that still resembles a quality opponent. Typically, the Broncos get Fresno when they're injured, beat up, and much worse than expected. Not this season.

As such, we could actually be in for a game on Friday. Anyone think this game will be close?

I believe that Boise State will shore up its third down defense for Fresno and return to the stifling unit we saw against the Ducks. I believe this because I believe anything is possible with the Boise State defense. Full disclosure: I am gullible.

What do you think? Share your thoughts about third downs, defense, and other factors in the comments.