Share All sharing options for: Is the 3-3-5 the greatest thing to happen to the Boise State defense since the 4-2-5?

If there's anything you can take from the Broncos-RedHawks game on Saturday besides a nap, it is this: Boise State unveiled a devastatingly effective new defense. Friends, let me introduce you to the 3-3-5. 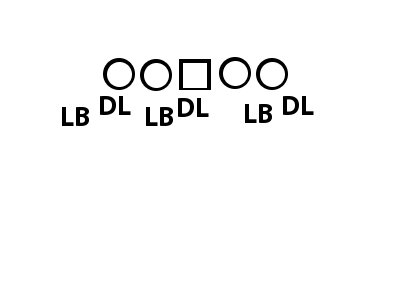 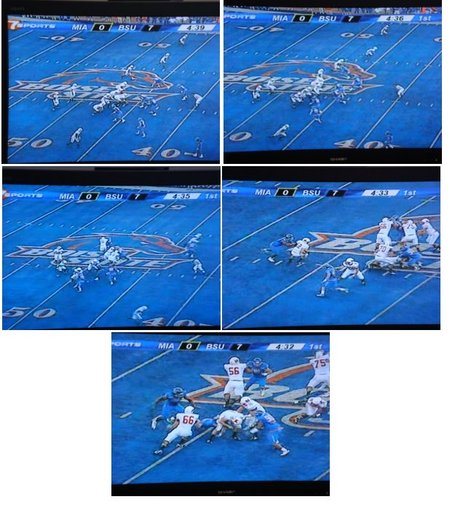 I'll start with the above example. It's 3rd and 10 from the BSU 45 just over halfway through the first quarter with the Broncos leading 7-0. Boise State lines up with what appears to be a three-man front against Miami's obvious spread passing formation.

Billy Winn stands in a two-point stance at left defensive end. Jarrell Root is lined up at middle linebacker. Ryan Winterswyk is at right defensive end. Another Bronco (Chase Baker, maybe?) lines up over center. J.C. Percy (LOLB) and Root come up to the line of scrimmage showing blitz, one on either side of Winn. A sixth Bronco (I believe it was Daron Mackey, but KTVB's stunning non-HD made it impossible to tell) shows blitz inside of Winterswyk.

At the snap, Winn, Root, Winterswyk, Percy, and Baker (?) come after the quarterback, with the sixth Bronco dropping into zone coverage. Percy rushes far outside, Root blitzes up the middle, and Winn loops around Root on a stunt. The movement up front allows Root to slide in virtually untouched, and he and Percy - who defeated his block on the outside rush - get to Raudabaugh.

QB sack. Drive over. Fistpumps all around.

This defense borrows elements from several different defenses of note, but it works so well with Boise State's incredible personnel that they field this year.

Crowding everyone at the line of scrimmage is effective because it disguises who is coming on the blitz and who is dropping back. You might have seen similar defenses in the NFL - like Pittsburgh, Baltimore, and New England - pull this stunt since it can work so well. In many senses, it boils down to some basic 3-4 principles. The 3-4 affords the defense the luxury of bringing the blitz from anywhere.

Almost every time that the Broncos pulled this defense, they did a line stunt that wreaked havoc along the Miami (OH) front. Often, it was a defensive end looping inside. Rarely was it an inside player looping out. The upfield pressure of the defensive ends, combined with the inside pressure of the stunt, worked well to collapse the pocket and leave RedHawk QB Daniel Raudabaugh nowhere to turn.

You can't love the Boise State Broncos without loving this defense.

And those are just a few of the possibilities.

The Broncos pulled off this look with virtually every personnel package they had on the field. It didn't matter which rotation of linebackers, defensive tackles, or defensive ends were in the game; Boise State went to the 3-3-5 seamlessly with anyone.

Moving a defensive end inside adds a pass rushing presence that interior linemen are not used to seeing. Similarly, Winn coming off the edge is a lot for a tackle to handle. This defense creates mismatches all over the line, and it showcases the athletic ability of the front six of the Broncos.

Most of the time the Broncos lined up in this defense, they brought five defenders. Typically, both linebackers came on the blitz and a defensive lineman or outside 'backer dropped off. Rushing five was something I did not expect the Broncos to do against the RedHawks since BSU could get pressure with its front four anyway. The surprise might have caught Miami (OH) off guard, too.

Occasionally, Boise State only brought three, choosing to drop the others into zone. This look seemed to show more later in the game and on longer downs and distances.

Behind the blitz, Boise State fell back into a zone look. The zone coverages, which could not be seen from TV angles, probably account for "hot" areas of the field where quarterbacks look to dump off passes when they are blitzed.

The When and Why

The 3-3-5 is best used on obvious passing situations, as the running game can take advantage of stunts, blitzes, and bailing linebackers. Boise State chose effective times to deploy the 3-3-5, and it played a big part in ending several RedHawk drives.

Why Boise State used the formation is up for debate.

No matter the "why," it is obvious that the Broncos have found something special. What do you think caused the change? And are you excited about the possibilities that the 3-3-5 presents?