Share All sharing options for: Game balls and player ratings for Boise State vs. Miami (OH)

As much as Boise State fans wanted the Oregon game to get here, I got the sense that they wanted the Miami (OH) game to leave just as quickly. Is there such a thing as reverse hype? Is that what David Augusto's Sunday Sports Extra had?

Before we move on to Fresno State (and we will move on), game balls are back by popular demand. And with them is a new feature, ripped straight from performance reviews: player ratings. Take a look after the jump.

Ratings on a scale of 1-10 with 1 being Nathan Enderle and 10 being Billy Winn vs. Oregon.

Austin Pettis - 8 - What didn't Pettis do? He blocked a punt, threw some nasty blocks, and led the team in receiving yards. Apart from getting caught from behind on his long first quarter catch, Pettis could do no wrong.

Titus Young - 8 - Flashed the speed we've come to know and love and didn't turn the ball over. He added a very dangerous option to the Bronco offense.

Tyler Shoemaker - 7 - Saw more balls be thrown his way, and came through with some clutch plays. His long grab over a defender looked easy but definitely wasn't.

Michael Ames - 6 - Gave way to Garrett Pendergast early and often, but Ames was solid during his time on the field. Cut down on missed blocking assignments from last week.

Kevin Sapien - 6 - Take away a false start penalty, and Sapien had a solid day. Inside pressure caused Kellen Moore to move around in the pocket a little more than he would have probably liked.

Thomas Byrd - 5 - Loses points for several low shotgun snaps and got pushed off the line on a couple of occasions.

Will Lawrence - 6 - Had his hands full with Martin Channels at times, but never gave too much ground. Looked strong in the running game.

Matt Slater - 7 - Rather anonymous, which is what you want in a left tackle.

Kellen Moore - 7 - Erratic early, Moore benefited a lot from yards after the catch from his receivers. Still, he put the ball in the right place for his receivers to make plays, and he avoided pocket pressure expertly.

D.J. Harper - 8 - Showed incredible speed motoring around the end on his long run. Looked the better of the Broncos' two running backs.

Jeremy Avery - 5 - Tough sledding for the first half and was pretty much a non-factor.

Jarrell Root - 7 - Put his strength on display with some intense pass rushing and run defense. Looked better than I'd ever seen him.

Billy Winn - 8 - A rock in the middle, Winn's tip led to a Boise State interception in the fourth.

Chase Baker - 7 - Stuffed up the running game and showed great pursuit by chasing down the ball.

Derrell Acrey - 5 - A TFL in the first quarter but not much after that.

Aaron Tevis - 7 - In on a lot of tackles and picked off his second pass in as many games.

J.C. Percy - 7 - Really made his presence known on defense. Definitely deserved the start and made the most of it.

Daron Mackey - 8 - Mackey was everywhere in the first half and showed a knack for being in the right place at the right time.

Kyle Wilson - 6 - Rarely tested deep, Wilson's night was rather quiet. Picked up a personal foul for a post-whistle shove.

Brandyn Thompson - 7 - Totally framed on that pass interference penalty, Thompson was in the right position all night. Gave up a couple catches, but not due to bad coverage.

Winston Venable - 7 - Made an early impact with his sure-tackling then gave way to Doug Martin and Jason Robinson for long stretches.

George Iloka - 8 - Great athletic play on his interception and good support in the running and passing game. His injury did not look to be serious.

Jeron Johnson - 8 - Had one pick and could have had another. Johnson didn't have much to do at his safety position on Saturday.

Kyle Brotzman - 6 - Kickoff out of bounds was no good, but he can't really be blamed for his missed PAT. Would have liked to see him try a field goal from the left hash to see how he would do. 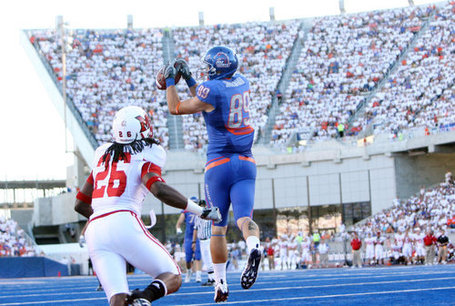 Shoemaker scores on the road against Miami (OH). (via media.idahostatesman.com)

Receiver most likely to have passes thrown his way just because

"Shoe" as he is affectionately known by fans in Bronco Stadium and people with foot fetishes was largely absent from Boise State's win over Oregon on opening night. And the Bronco coaching staff was willing to change that even if it killed them.

Kellen Moore looked Shoemaker's way all the time in the first half, even when he wasn't open, and maybe once when he wasn't even in the game. Shoemaker responded with his first touchdown catch in over a year and 55 yards total on the night.

Next week's predestined receiving target? I think it has to be Jarvis Hodge.

There are bad nicknames and then there are nicknames that probably originated on a message board. "Blu-nami," a Scout.com pronouncement of epic confusing proportions, conjurs images of bad anime movies or hokey infomercial products. I think I bought a Blu-nami once to clean my toilet. 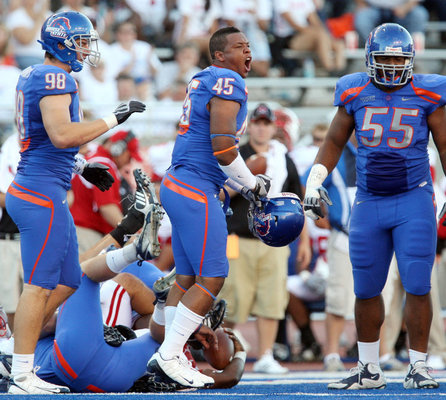 No matter your feelings on Boise State's new uniforms, you had to notice the creeping sweat that overtook several of the players on Saturday evening. I thought I had stumbled upon a PGA tournament. The new uniforms only make matters worse as the jerseys are made with a composite of two fabrics - light and breathable cordura material on the top and around the numbers, a Brawny paper towel around the midsection.

Avery's slow start to the season could be due to a million different factors. There are no big holes for him. He sat out portions of fall camp. Defenses are keying him. Avery seems to have taken on the role of Johnson from last year - pounding out tough yards to keep the chains moving and seeing his average suffer. Is that simply the job of the No. 1 Boise State running back? Only time will tell.

Best impersonation of a locomotive 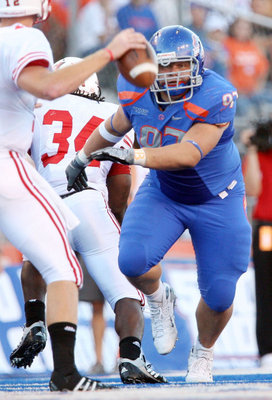 Get off the tracks, Daniel Raudabaugh! Save yourself! (via media.idahostatesman.com)

The Broncos made it official on Saturday when Moore took the field late in the second quarter. Kirby's older brother Kellen threw a pick on Kirby's first play, which Kellen probably deserved for not throwing Kirby's way the first chance he got.

Aaron Burks made huge strides in fall camp and was considered by some to have an edge over Kirby in the true freshman WR race. The good news is that as good as Burks looked and as much time as Kirby missed in fall camp with an injury, Kellen's little brother was still good enough for coaches to play him as a true freshman.

Now if only Kellen would throw him the ball ...

A go-to position against Oregon, the Broncos rarely looked the TEs' way on Saturday, choosing instead to eat up yards with the wideouts. Kyle Efaw had one catch for seven yards. Tommy Gallarda had none for zero. My college football fantasy team was super bummed.

The most amazing defensive philosophy change since the 4-2-5

I cannot do this formation justice in this space, so expect another post about it later today. Let's just say that it was awesome to watch, and Justin Wilcox is a genius. I would give him a thousand game balls if I could.