Share All sharing options for: Final pregame thoughts on Boise State vs. Miami (OH): How good is this Boise State football team?

Given the Broncos' nonconference opponents and the ineptitude of the WAC, finding Boise State's true value this season might be tough. The answer might have been given last Thursday in the Broncos' dismantling of Oregon, but I'd argue that we'll find out just as much about Boise State's greatness Saturday against Miami (OH) than we did on Thursday against the Ducks.

Who's with me? Let's discuss.

There is a tenet of Football Outsiders that states:

So settle down, Idaho fans.

This idea was first presented in regards to NFL teams, but I think it works for college as well. Take the 2007 Hawaii Warriors, for instance. They were in two-score games against seven of their 12 regular season opponents, including Utah State. A Brent Guy Utah State, mind you. 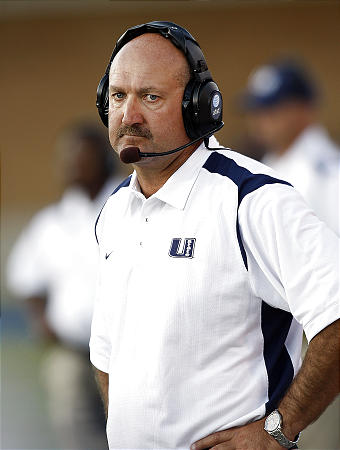 "Did someone say my name?" (via www.deseretnews.com)

The Warriors did not put up championship-caliber performances against mediocre competition, and then they got completely annihilated against Georgia.

The Football Outsiders mantra makes sense because of how fluky football games can be. Two evenly matched teams can have a game decided by a bounce of a football or a single missed assignment. On the other hand, when teams face bad opponents, the margin for error is so much greater that a couple of lucky plays shouldn't determine the outcome. As Football Outsiders puts it:

Championship teams beat their good opponents convincingly and destroy the cupcakes on the schedule.

It is safe to say that the Broncos beat the Ducks convincingly. What will they do with the RedHawks?

More importantly, will the outcome of Saturday's game determine whether or not the Broncos are championship-caliber? If BSU squeaks by in a close one, are they doomed to muddle around mediocrity all year?

I believe that the way the Broncos win will say a lot about what kind of team they have this season. But I don't think that a close loss will spell doom. Boise State's Fiesta Bowl team barely beat Wyoming that season. Utah barely scraped by a number of schools last year. Success at the college level can be achieved without a championship-caliber team.

But it sure would be a lot more fun to have both.

Think we'll find out what we have on Saturday?

As usual, you commenters know more about what's going on than I do. Here's some evidence.

Our short crossing routes and screens will eat their young front-7 alive! And you know Baker and Winn know that their center knows he is a true frosh.

I know that they know that he knows, which is why I personally recommended to Miami coach Mike Haywood that he replace the center with the long snapper and work exclusively out of 15-yard shotguns all game.

Baker and Winn - and for that matter, the entire defensive line - will have every opportunity for a big game on Saturday. I wouldn't be surprised to see the Broncos rarely blitz and simply count on the pressure of the front four to get it done. What's the over-under on sacks? Seven?

Miami will try and surprise us.

I get what Rand is saying, and I completely agree. Miami will HAVE to surprise the Broncos in order to be successful. Which begs the question: Is it a surprise if we know it's coming?

I wouldn't be surprised (there's that word again) if the RedHawks go for it often on fourth down, fake some punts, and even try an onside kick the one chance they get to kick the ball off. I figure if Titus Young is returning it to the 40 anyway, what do you have to lose?

My analysis: …When is the Fresno game again?…