No one knows the Oregon Ducks better than their SB Nation blog Addicted to Quack. Well, no one except Kellen Moore.

The ATQers agreed to answer some questions about Thursday's Ducks-Broncos game, and I returned the favor over on their site. In addition, the rival blog bet format from last year will return in all of its glorious wordiness. Winning team's blog gets a free post on the losing team's blog. Sequel, anyone?

Check out the ATQ interview after the jump.

Instead, I'll talk about why the hit was important. No, it wasn't the key in the game last year. But you know what, you don't f*** with another teams QB, especially illegally. It's like when you throw at a batter in baseball. There will be some sort of reponse. Now, I don't feel that Oregon will do anything overtly illegal. They know that the refs are gonna be looking for late hits and all that. But they will do their best to physically punish Kellen Moore every chance they get. If any BSU fans watched the Holiday Bowl last year, Zac Robinson was absolutely punished, not only on the well publicized TJ Ward hit, but throughout the whole game. Oregon will be bringing the pressure all night long, and it will be interesting to see how Moore reacts to the physicality of that, as well as the pressure, especially over the entire game.

Secondary is the weakest. BSU fans know how it faltered last year, and it was a constant source of frustration, even though two second round draft picks were in the unit. Replacing those players will be key to the success of the defense. In a lot of ways, however, I think that Duck fans are a bit optimistic, because we will have a healthy Walter Thurmond, as well as a new Rover, which may hurt our run defense a bit, but will hopefully help our pass defense. 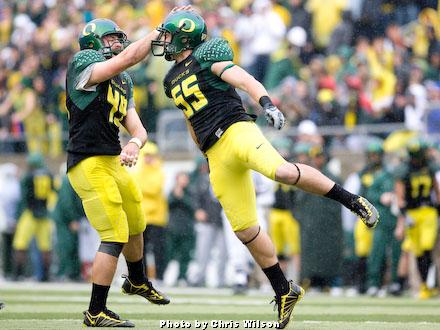 "Tackling is the best!" (via media.scout.com)

Our strongest unit is our linebackers. The unit goes 8 deep, and it is absolutely oozing with talent and experience. The unit is led by Casey Matthews (brother of now NFL linebacker Clay Matthews), who added 15 pounds over the offseason (moving him up to 235) while increasing his speed. His counterpart, Spencer Paysinger, dropped his 40 time from 4.62 to 4.57, while adding 18 pounds. The group is rounded out by Eddie Pleasant, who is the fastest linebacker on the team (4.72 electronic 40), while being the strongest as well. This is one of the strongest, fastest, most versatile groups of linebackers Oregon has ever put on the field. I am incredibly excited to see what these guys do on the defensive side of the ball. We're hoping their improvement will take a lot of pressure off the secondary, especially in coverage of tight ends and running backs.

Who is the most important player on your offense? Bonus points for naming a player who is not Jeremiah Masoli or LeGarrette Blount.

As much as I want to say someone other than Masoli...well, it's Masoli (or whoever plays at QB). He is responsible for distributing the ball and making quick decisions on the various option plays Oregon runs. It's tough to say that a skill position player is most important because of the number of very good players Oregon has. The receiving corp is 5 deep, the running backs are very strong with Blount backed up by some other strong backs, the new TAZER position will get the ball into talented hands. Basically, there are so many players that can do things with the ball, that if one of those players is off, there are others that can take over, save for maybe Blount. If Masoli is making smart decisions and getting the ball where it needs to be, watch out.

Is there any concern about Masoli at quarterback? Accuracy? Durability? Decision-making? What is his greatest strength?

The big concern is accuracy. While he has significantly improved in his passing, especially in short-ish throws, his long ball has left something to be desired, and he has consistency issues with these throws. If he can start hitting Jamere Holland (one of the fastest players in the nation) on his long routes, then there is very little that can stop him.

His greatest strength is his decision making. He had a lower INT rate than Kellen Moore last season, and in my opinion is better at running the spread option than Dennis Dixon was.

Talk to me about T.J. Ward. Do not use the word "awesome" more than once.

TJ Ward is one of the most physical players we've seen at Oregon in some time. What's more, he knows how to hit without breaking the rules (what, you thought I'd make it through without a single Powers/Johnson jab?). More than that, he's a very hard worker. He came in as a walk-on, and worked his way to two-year starter.

However, he is a below average (at best) cover safety, and that played a big part in Oregon's secondary issues last season. He and Chung played too similar styles to be very effective together. Hopefully, our new rover (Javes Lewis or Marvin Johnson) will be able to handle the safety aspects of that position to cover up Ward's deficiencies.

With up to five first-time starters on defense, what do you see as the key to a solid defensive effort on Thursday night?

I'm gonna say the defensive line. Though Oregon will be breaking in three new starters, they are led by new defensive line coach Jerry Azzinaro, who has come in like a whirlwind, and given Oregon fans a lot of confidence in the unit, which is small but athletic. How this unit can handle Boise's offensive line will dictate of a lot of the game.

If they can get consistent pressure without LB help, and control the line, Oregon's defense will be set up for success. If they can't do these things, Boise will have the early upper hand.

Chip Kelly: What are the pros and cons of Kelly debuting as UO's head coach in such a high-profile game?

I honestly don't see all that many to either side. I think that coaches' efforts during games are often times exaggerated. Unless you are absolutely terrible at in-game changes (Ron Zook), you are probably a pretty good coach. Kelly has proven himself to be a very good planner, and is looking to be a very good motivator. I don't think that we'll really be able to tell a difference between Kelly and Bellotti during the game.

Any concerns about how Kelly will manage the pressure of his debut?

Let's put this game in perspective. What kind of impact will this game have on the rest of Oregon's season?

It could have a very big impact. If Oregon loses and falters confidence-wise, they will be lucky to get out of September 2-2. Then again, they could also learn from mistakes and come away stronger, you just never know how a team will react in that situation. Either way, Oregon will have chances to redeem themselves, but that is a double-edged sword, as that is also another opportunity to falter in the spotlight.

Are we Bronco fans and Oregon fans placing too much value on this opening game? Is that just a product of a big-time season opener?

In the grand scheme of things, yes, as it's only the first game. But at the same time, if BSU wants to make the BCS, they must win this game. And Oregon is playing not only for their own respect, but the respect of the Pac-10. This game will be remembered, no matter the outcome. Anytime you have a game like that, it is important. When you have nine months to prepare, it's bound to be extremely hyped.

Lightning round. I say a word, you say the first word that comes to mind.

For more expert analysis and Duck-centric conversation, visit Addicted to Quack throughout the season.