We've come to the opponent preview where I finally stop belittling fellow WAC teams. Or do I?

Common sense would have me shaking in my Marty Tadman jersey at this year's rendition of the Pack. Kaepernick, Moch, Basped? Oh my! But then again, weren't all those guys on the team last year? Wasn't the Boise State - Nevada game two pick-sixes away from a yawner? Aren't I humanly incapable of showing respect for another conference team?

Yes to all those questions. And no to Nevada knocking the Broncos off their WAC pedestal this season.

Is the Wolf Pack the new archenemy of Boise State?

It is beginning to look that way. Certainly, they have been more competitive in recent years than Idaho or Fresno State, although the Vandals will always hold a special place (meant reverentially and retardedly) in the hearts of Bronco fans. Hawaii was fun for awhile. SJSU is fun for about a week every year. But Nevada has really taken the mantle of most loathsome team on the conference calendar.

Certainly, they are the ones most likely to give the Broncos a run for their money. Speaking of running, anyone else think Colin Kaepernick looks like a robot ostrich? 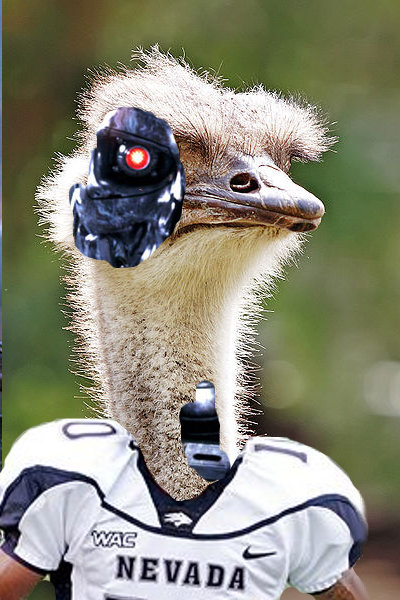 Why should I think that Nevada's secondary is going to be any different this year?

Well last year, the Pack was private-Methodist-school-intramurals terrible at defending the pass, to the tune of No. 120 (dead last) in the NCAA and 320 yards per game.

Chris Ault promises that defense will be a priority starting now. Yes, he's been coaching 24 years. But when you witness an apocalypse like Nevada's pass D in 2008, you're liable to try a bunch of things you previously thought were pointless. Nevada has the players to put pressure on the quarterbacks, so if they can find a handful of players who can stay in the general vicinity of wide receivers, you'd have to think they can improve on last year's result. If not, expect Ault to break with tradition again and start recruiting defensive players.

Since passing isn't Kaepernick's specialty, what's stopping the Wolf Pack from running the ball on every down?

Another reason to keep it on the ground is the loss of leading receivers Marko Mitchell and Mike McCoy. The wide receivers for UNR are rather green. Junior Chris Wellington is the most well-known holdover, and he managed 632 and six TDs last season. Kaepernick can make plays happen with his feet, but someone is going to have to be able to catch the long bombs and close range missiles he fires willy-nilly on the move. That is, if Ault even bothers calling a passing play.

Boise State's been amped about the Oregon game since January. Is the same true for UNR and Notre Dame?

Since I don't live in Reno (thank GOODNESS), I can't say for sure, but I've heard that Pack fans have extremely high hopes for this Notre Dame showdown. Are Nevada fans expecting a win? Many of them are. At the very least, they are expecting Kaepernick to really make an impression on the national television audience and Tom Hammond. It's not a make-or-break game for Nevada, but if they get past Notre Dame, they'll be getting a lot of attention in the coming weeks.

What is the Achille's heel of Nevada?

Well besides pass defense, WR depth, and the innate ability to lose at least one game they should win, the Wolf Pack are not very good on special teams. Phil Steele ranked Nevada No. 112, 99, 71, 99, and 94 over the past five years, and with the Wolf Pack losing kicker Brett Jaekle, special teams could be another adventure in 2009. Especially if the Pack recruited this kid:

I've had a lot of fun with this preview, but now it's time to get serious. My feelings about the Nevada Wolf Pack are probably a lot more tempered than those that you would find a lot of other places. People are gushing over Nevada's skill players, and with good reason. The Wolf Pack is a good team with a playmaking quarterback and strong running backs who will succeed behind a talented offensive line. Plus, their defense has a smattering of studs, and they are coached by a Hall of Famer.

On top of all this, the prospect of facing the Wolf Pack on the football field frightens me a little. Even after witnessing the Broncos completely shut down the UNR offense for three quarters last season, I don't look forward to a more experienced Kaepernick and a well-oiled machine of an offense rolling into Boise in November.

To be sure, Nevada is gunning for the Broncos. And if I were writing a preview of the Nevada-Boise State game right now, I would be significantly more respectful and fearful.

The perfect storm of offensive prowess and defensive okayness could come together for Nevada on any given week, but it won't come together for them on every given week. The pass defense is too bad to be consistent, even if they are improved over last year's simply horrendous unit. The special teams are capable of causing multiple losses on the year. Defenses will copy Boise State's blueprint for success against the Pistol, and the teams with good enough athletes will be able to shut that machine down.

Nevada could very well give the Broncos a run for their money in the de facto WAC championship in late November. However, I'd be surprised if the WAC championship hadn't already been decided.

Nevada is scary in small doses, but until they prove that they can string together a season of consistency, domination, and solid play on both sides of the ball, they are still Nevada - old, undependable, 7-5 Nevada.

Perfect Situation
Nevada turns into 2009's BCS buster by sweeping Notre Dame and Mizzou in nonconference, steamrolling the WAC on their way to a BCS bowl, and making life a living hell for Bronco fans

Reality
Nevada plays tough against Notre Dame and Missouri, loses both, drops one or two conference games before the BSU showdown, loses that one, goes to the New Mexico Bowl