The Duralog of Boise State good vibes that is still burning from last season's win over Oregon is just about finished. The warm fuzzies end Thursday night when a new chapter in the incredibly short, two-chapter book on Ducks vs. Broncos (tentatively titled: Quit hitting me: the Jeremiah Masoli story) is written.

Football is almost here, but it's not the same football that any other school in the country (except for maybe VaTech and Alabama) has been looking forward to. This game has huge ramifications for Boise State's BCS hopes. It has huge ramifications for LaGarrette Blount's MySpace friend requests. And there are about a billion different ways you can look at the matchup.

I've chosen one of the most overlooked, but one that I feel could become very important: Oregon's run defense. Let's talk about it, and feel free to add your most important factor in the comments.

The Oregon offense is Jeremiah Masoli, for better or for worse. There are loads of talented skill players around him and a green offensive line in front of him, but Masoli is the heart of the Duck attack. If he is on his game, he is one of the best in the country. If he is on his back, then Ryan Winterswyk WIN!

There will be up to five first-timers on the Ducks' starting defense on Thursday, but that isn't to say that this unit is short on talent. A loaded linebacker corps is the meat, T.J. Ward is the special sauce, and veterans like Thurmond and Tukuafu are the bread that holds the whole thing together. Still, the sandwich seems to be missing something. Game experience, maybe?

This has nothing to do with special teams, but I thought I should mention Oregon's tazer players: LaMichael James and Kenjon Barner. The tazer is Oregon's answer to traditional football positions; it's an athlete who can make plays from anywhere. Get ready to hear this term about 20 times on the ESPN broadcast. 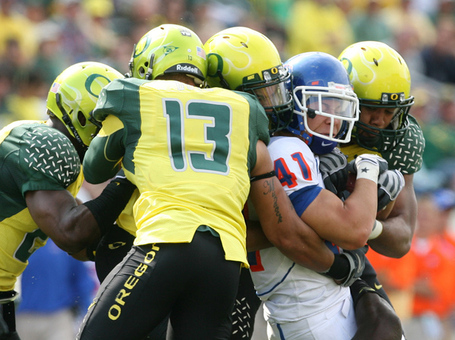 Boise State ran for 38 yards on 35 carries (1.1 average) with one touchdown and a long rush of eight.

Credit the Oregon defense for taking away the run and making Kellen Moore beat them. Credit Kellen Moore for beating them. Credit me for not injuring myself mid-fistpump. Credit Mike Bellotti for that immaculate goatee. And when you're done crediting people, know this: The Bronco offensive line really struggled moving Oregon defenders out of the way and creating holes for the backs. Was it a size/strength issue, similar TCU truck that hit the Broncos? Was it something wrong with the backs?

I'm siding with size and strength (or am I siding against it?). Boise State's O-line looked just fine protecting Kellen Moore on passing plays. The issue wasn't form or technique.  It was owning the line of scrimmage that really went Oregon's way. Nothing shows this more  than the statistics from Oregons' defensive line. Typically, linebackers lead the team in tackles, or when prolific passing offenses take to the air, players in the secondary get big tackle totals. Rarely do you see it happen along the defensive line.

However, Oregon's D-line really filled the stat box, with one player tying for team lead in tackles and another racking up an inordinate amount of tackles for loss. Combined, four members of Oregon's defensive line - Ra'Shon Harris, Will Tukuafu, Nick Reed, and Cole Linehan - recorded 26 tackles, six TFLs, and one sack. Incredible.

What has changed over the past 12 months

Attrition has struck both the Oregon D-line and the Boise State O-line. The Broncos lost all-conference G/T Andrew Woodruff and his bearded buddy John Gott. The Ducks graduated Reed, Linehan, and Harris, in addition to linebackers Jerome Boyd and John Bacon.

Reed is the most notable absence along the Oregon defensive front. He was an All-American last year, recording 13 sacks, 7 TFLs, and five FR, but his departure might not be the most important hole up front for the Ducks. Both defensive tackles, Linehan and Harris, are gone, leaving a big void for a rotation of JCs and others to fill. Blake Ferras leads a merry-go-round at the position that will sub in as many as four at defensive tackle. The Ducks replace Reed with inexperienced junior Kenny Rowe.

Boise State's O-line has a new look again, just as it did in virtually every game last season. The Broncos will start the year with first-timers Michael Ames and Will Lawrence in the lineup. The other three positions return experience from last year, including center stud Thomas Byrd. Kevin Sapien and Matt Slater are the other two starters, and Nate Potter might see the field in optimal false start packages.

Spotlight on: DE Will Tukuafu 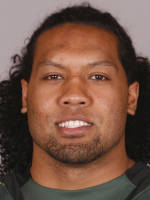 Coming out of Scottsdale CC, Tukuafu was ranked as one of the two best DL JCs in the nation and reached as high as No. 7 overall on Rivals list of JC players. He was originally recruited by BYU, going so far as to sign a letter of intent with the school. He chose to take a two-year mission instead, and found himself on the CC route when he returned. Thanks to his time away, he is now listed as the oldest player on the Oregon roster at age 25.

His old man strength serves him well. At least, that's what I attribute his being able to sack Jake Locker one-handed.

Tukuafu, a team captain this season and the only returning starter on the defensive line, could be lined up often against Ames, playing in his first actual game in two years. How will Ames handle the new guy? Is Tukuafu's presence the reason why Tommy Gallarda was picked to start at TE against the Ducks? What will the coaching staff do to handle this matchup? I'd like to know your thoughts because none of mine end well.

Can Boise State beat Oregon without an effective running game?

Ah, one of the cruxes.

Well, the obvious answer last year was yes. Boise State would have done just as well letting Kellen Moore fall forward every time they called a running play, and still the Broncos built a 24-point lead and hung on for a win in Eugene. The running game was not needed to win. It would have been nice to have around, especially when BSU needed to salt away some time late in the game. It also might have helped Ian Johnson get drafted, but oh well.

The Broncos proved time and again that they didn't need the running game to be successful last year. But was that a product of their easy schedule? How many times out of 100 would the Broncos beat the Ducks by only running for one yard per carry?

It's nice to dwell on the win from last year, but this is not last year's Bronco team (or Duck team, for that matter). One of the most disconcerting parts of this discussion is that we don't know how the Broncos will perform this year. What do you think? Is the 2009 BSU team built to win without the running game?

The signs seem to say yes. Kellen Moore should be improved over last year, which is just an impossibly crazy idea. The Oregon secondary might be the team's biggest weakness, and with the Boise State's passing game being their biggest strength, well, I'll let you draw your own conclusions. Where the running game really makes its money is if the Broncos get a lead late in the game. As my friends at Football Outsiders love to point out, "You run when you win, you don't win when you run." Let me let them explain.

The first article ever written for Football Outsiders was devoted to debunking the myth of "establishing the run." There is no correlation whatsoever between giving your running backs a lot of carries early in the game and winning the game. Just running the ball is not going to help a team score; it has to run successfully.

In general, winning teams have a lot of carries because their running backs are running out the clock at the end of wins, not because they are running wild early in games.

How will Oregon defend the Broncos

Of course, Oregon's run defense is not just limited to the four guys up front. The Ducks have a deep and talented linebacker trio as well with Spencer Paysinger, Casey Matthews, and Eddie Pleasant. These three players could be the key to making up for the inexperience along the defensive line.

Also, Oregon has the luxury of bringing in rover person Javes Lewis (and sometimes Marvin Johnson) to support the run from his quasi-safety position. At times, Boise State could see eight in the box. But will they?

Given how coolly Kellen Moore shred the Oregon defense last season, you have to wonder if the Ducks won't try to take away the pass and make the Broncos beat them on the ground. This will be fascinating to watch. Seriously, watch it. In the first couple series of the game, strategies should be clear, and you should be able to tell which direction these teams are going. Does Boise State have what it takes to fashion a successful running game off of a traditional seven-man front?

How will Boise State come out against the Ducks

The Broncos could come out with guns a-blazing, using the pass to set up the run. We saw in previous games last year that BSU is not afraid to completely abandon the run in favor of chewing up yards through the air. If it's not working, coaches seem to think, then why hammer it down.

In scrimmages this fall, the passing offense seemed to be a step ahead of the rushing O, and potential starter Jeremy Avery was absent from it all. He even slipped a little on the depth chart into 1A status slightly above 1B D.J. Harper. Both backs are very talented. But you have to wonder how much faith the Broncos have in their running game at this point.

How do you think the Bronco running game is feeling at this point?

Other factors in the Oregon run defense debate

Are there some other factors that I overlooked or failed to mention?

The Oregon run defense is just one of a myriad of little battles that could mean win it or lose it for either team. Do you have a factor or matchup that you'll be watching? Here are some others I thought of off the top of my head.

There are loads more. Which one are you looking at?

So many different things could happen on Thursday, rendering any one of these conclusions irrelevant or prophetic. I'm hoping for the latter.

Which of the following conclusions are you?

I'm just getting warmed up with conclusions, but I should probably stop there. How do you guys see this matchup playing out? Where on the scale of importance does it fall? What factors did I miss? What players should I have mentioned? And most importantly ...

.. are you ready to finally get this thing over with?