BSU position preview: Is the 2009 Boise State secondary the WAC's best ever?

Share All sharing options for: BSU position preview: Is the 2009 Boise State secondary the WAC's best ever?

As difficult as it was to pass on the Broncos last season, it will be even tougher to do so this year. With four out of five starters returning and an All-American candidate holding down one corner, Boise State has one of the best secondaries in the West and one of the best WAC secondaries of all-time. How does the 2009 Bronco secondary stack up to the all-time greats? And how will their legacy be written this year? Let's find out.

(You've stumbled upon a series of Boise State position previews leading up to the Oregon game. Previously: The new breed of 4-2-5 linebacker. Next up: OREGON PREVIEWS!!!.)

The starting five in the Boise State secondary are pretty much set in stone. Kyle Wilson and Brandyn Thompson on the corners, Jeron Johnson and George Iloka at safety, and Winston Venable at the safetylinebacker. Out of those five positions, I would expect Venable to switch off most often, probably with Doug Martin. The other four positions will probably stay on the field for every defensive snap.

The exciting part of the Bronco secondary is its depth. Behind Wilson and Thompson are Jamar Taylor and Jerrell Gavins, two players who would be starters on several other WAC teams. Jason Robinson was a former Bronco starter, so you know he has talent. Cedric Febis looked solid in fall practices. Every single player on the Broncos' two-deep secondary depth chart could come in and do a stellar job. It says a lot about the depth of the Broncos, but it also speaks volumes to the talent of the players in the starting lineup. 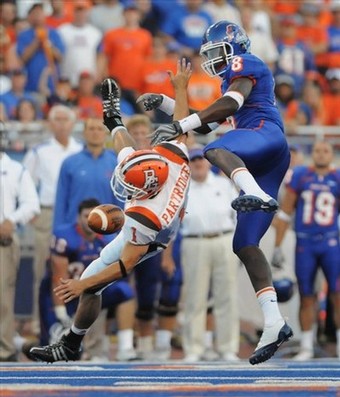 There were so many bright spots in the Boise State defense last fall that I'd hate to single just one of them out. But, man, did you see the Bronco secondary last season?

Boise State was in the Top 20 in several national pass defense statistics, holding opponents to a 50 percent completion rate and less than 200 yards per game. Take out the second half of the Oregon game, and those numbers would look even better. Also, the BSU secondary was a big play mecca, nabbing 22 INTs. Of those 22, 17 came from the starting five of Powers, Wilson, Thompson, Johnson, and Iloka.

Boise State was rewarded for its stellar play when the postseason award circuit made its rounds. Wilson and Powers landed on the All-WAC first team; Johnson made the second team. True freshman Iloka found himself on national freshman all-American teams. It was almost enough to make you forget about Marty Tadman. Almost.

(Aside: The rise of lock-down corners like Wilson has allowed the Boise State defense an amazing level of freedom to run more risky blitzes and exotic schemes. Players like Wilson change everything. Just ask Chase Holbrook's NFL draft stock.)

Hype for this fall

The most wonderful part of last year's breakout season was the fact that four out of the five secondary studs would be returning in 2009. Powers was the only one to graduate, and although he leaves a big hole to fill, having the other four positions set in stone is enough to have the Bronco secondary as one of the most hyped units in the WAC this season.

For starters, Kyle Wilson is the WAC's preseason DPOY. And if that's not enough, he is also projected as a first- or second-round draft pick in the 2010 NFL Draft. He has found his name on several preseason watch lists, including the Thorpe and the Bednarik, and he is a consensus preseason WAC first-teamer.

The other players in the secondary have also had their names bandied about this offseason. The most complimentary place for the Broncos has been Phil Steele's season preview magazine, where three of the four starters in the secondary were named to his All-WAC team. The only one not on the first team is Iloka, who winds up third behind two Idaho safeties, one of whom left the program.

Another popular preseason All-WAC team (the WAC does not release an official team) is hosted at the CBS Sports website. Naturally, Kyle Wilson makes the team, but he is the only Bronco. CBS puts LaTech's Antonio Baker, SJSU's Duke Ihenacho, and Nevada's Jonathon Amaya on the All-WAC team. CBS obviously does not get Nevada games on its satellite.

With so much preseason hype going into the year, the question becomes: Will Boise State's 2009 secondary be the WAC's best ever? To find out, here are some of the best ones from the past decade (the WAC became the WAC as we mostly know it back in 1999).

As you can see, there has rarely been a consensus, dominant secondary in the WAC over the past 10 years. The two teams that came the closest were:

The 2000 TCU secondary was part of the Horned Frogs' back-to-back WAC champions. They pulled the same stunt that the Broncos pulled last year by placing two starters on the first team (Boise State also had Ellis Powers, albeit listed as a LB) and one on the second team.

San Jose State's 2007 secondary would be the only other WAC secondary to get consideration for an all-time best, but that distinction is based more on the talent of two individual players and not the secondary as a whole. Both Lowery and Owens were picked up by NFL teams and were considered to be some of the most NFL-ready WAC defensive players to come out of the conference in recent years.

Are there any other secondaries that spring to your mind as some of the WAC's all-time best? Should 2007 San Jose State even be considered with only two solid players? Anyone remember that TCU team?

The WAC's best secondary players in 2009

One obstacle that could keep the 2009 Broncos from going down in the WAC's record books as the conference's all-time best is the competition from fellow conference DBs and safeties.

An initial look at the conference shows that LaTech's Antonio Baker and SJSU's Duke Ihenacho are the two players who could most easily slip onto the WAC's first or second team. Idaho's Shiloh Keo is a media favorite because he is one of the few Idaho players the media knows by name. Fresno State's A.J. Jefferson and Moses Harris are darkhorse candidates, and Nevada's Jonathon Amaya could make some noise.

Of course, is ending the season on the All-WAC team the best way of determining all-time best? Are there other factors to consider that would make the debate fair?

Just for fun: Want to switch for past Bronco stars?

This part of the discussion has little to do with the overall question of the legacy for the 2009 Bronco secondary. But I thought it would be fun.

Would you trade any of the current players in the Bronco secondary for any past Bronco stars?

Here are some of the most obvious candidates:

Another interesting angle on this question: Would any of these four players be able to crack the starting lineup on this year's team? What do you think?

The answers to the secondary question are obvious. Either,

I suppose you could find yourself somewhere in the middle of the debate by taking a stance of "We'll have to wait and see" or "There's really no way to measure this." I tend to think toward the latter with most questions like this.

However, I am completely blown away by the talent level of the Boise State secondary in 2009, and I feel that it will go down in history as the best WAC secondary to ever take the field. Top to bottom, at all five positions, and well into the two-deep roster, these guys are great.

I have a feeling that all five (or four, if you consider Venable a LB) won't make the final All-WAC first team, due in part to politics and the peer pressure of not voting for an entire team at one position. But seeing them on the field should tell you all you need to know.

Where would you put the Bronco secondary in the all-time rankings? Would you trade any current Bronco stars for past ones? Will the secondary improve on their 17 INTs this season?