BSU position preview: Does the 4-2-5 defense increase or decrease the value of Bronco linebackers?

Share All sharing options for: BSU position preview: Does the 4-2-5 defense increase or decrease the value of Bronco linebackers?

Boise State's linebacker history runs deep and wide with names like Korey Hall and Andy Avalos dotting the list. Will that legacy become a thing of the past with BSU's move to a 4-2-5 defense? Where does this new look leave the Boise State linebackers? Let's find out.

(You've stumbled upon a series of Boise State position previews leading up to the Oregon game. Previously: The correlation of lineman size to winning. Next up: The legacy of the Boise State secondary.)

Note: Before I get to the linebacker preview, I have a couple thoughts on BSU not naming starting linebackers yet despite promising a decision would be made following Friday's scrimmage. First thought: Were the linebackers really bad in that scrimmage? That's the only reason I can think of for why the team would not name any. If they were all excellent or mediocre, so what? Use the body of work from practice and the previous scrimmage to decide on starters. If they were really bad, then I can understand wanting to send a message or not feeling comfortable choosing anyone until the level of play is better. I mean, if you've already come out and said that a decision would be made, something pretty drastic would have had to happen for you to call the whole thing off.

Which brings me to my second thought: Were Bronco coaches really planning on naming starters at all? Another way of wording this: Did reporters oversell the linebacker decision? It could just be a big misunderstanding with quotes taken out of context, or it could be a sinister plot by the Bronco administration to mislead fans and withhold information until the last second.

I guess there's a third option. Things really are as Coach Pete says they are, and BSU still wants to see the linebackers compete more in practice. But that option is a lot less interesting.

Nothing has been decided on who the starting linebackers will be, so this six-man depth chart encompasses everyone who has a shot.

You'll notice a couple of big names absent from this list: true freshmen John Michael Davis and Allen Mooney. These two future Boise State stars seem to be redshirt sure-things this fall, which will mean they can transition into the starting lineup over the next two or three years. Whenever they get there, they'll be good ones.

General consensus around Bronco Nation seems to have Acrey and Tevis as the starting linebackers come September 3. Acrey was the team's fifth-leading tackler last season, and Tevis is the only OLB candidate with game experience. Those two would be a solid choice, and an intriguing one. Throughout his career, Acrey has seemed to lack that intangible linebacker quality that oozes confidence, which might be why he's had a hard time holding onto a starting role. Tevis lost his starting spot last season after the opener for what seemed to be a lack of sound, assignment football. Long and lanky, Tevis' build is a departure from the Tim Bradys and Kyle Ginggs of last year. It will be interesting to see how Bronco coaches use him, if they decide to.

Nathan Enderle's Heisman hopes weren't the only thing to die in the opening weeks of the 2008 season. Sometime between the Bowling Green game and the Oregon game, maybe as early as Idaho State and maybe not even until LaTech, the Broncos offed the SAM linebacker in the name of progress. Ellis Powers' nickelbacker took over, and the rest is history.

To be sure, the move was the right decision. A fluid, mobile 4-2-5 allowed the Broncos to easily defend against the myriad spread option attacks that they faced on a near-weekly basis. Powers had a season to remember and was named to the All-WAC first team (as a linebacker, ironically). No one has given a second thought to the contraction of 1/3 of the linebacker force - not even incoming recruits (see Mooney and Davis, above). SAM linebacker is gone, and as soon as I'm done writing about it, it will be forgotten.

The season of which we will not speak

The 2007 season was a tough one to stomach if you were the adopt-a-mom for the Boise State linebackers. They got absolutely trashed when the disastrous (and by disastrous, I mean 10-3) season was over.

And to be honest, it was probably a little unfair. As you'll recall, it was a Boise State linebacker who ended that terrifying overtime game against the WolfPack. And linebackers are sometimes only as good as the defensive linemen in front of them or the secondary behind them.

Still, linebacker play was a definite weakness, and it was one of the biggest question marks going into the 2008 season.

The impact of Kyle Gingg and the 2008 linebackers 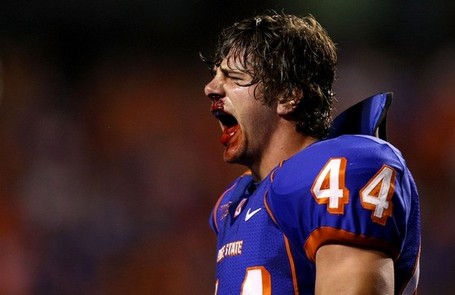 Gingg was there for that bitter 2007, but it wasn't the same Kyle Gingg who held down the linebacker spot in 2008. The 2008 version was a man possessed, and he got better as the year went on. Gingg's final numbers:

Gingg finished third on the team in total tackles (he could have been second, but Powers played in one more game than Gingg did) and even chipped in 2.5 sacks. He was an unsung hero on last year's defense, outshined by Powers, Kyle Wilson, Jeron Johnson, Ryan Winterswyk, and Billy Winn. But without him, the defense would not have been as effective as it was.

His linebacker mates also raised their level of play from 2007. Tim Brady had 42 tackles on the season and 5 TFLs. Acrey recorded 59 stops. Tevis added an interception. The linebackers improved by leaps and bounds over the 2007 unit. They didn't force many more turnovers (six FFs and INTs total), but they were consistently in the right place at the right time. And perhaps, most importantly, they were in the right defense that allowed them to succeed.

What's expected of linebackers in the 4-2-5 defense

A disclaimer: No matter how hard I try and no matter how many times I have cowboyed his name at an Applebee's, I am not Bronco defensive coordinator Justin Wilcox. I never will be. He is a genius, and I am a boob, and he should be the one describing the linebacker's responsibilities in the 4-2-5. But with him not being a boob, that means he is also not a blogger, so you're stuck with me.

Stuff the inside run

The Bronco defense has the athletes to run with players in space on the edge and the smarts to funnel plays back inside where the linebackers can clean up. That leaves the inside running plays as one of the biggest responsibilities that the new breed of Bronco linebacker has. On the spread option, this assignment is obvious. Stuff the running back if the QB hands him the ball. In more traditional offenses, the job gets a little harder as there are giant offensive linemen in their way. Still, the LBs are counted on to clean up those runs. 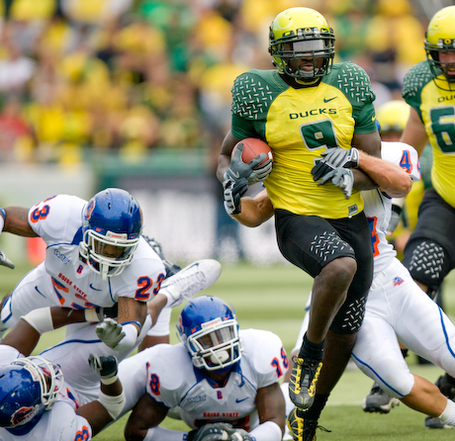 Since they are at the center of the action, the onus is on the linebackers to bring down ball carriers when they have a chance. Missed tackles were one of 2007's greatest themes with opponents slipping through on a fairly regular basis. Last year, Gingg was as sure of a tackler as they come. Acrey is solid as well. I wouldn't be surprised if tackling is one of the most important factors when the Broncos choose their starters for this fall.

With only two of them on the field at most any given time, linebacker turnover numbers are sure to be smaller. But there are so many different ways that this position can make a difference. Big plays could mean a stop on third and short or a pass broken up on a screen or drag route. Whatever way they can find to make a difference, it is tantamount that the LBs pull it off.

Responsibilities the linebackers lose in the 4-2-5 defense

Leading the team in tackles

The Nevada game serves as Exhibit A for this role. Safeties and nickels are better suited to chase down slippery quarterbacks, and the Bronco defense put these players in the best position to make that happen. It makes sense to have the hard-nosed linebackers sticking to what they do best on the inside of the defense and not getting isolated in no-win situations on the outside.

As teams have shifted to an increased number of athletes in the passing game, and as tight ends have developed into essentially giant WRs, linebackers have had a harder and harder time covering them. The nickel/safety accounts for this. Boise State linebackers still regularly drop in coverage, but they are far less often chasing 4.3 players down the field. Boise State's stellar secondary is far better suited to do most of the work in pass defense, allowing the linebackers to handle all the underneath routes.

How do you view Bronco linebackers now that the 4-2-5 has taken over? Are they any less valuable than before? There are few different ways to look at it.

And when you take the conversation to the bigger picture, how do you think linebackers fit in?

There are probably some responses that I haven't touched on here. Do you feel a different way than any of these listed?

If I were to give my opinion, I would say that I am high on Boise State's linebackers being as important as ever and a vital part to the defense's resurgence. I don't say this to reduce the impact of the nickel/safety because I still think that position is one of the greatest inventions of the 21st century. But I have been able to notice just how important the linebackers' role is to the greater good of the defense. The safeties make their plays because teams are forced to go away from the run. They're forced to go away from the run because of the linebacker play in the middle.

What are your thoughts? Are you high on the linebackers or low on them? How much of their success can be attributed to the Broncos' stellar defensive tackle rotation? If you could replace the linebackers with nickel safeties, would you do it?