The atomic clock actually says that we have just 11 days (we're at 10...but you didn't think I'd skip Kellen, did you?) until the Ducks hit the blue turf (hard).

So, today we'll continue our countdown by briefly highlighting the Bronco player with the jersey number that corresponds with the number of days remaining till the opener. Sorry there isn't a more clear and concise way to explain that. My wedding anniversary was yesterday and take it from me, fellas...you don't want to write blog posts on your anniversary. Today's post is a make up.

,/br> The backwater Mayberry that is Prosser, Washington has a big secret. This little community on the banks of the Yakima River is to football what Hickory was to basketball. The last 23 years, under head coach Tom Moore, the Prosser Mustangs have amassed a 234-38 record, won four state titles, and missed post-season play only twice. Prosser's legend may continue to grow, however, despite Tom Moore stepping down over the summer. You see, Tom's son Kellen is already getting the G.O.A.T. treatment in Bronco Nation—and he's yet to begin his sophomore season. Is this too high of praise for the kid with the "aw, shucks" mentality and the Opie haircut? I don't think so...and neither does anyone else. Kellen Moore will rewrite nearly every record in the Bronco record books by the time he's done—just like he did in Prosser. And man, it's gonna be fun to watch.

People's expectations of Moore, after being named the starting QB before the 2008 opener were cautiously high. High because we knew that he'd beat out a heavily-favored senior for the gig—cautious because he was "only" a freshman. Well, consider expectations exceeded. Moore showed early and often why Bronco fans were foolish to fear as he not only finished 12th in the nation in QB efficiency en route to WAC Freshman of the Year honors...he walked into one of college football's most intimidating stadiums and threw for 386 yards and 3 TDs. Kellen finished 2008 with a mind-numbing-for-a-frosh 69.7 completion percentage, 3,486 yards, 25 TDs, and Freshman All-American honors. Moore received the Award of Distinction from the Touchdown Club of Columbus in the offseason and has been named to numerous watch lists and preseason teams. In short, Kellen Moore is awesome (Thomas Byrd said so), and getting awesome-er. 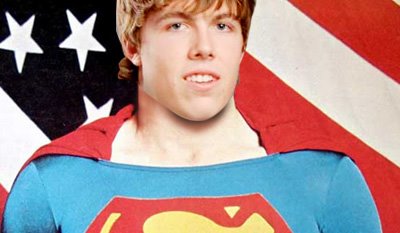 The only thing I added to this picture was the flag.

At Prosser High School Kellen was the B.M.O.C. He was named Velocity/Prep Star All-American, Washington's Gatorade Player of the Year, State Player of the Year, first team All-State, and Seattle Times Class 2A MVP. This was all as a senior. That year, he threw for 4,269 yards and 67 TDs (note: this is ridiculous) against only 7 INTs. His junior year saw him set Washington state single-season records for passes completed (317) and passing yards (4,600) and 66 TDs (note: still ridiculous) against just 15 INTs. All told, Kellen's illustrious high school career saw him set 5 individual Washington state records, pass for nearly 11,400 yards and 173 TDs. These numbers are made all the more mind-boggling by the fact that as a junior and senior, Kellen rarely played the into the 4th quarter. Kellen is not the type of QB to suffer a sophomore slump, though his 69.7 completion percentage may be a touch harder to match or beat after losing Jeremy Childs and some experienced receivers. Moore should be near or at the top of many national rankings by year's end and recieve some Heisman hype in 2010 and 2011. He will also likely fail to be voted WAC Offensive Player of the Year because a certain lanky fellow down in Reno runs well. Our Kellsy will be tested right out of the gate by Oregon in a mere 10 days. Our Kellsy will prevail.