Like many of my college dating experiences, Boise State's fall practice will be over before I know it.

The last hurrah for the Broncos happens tonight at 7:00 at Bronco Stadium with the final public scrimmage of the fall. Come early for the drills (actual scrimmage action won't start until 7:30) and stay late for the autographs (Richie Brockel and Kyle Wilson will be signing BAA-approved items).

Afterward, head back to OBNUG to discuss. There may be snacks or, in lieu of snacks, a lengthy, descriptive recap.

1. What will happen with the linebackers?

The biggest revelation of the week was that the starting duo will not be Derrell Acrey and Hunter White, the presumptive LB starters since, oh, about 24 hours after the P-Bowl. Both players are competing at the same MIKE linebacker position.

The second biggest revelation of the week was that new linebacker coach Jeff Choate wants the winners of the LB competition to be the main guys at the position all season long. No mass substitutions on alternating series. No quick hook for a bad play. No co-starter role on the depth chart.

And today is the day that the everything gets decided.

Last week's scrimmage had Acrey and Percy with the first-team defense and White and Tevis right behind. Will the lineup stay the same for tonight? Is Jason Haberman's J.C. Percy the real deal? Does this mean that John Michael Davis and Allen Mooney are redshirting for sure?

If you had to only watch one position tonight, make it the linebackers. See how they move sideline-to-sideline. Watch how they take on and shed blocks. Find out which ones are the best tacklers. And then email Coach Choate immediately following the scrimmage to let him know your vote. I think he'll be okay with that. 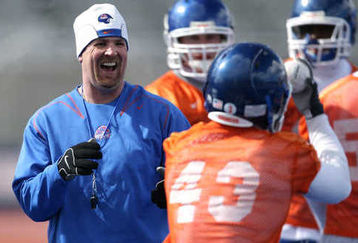 "Are you kidding? I love emails!" (via cdn.bleacherreport.com)

2. Is the running game going to be in attendance?

It was noticeably absent in last week's scrimmage, unless you consider swing passes and bubble screens as part of the running game. And actually, the BSU coaches might think that way.

Still, it would be nice to have some forward momentum for a series or two from the ground game. Here is what offensive coordinator Bryan Harsin is looking for.

"It wasn't necessarily that guys were missing blocks or not hitting the hole, it was just that they weren't in the right position, the right place," offensive coordinator Bryan Harsin said.

I saw a lot of them three yards deep in the backfield. Would that constitute not being in the right place?

Other questions within the question: Will Jeremy Avery suit up? Does D.J. Harper continue to get goalline carries? Who's No. 3: Jarvis Hodge or Matt Kaiserman? Will a better running game diminish the perceived strength of the Boise State run defense? Why are we asking ourselves the same general questions about the running game that we were asking last season?

3. Who's starting, who's sitting on the offensive line?

Last week's starting unit was (from left to right) Matt Slater, Will Lawrence, Thomas Byrd, Kevin Sapien, and Michael Ames. Has anything changed since then?

We know that Cory Yriarte is out for the season with a knee injury. We know that Nate Potter struggles remembering the snap count. We know that there are some talented freshman who will be very good some day.

But there's still a lot left to be decided. No one has said for sure which starting lineup we'll see come September 3. Bronco fans seem to be high on Potter, meaning his getting beat out by Ames is sort of a surprise. Will Potter find himself back in the starting lineup tonight?

In case you hadn't heard, the sky is falling, the world is ending, and God no longer loves anyone now that Boise State's defensive tackle depth has been called into question. The Broncos will start the season minus the services of suspended/injured/Canadian Michael Atkinson and injured backup Greg Grimes. That's the bad news.

The good news is that starting DTs Chase Baker and Billy Winn are very, very good.

The news yet to be decided is how solid Nisby and Hayes will be when they spell the two starters.

You might remember Nisby from his getting winded in basic drills last fall. You might remember Hayes as an offensive lineman. Both players can be very solid defensive tackles, and it will be interesting to see how far along they are - and if they're ready for a big role come Sept. 3.

A subplot to watch is who might step up besides Nisby and Hayes? You have to love fall scrimmages - the American's Got Talent of the college football season.

5. What are you going to be watching?

I really only had four questions, so I thought I'd leave the last one up to you readers. What do you hope to learn from tonight? Whom are you going to watch? The kicking game? Kellen Moore? Pass defense?

And for those of you out-of-towners, what information do you want me to get for you? Starters? Particular plays? Facebook usernames of all the players? You name it, and I'll either get it or make it up. It's a little something I like to call journalism.