The loss of Ian Johnson would have brought Bronco fans to their knees in 2007. But in 2009? Bring on Jeremy Avery.

Johnson's understudy for 2008 has very few people talking about the Broncos' depth at RB, which is too bad. Behind Avery sits a potential star in D.J. Harper. How he got buried there, what his true value is, and how Bronco fans feel about him is all up for debate.

(Thus begins the first in a series of Boise State position previews leading up to the Oregon game. Previously: The mobile QB debate. Next up: WRs and the big play.)

There is no doubt that Avery is firmly entrenched as the No. 1 running back. The only thing that could budge him from that role is if he was not 100 percent healthy, which, coincidentally enough, he was not for the team's first scrimmage. The drop-off behind Avery and Harper appears to be substantial. Hodge and Kaiserman will most likely not see the field except in garbage time, especially with the Bronco coaching staff's new emphasis on finding a rhythm for the starting RBs.

I fondly remember Harper's coming out party against Fresno State in 2007. Ian Johnson was hurt. The Broncos were looking to avenge a 2005 loss on Fresno's home field. Harper took over from there.

When all was said and done, Harper had 153 yards on 19 carries, including a 22-yard TD run that erased Fresno State's only lead of the game and stopped a string of 14 unanswered Bulldog points (including a punt return TD right before the drive).

It wasn't just the statistics that Harper piled up; it was the way he earned those 150-plus yards. He ran with conviction and a purpose, and he looked like a future Bronco star. The kid was a true freshman. He had a bright future ahead of him.

Ironically enough, so did another freshman RB. Avery stole some attention from Harper's Fresno breakout game with 100-plus yards and three scores against the Bulldogs. Those big numbers followed a breakout performance a week earlier against LaTech when Avery had 189 all-purpose yards and two more scores.

Harper's feel-good story was pretty much over after the Fresno game. He battled through some late-season injuries and only accumulated 20 more carries over the team's final five games. His 2008 was more of the same as Johnson and Avery got the bulk of the attention in the backfield. Harper never had more than nine carries in a single game. His best showings were two scores against LaTech and 67 yards versus Idaho. Again, ironically, Avery set a team record for ypc in the Vandal game. 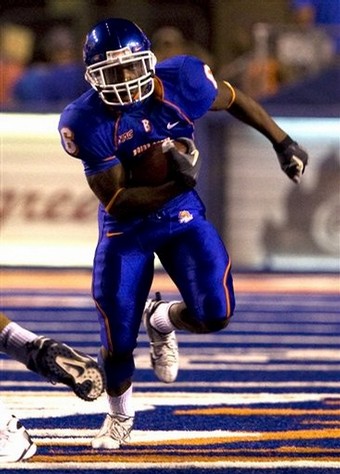 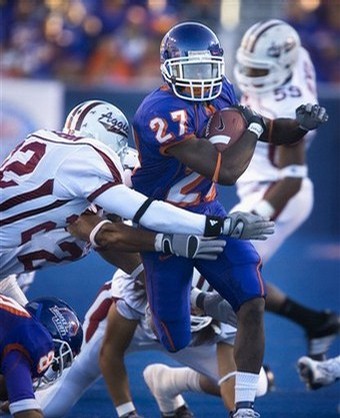 Though both stand at only 5'9", the perceived skillset for each player is decidedly different. Avery is thought of as the scatback type - a guy who can break ankles with sick moves and escape out of a phone booth if need be. Many people peg Harper as more of the smashmouth, bulldozer running back.

But are these stereotypes correct?

Here is some food for thought: D.J. Harper is the fastest guy on the team. His 4.34 40-yard dash time was tops among all Bronco players.

It is possible that Harper's attributed running style is more a matter of fans wanting to generalize RB duos as Thunder & Lightning, even if the real styles are more Lightning & Lightning. Is this the case with Avery and Harper?

Watching Harper in practice and in games, I don't see the traditional smashmouth player. For me, he can best be described as hard-to-bring-down, which is some of the highest praise you can give to a running back. Ian Johnson had vision. Avery has moves. Harper has determination, balance, and desire.

Another attribute that people tend to overlook about Harper (or, perhaps, another reason why the smashmouth label sticks) is his penchant for goalline carries. Last year, the Bronco coaches handed goalline packages to the running back who performed best in those situations in practice the week prior. Routinely the job fell to Harper, despite Ian Johnson chasing a TD record all season long.

For Harper to take that job from Johnson speaks volumes about his ability. He is successful in goalline packages because he is hard to bring down, he is small enough at 5'9" to fit through tight spaces but solid enough at 192 pounds to move a pile, and he has a nose for the end zone.

Harper's receiving totals are so sparse that it is hard to tell how valuable he could be in the passing game. Last year, he had four total receptions. Avery nearly matched him in the Utah State game alone.

Why does Harper get so few balls thrown his way? Well, there are a number of possibilities.

I can't imagine that good things wouldn't happen with the ball in Harper's hands in open space, especially given his raw speed and determination. Part of the battle for RBs on screen passes is being patient enough to let your blocks set up in front of you. If Harper lacks this skill, then it may keep him out of these situations in the future. 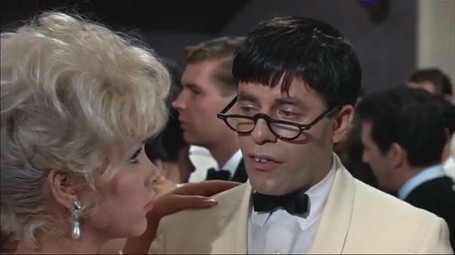 Several weeks ago, we hosted some preview content from Football Outsiders, the Internet's best source for advanced statistics. In an interview with the preview author, he discussed the loss of Ian Johnson and the 2008 comparison of the three main Bronco running backs. Surprising or not, Harper held his own in the comparisons.

Success Rates are determined by yardage gained according to the following: 50 percent of needed yards on first down, 70 percent on second, 100 percent on third or fourth.

PPP is a measure of explosiveness based on yards gained from certain places on the field.

S&P is a combination of Success Rates and Points Per Play.

Fascinating, right? I think that a big portion of the question of "Does D.J. Harper get enough credit?" is recognizing how hard it is to measure Harper's contributions to the team. These statistics help paint somewhat of a picture of Harper's value, whether you believe in these sort of stats or not.

The success rate is what stands out the most to me. I greatly value this statistic because I think first downs and manageable second and third downs are some of the most important goals an offense can have. Getting first downs extends drives, increase time of possession, and gets a team closer and closer to scoring points.

And Harper was the best running back for success rates in 2008.

Granted, the percentages are close enough to be considered fairly equal across the board, but if you start looking at the stats with a bias against Harper, seeing him at the top of a ranking as important as success rate should make you value to the team.

Harper is good at what he does when given the chance to do so. The advanced stats lend credence to this.

On virtually every depth chart iteration I have seen, Harper is No. 2. You can expect him to be the first running back off the bench to spell Avery, and he may even get a series or two of carries on his own. With the coaching staff wanting to move away from the three-headed RB committee of 2008, a more focused version of Avery, then Harper should benefit the offense.

Harper was solid in goalline situations last season, so he could be expected to carry that role into 2009. He received carries in that package during the first fall scrimmage, but with Avery out due to injury, it is hard to tell if Harper was in there as the team's first RB option or as the go-to guy in goal-to-go.

Avery is the clear-cut starter. I would expect him to average 15-to-20 carries a game, depending on the score, the success of the offensive line, and the situation.

Durability is always a question when you are dealing with 5'9", 170-pound running backs, and seeing Avery sans pads for the first fall scrimmage wasn't a good sign. (Plus, his mysterious absence for most of the Poinsettia Bowl was never really addressed but doesn't seem to be holding him back any this season.) Until Avery shows a penchant for always being nicked up, I think it is unfair to question his durability. He's as tough as they come, and he'll need to be as the Broncos' lead back.

I'm particularly excited to see Avery take part in the passing game this fall. Ian Johnson had 25 catches last year and some memorable screen catches and runs. Avery will be exciting to watch in open space and should see his 14 catches from 2008 at least double.

It should be noted that the discussion of D.J. Harper is in no way a slight on Avery. I am thrilled to have a game-changing back in the backfield. I am even more thrilled to know that we have two who are capable of taking over a game.

Where do you stand on the D.J. Harper conundrum? There are a few reactions you can have to Harper's situation, and here they are. Let me know if I missed any.

As one who doesn't like to rock the boat, I kind of feel that Harper is just unlucky with the timing of his Boise State career. Sitting behind a back like Avery is nothing to be ashamed of, but at the same time, I have seen glimpses of greatness from Harper that I really want to see more of.

If given the chance, I know Harper will shine, and should anything happen to Avery, Bronco fans should have no need to panic. Harper is better than a lot of people realize. Maybe some day he'll get a chance to show everyone.

How do you feel about D.J. Harper? Let's hear it.