BSU position preview: Would Broncos be better suited with a mobile quarterback?

Share All sharing options for: BSU position preview: Would Broncos be better suited with a mobile quarterback?

In case you've been living under a rock or inside Graham Watson's spellchecker the past two years, let me bring you up to speed on the state of college football: Mobile quarterbacks are in. The spread option is hot. And Boise State has neither in its base offense.

Of course, instead of the razzle-dazzle legs of a mobile QB, the Broncos have the Midas arm of Kellen Moore, which was good enough to set BSU records and lead the team to an undefeated regular season last year. So does it matter that the Broncos are behind the curve on the emerging trend of college offenses? Let's talk about it.

(Thus begins the first in a series of Boise State position previews leading up to the Oregon game. Next up: Running backs and the enigma of D.J. Harper.)

Indubitably, Kellen Moore is the Broncos' starting quarterback. From what we saw last year, it would appear that Mike Coughlin will make cameos in a) garbage time and b) special Mike Coughlin packages where he jumps to throw and makes regrettable decisions in goal-to-go read options. There is a chance that Southburo could see the field, but only if the apocalypse came and Moore and Coughlin went down with injuries.

If it is any consolation, Moore's rushing numbers are not as bad as you might think they are, especially if you have seen Moore run. He fits right in with a number of other college quarterbacks who are pass first, pass second, think about running third, pass fourth, and run fifth if they have to.

Interesting enough, Moore and his ilk are still in the majority when it comes to college quarterbacking styles. But it is a quickly evaporating majority.

In 2008, there were 38 college QBs with 100 or more carries. It should be noted that the NCAA includes sacks as rushing statistics, so I bumped up the number of attempts to account for this oddity. A better statistic to measure mobile QBs is, of course, rushing yardage. And here, the numbers are similar. Forty college QBs had 300 yards or more rushing. Twenty-six had 500 or more.

Then there is the issue of mobile quarterbacks on successful teams. Here is a look at the final AP Top Ten from last year with starting quarterback rushing yards.

Half of the teams in the Top Ten had a very mobile quarterback calling signals for them.

Let's be clear about this discussion. A mobile quarterback can include a variety of different styles. The most common is the read option/spread option quarterback who is a threat to run. This would include your Colin Kaepernicks and Terrelle Pryors. Most schools with a running quarterback have some sort of read or spread option package among their base plays.

Mobile quarterbacks also include playmakers who can extend plays with their feet and escape pressure to pick up extra yards. This would be the Jared Zabransky-type player who doesn't necessarily get his name called for particular plays but can make up yards with his legs anyway.

One interesting topic of discussion for mobile quarterbacks could be if tough-to-sack QBs can be considered mobile. What do you think? There is certainly a case to be made that if the guy is hard to bring down, he very well could be called mobile. Kellen Moore could easily fall into this distinction, too, as he routinely steps away from pressure and is stellar at slipping away from defenders.

If the third qualification is accurate, then do the Broncos already have their mobile quarterback?

Boise State's most recent runner was Zabransky. In the 2006 Fiesta Bowl season, Z averaged about three yards per carry and scored six touchdowns on the ground. Even then, coaches weren't really designing runs for Zabransky so much as he was just sort of taking off with the ball when he had nothing better to do. Sometimes it saved a down or kept a drive alive. Other times it made me throw things at the television. I consider it a wash. 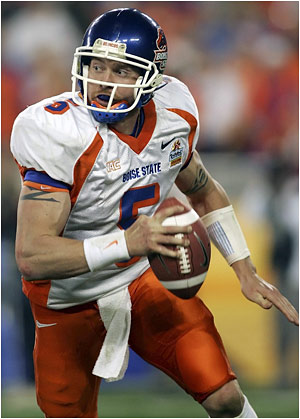 After Zabransky, we were treated to the mostly immobile Taylor Tharp. In fact, whenever Tharp left the pocket, you could be sure that bad things were probably going to happen. In the team's three losses that season, Tharp was anxious to stop looking downfield and start looking to scramble. It was like watching a kid read a choose-your-own-adventure book that you already know the ending to and you know he's choosing the wrong page. Never go to the lake to gather clues. Never!

What can you do with a mobile quarterback? Well, for one, you can go 19-for-50 passing. But more on that later.

The most popular and obvious scheme is the read/spread option. The Bronco coaches estimated that upwards of nine or ten teams on their 2008 schedule ran an offense similar to the spread. Everyone's doing it unless your starting quarterback is an Enderle or a Brandstater.

Mobile quarterbacks are also used often for rollout pass/run options and the occasional quarterback draw to catch the defense off guard. At the very least, a mobile quarterback adds another dimension to the offense, and it makes defensive coordinators gameplan for yet another something or someone.

I've touched on a few of the benefits of a mobile quarterback already, but here they are again in a nutshell. (Feel free to add your own benefits I may have missed in the comments.)

The benefits might sound great, and that's where a lot of recruiters, fans, and coaches stop when they consider the mobile quarterback conversation. But you can't have this debate without looking at the negatives of a mobile quarterback.

I told you I'd come back to that 19-for-50 throwing performance. We all remember with great happiness Kaepernick's horrific passing day against the Broncos. His passing numbers are typical of what you can expect from a running quarterback. Most mobile quarterbacks do not complete as many passes as their more traditional counterparts.

There are a couple reasons for this.

A free pass to the injury report

Another drawback to mobile quarterbacks is the increased risk of injury. Any time you have your QB running beyond the line of scrimmage into the land of linebackers and safeties, it could spell trouble. Ask Russell Hill.

Quarterbacks are not the ideal person to be carrying the ball downfield. Their forays beyond the line ramp up the possibility of a fumble.

How the Bronco coaches work around it

Though Kellsy may not be the most nimble of feet, the Broncos still find ways to stick athletes in the quarterback position. The Mike Coughlin package is one way. When Coughlin comes in the game, it is usually to helm a spread option attack that either ends up with Coughlin handing off, Coughlin running, or Coughlin throwing off of play action. While he's not the ideal running quarterback, he can be effective in this package.

Another way that the Broncos use the QB position is with receivers. Tanyon Bissell was in the backfield on multiple occasions last season, and in the most recent fall scrimmage, both Austin Pettis and Tyler Shoemaker threw completed long passes.

Kellen Moore might not win any foot races, but he is at least ambulatory. Moving the pocket by sliding the line left or right helps Moore buy time and extends plays. It is a safe alternative to naked bootlegs and blind rollouts.

Hey, hey. Imagine that. Though Boise State's running game is not exactly clicking on all cylinders right now, BSU has had a very successful ground game in seasons past. The need for a mobile quarterback is lessened in large extent to the work of the running backs. 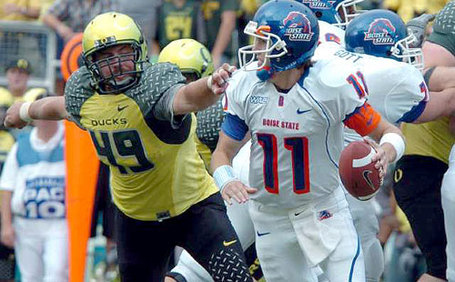 Where Kellen Moore fits in

This conversation would not be complete without looking at Moore's attributes in the passing game. Perhaps the most important part of this whole discussion is how great of a quarterback Moore really is.

Here are some interesting statistics. Moore's completion percentage last season was a stellar 69.4 percent. Among all other quarterbacks in Division I-A, only Colt McCoy, Chase Daniel, and Graham Harrell turned in better completion rates, and only one of those quarterbacks is a serious running threat (McCoy).

Would Colt McCoy be the only D-1A quarterback you would trade Kellen Moore for? Would you swap Moore for Tebow? Kaepernick? Zabransky?

What does that mean to you?

There are lots of different places you can fall on this topic.

Or you can be somewhere in the middle of all these options. There is no right or wrong answer with this question, only room to discuss.

I find myself sitting pretty solid on the first conclusion above. I am completely, 100 percent satisfied with Kellen Moore as Boise State's quarterback. He is solid, amazing, and probably the best true quarterback I have ever seen in person.

I have seen more than my fair share of mobile quarterbacks flame out of starting jobs or single-handedly lose games for their teams. Part of me wants to see a running QB at Boise State simply for the novelty factor. I would be so thrilled to see what all the coaches would do with such a player.

But I feel that Moore gives Boise State the best chance of winning for a prolonged stretch of time.