The atomic clock actually says that we have just 20 days until the Ducks hit the blue turf (hard).

Drew has the weekend off, so you're stuck with me. Let's do this.

He may be the most anonymous true freshman phenom from 2008, but just because Iloka and Hout's names come to mind first doesn't make Taylor any less excellent. The 5'11" Taylor saw time in all 13 games last season, finishing with 24 tackles, one INT (versus SJSU's Kyle Reed), and a pass defensed. That pass had it coming.

Taylor was stellar in high school prior to hitting the ground running with the Broncos. His senior season he was named East County League Defensive MVP when he had 50 tackles and four picks. Surprisingly enough, his junior year was even better. Taylor had 65 tackles, 11 passes defensed, 3 picks, 3 FFs, and 2 FRs. Who won the ECLDMVP that year? Someone related to Colin Kaepernick? Unbelievable. (Seriously, if anyone has the answer, I'd love to know.)

What's even more exciting about Taylor is that he has the privilege of learning under Kyle Wilson for another season. Brandyn Thompson has obviously blossomed into a solid, soon-to-be great cornerback, and there's no reason to think that Taylor can't follow in those footsteps. At the very least, he's going to be at the heart of a lot of "The role of replacing All-American Kyle Wilson" stories next year, so he better be okay with talking on the phone to Bruce Feldman.

Just kidding, everyone! (ed's note: Not really. I miss him a lot.) 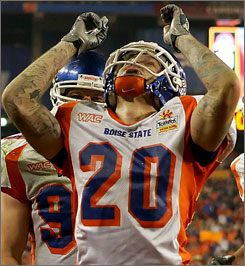 That's right, Burroughs earned the POY honor, although it didn't exactly come with the same fanfare as Martin's. Still, there's no reason to think that Burroughs' future is any less bright, especially with a WR corps looking for depth and playmakers. As long as coaches don't move him to defense any time soon, he's in good shape.

Burroughs, like Taylor, had a phenomenal junior high school season. As an offensive star at Meridian High, he was named the SIC player of the year after rushing for over 500 yards and racking up nearly 1,000 receiving. Oh, and he scored 23 touchdowns. Almost forgot that part.

After a 2007 grayshirt and a 2008 redshirt, Burroughs is ready to contribute in a big way to the Broncos. He slides into the role of "WR depth" this year, so given a good spring, he could be the fourth or fifth wideout into the game. He's built like a Vinny Perretta (5'9", 194 pounds), and the Broncos just so happen to not have Perretta any more. Coincidence? Probably. But it could also mean good times for Burroughs in 2009.