There was a lot of excitement, intrigue, and action in the Broncos' first scrimmage of the fall - so much so that I'm about to get all David Letterman up in here and break down the best plays in a top ten list. Check it out after the jump.

Kyle Brotzman was first up with a line drive tumbler that connected from 56 yards out. As Al Michaels would have likely quipped, "He kicked that one from Twin Falls." After Brotzman, true freshman Trevor Harman (all 6'2", 185 pounds of him) booted a laser from 57. It would have been good from 57 and a half.

9. That one play where the defense stuffed the running game

There were actually a lot of plays where the defense stuffed the running game (essentially, every running play), but I think the D deserves some credit, admiration, and praise for the way that they completely owned the line of scrimmage. One player I didn't mention in my recap yesterday was DT J.P. Nisby. He more than held his own in the middle of the line, rotating between the ones and twos. I would keep my eye on him if you're looking for a breakout player this fall or if you have any fragile wicker furniture around.

Moore threw for 98 yards on the drive (thanks to our good friend, Mr. Penalty), and every one of those yards was classic Kellen Moore. He completed third downs with machine-like efficiency. He connected on out routes and always found the open receiver. He was, in short, himself. And I like that about him.

(Note: Who left WAC officials in charge that drive? There was a string of three or four straight penalties (holding, offensive pass interference, holding) that actually elicited boos from the crowd. You have to be trying pretty hard to get booed by a scrimmage crowd.)

Shoemaker's pass you could see coming from a mile away. He flared out well behind Kellen Moore, almost comically so, and lofted a dying duck to a wide open Pettis. I think Brandyn Thompson was on the coverage. And I use coverage loosely.

Pettis' pass felt like a reverse/misdirection/speed sweep, but it worked just as effectively as Shoemaker's swing pass toss. If I had to rate Pettis' throw, I would give it a six. In other words, it reminded me of Nathan Enderle.

Harper took the opening kickoff up the left sideline, with a good seal block from KR buddy Doug Martin, and outraced the coverage unit to the end zone. Good times, unless you were the coverage unit.

4. Aaron Burks taking a screen to the almost-house

The true freshman wide receiver had his number called several times on jailbreak bubble screens. This time, he caught the screen, found himself in a jumble of players, and next thing you know he was racing down the sideline. It was Houdini-esque.

Kellen Moore's TD sneak on fourth and goal probably shouldn't have been a TD. From my vantage point of at least 75 yards away, I'm pretty sure I saw his knee go down well before the pile stopped moving. Make that 65 percent sure. I think Byron Hout will agree with me, judging by the way he went after the linesman.

Still, you have to credit the defense for a yeoman's effort. On second and third down from the one-yard-line, the D flat-out stoned the offense. Both times Boise State's O tried for a tough run to the right, sort of off tackle. It seemed like they were hoping to exploit the Michael Ames-Byron Hout matchup. Well, it didn't really work. Hout was staunch, and the rest of the defense flew to the ball like tweens at a Twilight trailer movie premiere. It was a sight to behold.

As freshman kicker Jimmy Pavel's punt hung in the Boise afternoon haze, I figured we would see no return from Wilson, considering he had yet to really bring one back full-speed so far in the scrimmage. Boy, was I wrong.

Wilson snagged the punt, dodged the first gunner, then proceeded to dodge nine other punt coverers as he snaked down the field. He took the punt right back up the middle, flying at near full speed in and out of his cuts and jukes. It was like a scene in the Matrix where everyone is going in slow motion except for Neo. Or am I thinking of How to Lose a Guy in 10 Days when Kate Hudson walks into the room? Either way, it was neat to watch. 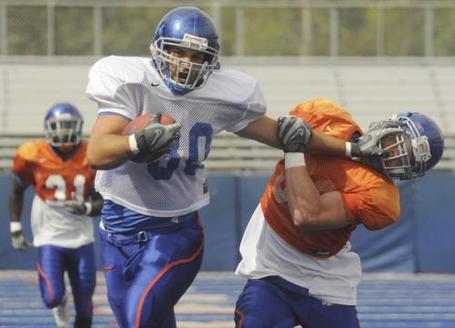 I would describe this play to you, but all you really need to see is Bronco Joe's pic-by-pic account of the scene. It appeared as if the Bronco safeties bit on an underneath route, allowing Efaw to slip past, completely uncovered, a good 30 yards down the field. Great read and pass by Coughlin. Great catch and run by Efaw. Great job by Travis Stanaway to keep Efaw from scoring despite The People's Stiffarm.

Good times all around.